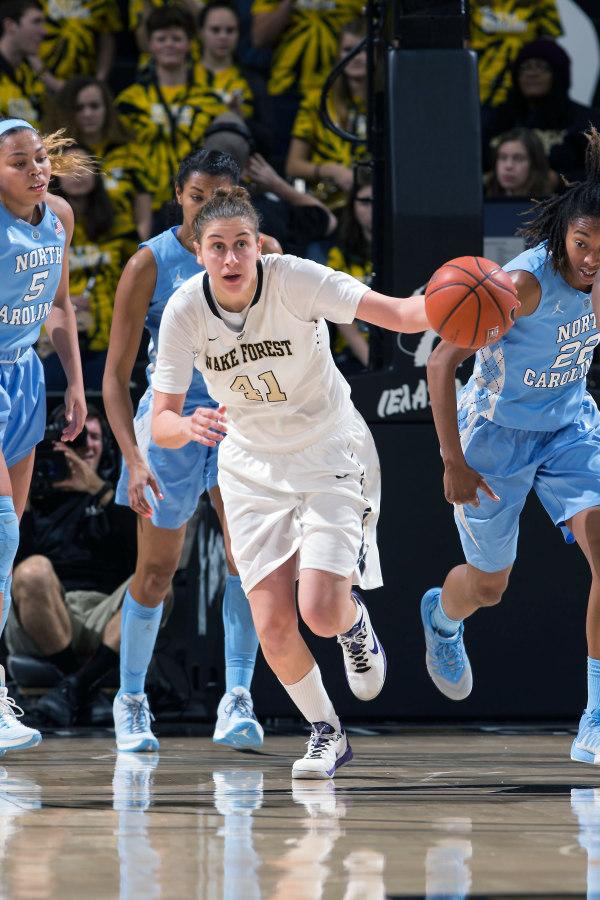 Elisa Penna is a freshman from Burgamo, Italy — just a short drive from Milan.

As a basketball player she is talented, using both her size and shooting ability to set her apart from her peers.

Her shot is very accurate and she rarely misses. Her biggest strength would probably be her basketball IQ and versatility.

She is one of the fastest players on the team and frequently uses her speed to her advantage.

She’s long and can block and steal easily, which is in part because she knows how to read the offense effectively.

She also has a lot of experience playing on elite, international teams, which help not only her skill-set, but the team as a whole.

What are your favorite basketball memories?

I was also named to the All-Tournament team.

I also played with the Greas Basket Milano club team and won four championships, and also won a championship with Reyer Venezia in 2013.

Can you talk about your recruiting process? How did you end up at Wake Forest?

I finished school two years ago and was offered to play in America then, but decided to stay in Italy.

I came to Wake Forest because it was the best path to take in order to achieve my dream of playing in the WNBA.

Coach Jen Hoover is a great resource as well as Coach Clarisse Garcia; they’ve helped me a lot so far.

How do you like Wake Forest so far? Is it what you thought it would be like?

[Wake Forest] has definitely been an adjustment.

My family is from Bergamo, Italy and I didn’t visit Wake before deciding to come here.

So far, it’s been hard just because I came at the start of the spring semester, so I’m still adjusting to America, college life and speaking full-time English.

I miss my brother and sisters who are back in Italy.

Do you know what you want to study at Wake Forst?

I am unsure of what field of study I want to go into because I am just a freshman.

What are your strengths on the basketball court?

Since I am tall and can handle the ball, I can play shooting guard as well as small forward.

I use my height to my advantage because most [tall] players cannot handle the ball well.

How do you prepare for games?

I like to shoot from around the perimeter before every practice and game for almost an hour.