Sam Hartman passed for 244 yards and a touchdown, while adding a score from the ground 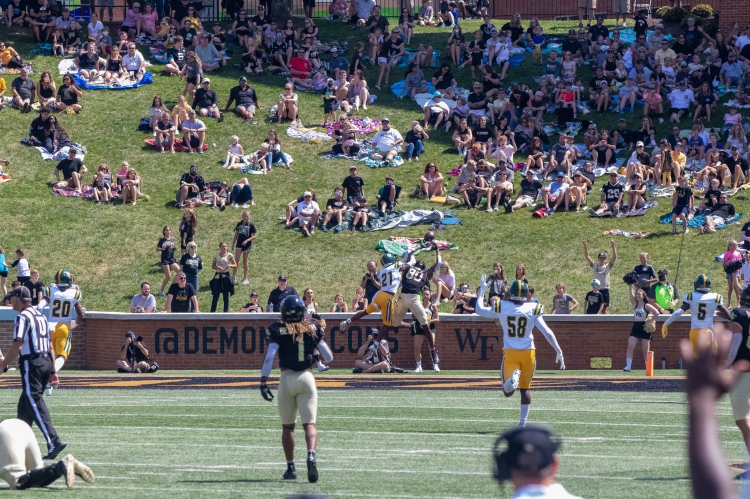 For the second straight week, Wake Forest took care of business against a lesser opponent, defeating Norfolk State 41-16. The Spartans, an FCS team, put up a strong fight early, but Wake Forest was still able to clear their bench with five minutes remaining in the third quarter.

To begin the game, Norfolk State’s offense was efficient against Wake Forest’s first-team defense, much to the surprise of the 22,000 fans in attendance. Over the course of nearly seven minutes of play, the Spartans marched down the field, utilizing a mix of short passes and runs to keep the drive going.

On two third-and-longs, the Demon Deacons had the opportunity to get off the field without giving up points. On both occasions, Northfolk quarterback Juwan Carter made passes of 18 and 16 yards to keep the offense on the field. The third attempted pass from Carter on third down fell incomplete, allowing kicker Josh Nardone to knock through a 41-yard field goal, giving the Spartans the lead.

The drive from the Spartans took the wind out of the raucous student section’s sails, but Wake Forest responded. Where Norfolk State took their time, the Demon Deacons moved quickly, taking less than two minutes of game time to move 65 yards in six plays.

Redshirt sophomore quarterback Sam Hartman kicked off the drive with two straight passes to receivers A.T. Perry and Jaquarii Roberson. Then, redshirt junior running back Christian Beal-Smith put his signature on the drive with consecutive runs of 11 and 24 yards. Hartman then strode into the endzone from four yards out.

On their second drive, Norfolk State proved that in order to keep themselves in the game, they would control the clock, eating seven minutes on a 12-play, 29-yard drive. That drive culminated with a punt.

In response, Wake Forest kept on marching. The Deacons utilized a balance of runs and passes to move down the field. On the drive, Hartman found Roberson twice for 14 and 12 yards. For most of the drive, though, Beal-Smith was the go-to Demon Deacon, rushing five times for 17 yards. The running back capped off the possession with a three-yard power drive into the endzone.

In their third time on the field, the Wake Forest offense scored a third straight touchdown. On this drive, despite Hartman still being under center, the depth players were the focal point. Redshirt sophomore Christian Turner led the way at running back with four rushes.

In the passing game, Hartman honed in on freshman Ke’Shawn Williams (two receptions, 19 yards) and redshirt senior transfer Donald Stewart (two receptions, 35 yards). To close the drive, Turner ran in his first touchdown as a Demon Deacon from three yards out.

Down 21-3 at this point, the Norfolk State offense went on the attack. Correction, Carter went on the attack. Out of the nine plays on the Spartan drive, eight were either a Carter pass or quarterback run. The final play of the drive, once again involving Carter, was a 10-yard pass to wide receiver Rayquan Smith. A missed PAT from Nardone kept the score at 21-9.

In the final minute, Wake Forest orchestrated a no-huddle drive to set up a field goal attempt for junior Nick Sciba from 46 yards; he hit the mark with distance to spare. The kick is the third-longest of Sciba’s career, and his longest since the Birmingham Bowl in 2018.

For Hartman and the Demon Deacon offense, it didn’t take long to score in the second half. On their first play out of halftime, Hartman found Roberson deep for a 64-yard touchdown.

Following a Norfolk State three-and-out, kicker Nick Sciba got his second field goal attempt of the day, knocking the kick through the uprights from 22 yards out.

After a blocked punt by redshirt sophomore Rondell Bothroyd, the Demon Deacon offense cashed in with another Turner run for a touchdown.

With Head Coach Dave Clawson bringing in his depth players, the Spartans capitalized one more time for a score: a Carter touchdown pass for three yards. The 41-16 scoreline stayed true until the final whistle.

After the game, Clawson expressed his pleasure with the win, but also his desire to continue to grow.

“We got the win, were able to play a lot of players and we emptied the bench with about five minutes left in the third quarter,” Clawson said. “Obviously, the challenge of the season is to be able to take a big step forward against Florida State. [Right now] we are where we need to be.”

As Clawson referenced, Wake Forest will need to take a big step forward next week at home against Florida State University, their most difficult competitors to date.

The Seminoles narrowly lost in their first game to Notre Dame before being upset by Jacksonville State on Saturday.