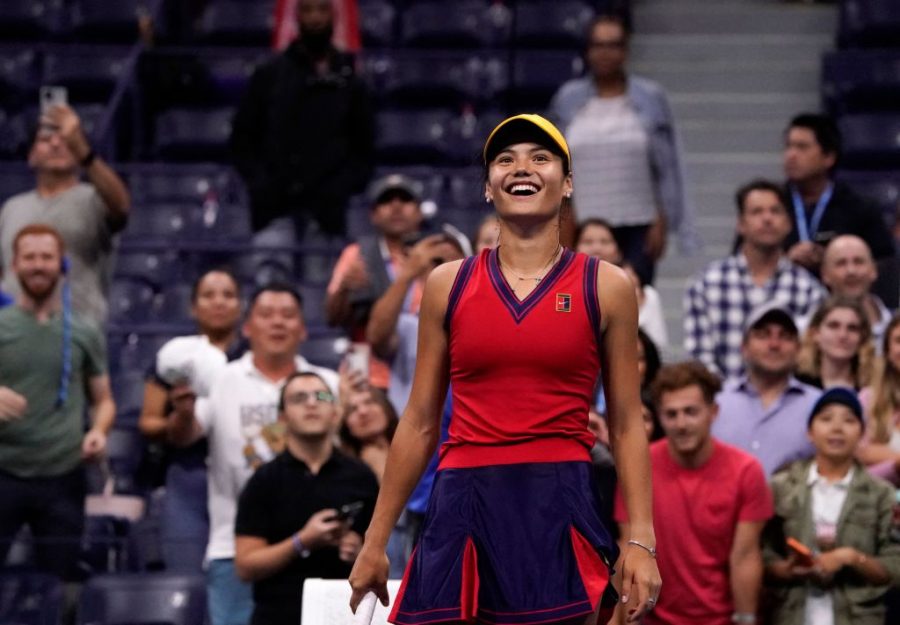 The 2021 U.S. Open promised to dazzle and entertain as the biggest names in tennis descended upon New York for the fourth and final Grand Slam event of the year. Fans once again passed through the turnstiles of the Billie Jean King National Tennis Center and restored the emphatic energy absent from last year’s event.

Despite the loss of big names such as Roger Federer, Rafael Nadal and Serena Williams due to injury, the event hosted a slew of new stars. The major tournament had its highs and its lows, but it is clear the future of tennis is brighter than ever.

In women’s singles, teen sensations Emma Raducanu and Leylah Fernandez made historic runs to the final, which was the first ever to feature two unseeded players. Raducanu defeated Fernandez in straight sets (6-4, 6-3) to claim her first Grand Slam title.

Fernandez, the 19-year-old Canadian, had a Cinderella story-esque run to the final, upsetting countless opponents en route. She beat defending champion Naomi Osaka, Angelique Kerber, Aryna Sabalenka and Elina Svitolina leading up to the final. Since she was unranked, Fernandez was the underdog in every one of her matches, yet her grit and determination shone through and quickly made her a fan favorite.

Osaka’s third-round exit at the hands of Fernandez added another setback to what has already been a difficult year for the superstar. For Osaka, the U.S. Open was her first grand slam appearance since dropping out of the French Open and choosing to sit out Wimbledon. As her stardom has grown in recent years, Osaka has not been shy about expressing the impact it’s had on her mental health. In a post-match press conference, Osaka fought back tears and said she might take another break from tennis.

In addition to Osaka, U.S. tennis star Sloane Stephens has also opened up about her mental health struggles since her loss in the U.S. Open. Stephens received well over 2,000 abusive and hateful messages on social media following her loss to  Kerber.

Always being in the limelight can take a toll on anyone. With athletes now more vocal than ever about their mental health battles, they are providing hope and inspiration to countless individuals showing that it is truly ok to not be ok.

For 18-year old Brit Emma Raducanu, the sky’s the limit. In June, she made her Grand Slam debut at Wimbledon; now, three months later, she is a Grand Slam champion.

What’s even more impressive is the utter dominance Raducanu displayed on her way to the title. In her three qualifying matches and seven main draws, she did not drop a single set. When you add that up, it amounts to 20 straight-set wins, an absolutely incredible feat. With her ace to seal the victory, Raducanu capped off the perfect ending to her U.S. Open fairy tale.

Regardless of Raducanu’s straight-set victory in the final, the match was hard-fought, and each competitor brought forth a competitive spirit and poise to their play. The final was played on the 20th anniversary of the Sept. 11 terrorist attacks, and in her closing remarks Fernandez said, “I just want to say that I hope I can be as strong and resilient as New York has been the past 20 years.”

This will certainly not be the last time we see these two, as we can be sure they will be ready to bring the sport into the next decade.

On the men’s side, Novak Djokovic entered the U.S. Open with hopes of completing the calendar Grand Slam. The Serbian national was ready to build on victories at the Australian Open, French Open and Wimbledon, but his plans were quickly foiled by Russia’s Daniil Medvedev. Medvedev, mirroring Raducanu, dominated his opponent to win his first career Grand Slam singles title (6-4, 6-4, 6-4, straight sets).

Djokovic’s thrilling semifinal match on Thursday against Alexander Zverev was a five-set epic that took its toll on both players. Medvedev’s path to the final was slightly easier, as he dropped only one set throughout the entire tournament. This disparity was apparent early on, with Djokovic appearing to be fatigued from the get-go. Once Djokovic got going, though, the momentum had already swung Medvedev’s way. The rest is history.

Any casual tennis fan who did not pay enough attention to the tournament would be shocked by many of the outcomes and the champions. The U.S. Open provided amazing storylines and evidence that tennis is entering a new, unprecedented age.