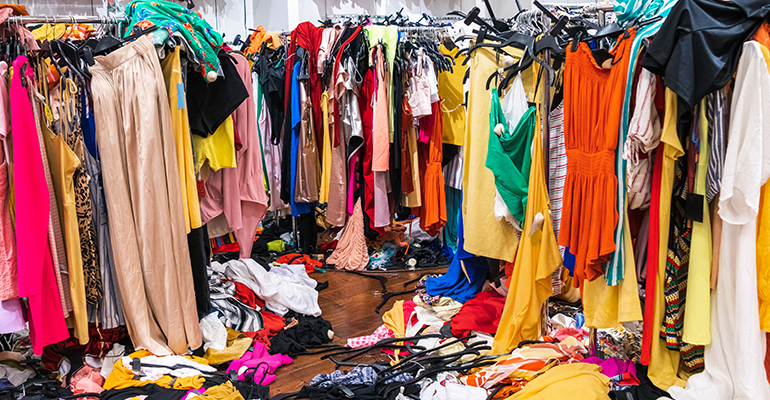 There has been an apparent shift in how class structure visually manifests itself in America. As it becomes more difficult to evaluate one’s socioeconomic status based on clothing alone, companies have found a new avenue through which commercial exploitation can be practiced: fast-fashion.

Currently, most clothing bought and sold in the United States can be divided into three distinct subcategories: fast-fashion, secondhand clothing and high-end apparel.

As a result of these procedures, the quality of the clothing is often poor, and the clothes themselves do not last as long — this results in the rapid, wasteful consumption and disposal of  products. Some culprits of fast fashion are corporations like H&M, Fashion Nova, Shein and Zara.

Secondhand clothing is pretty self-explanatory — it is any clothing that is acquired in used or preowned condition.

When people buy from thrift stores, online shops such as Depop and Mercari or wear hand-me-downs, they are being environmentally conscious by decreasing the amount of production and waste that results from clothing manufacturing in the United States — assuming they are only purchasing clothes that they truly need.

Finally, there’s high-end fashion — which is the broadest of the three categories. High-end fashion is more likely to be ethically produced and long-lasting, but the price barrier excludes the overwhelming majority of Americans from these brands. Although there are certain brands that are sustainable and reasonably priced, these companies are often relatively unknown and minimalistic in nature, which further contributes to their lack of inclusivity.

Even if people can afford the often ridiculous prices of high-end fashion and are able to get to the store before the inventory is sold out, there may not be any clothes that fit their body type. It is this increasingly polarizing phenomenon that puts American consumers in an extremely difficult position. Those who lack financial privilege but care about their appearance and want to express themselves are often forced to choose between being morally or socially conscious.

If one cannot afford what they want to wear, they face a conundrum of whether to turn to cheap look-alikes that allow them to be perceived as wealthy and stylish, or to buy second-hand clothing that could be negatively received and damage their self-image.

Now, this all is not to say that thrifting is a bad or unfashionable practice in the U.S. today. In fact, for many, it is a popular and trendy thing to do. While this shift toward sustainable fashion is an overall positive one, there is a subtly predatory practice emerging in this benevolence. As secondhand clothing becomes more marketable and profitable, the extremely wealthy have started to appropriate the process, and some are even finding monetary potential in the industry.

When the uber-wealthy adopt a practice designed to benefit the lower and middle classes, they make said practice less accessible to those for who the practice was created — those who truly need it. If you can afford to spend hours a day rummaging through bins of old clothes, you are able to snatch up the best items before many even know they were there.

Those who take these clothes — clothes they do not even need — and jack up the price to the point where it is no longer affordable for most are engaging in morally questionable practices that make it even more arduous for lower-class Americans to find ethically responsible, stylish clothes at affordable prices.

Rapacious corporations are mostly responsible for this pressing issue in America. This does not, however, diminish the moral responsibility of the consumer. Boycotting fast fashion, buying only what is essential and researching the companies one buys from are instrumental practices to galvanize equity in the fashion industry.

Clothing is expression and expression is art. When the freedom of expression is infringed upon by the same greed and ambition that serve to oppress those who are most vulnerable, there must be dire urgency among the people to enact restorative justice on the exploitative industry that is suppressing individualism.