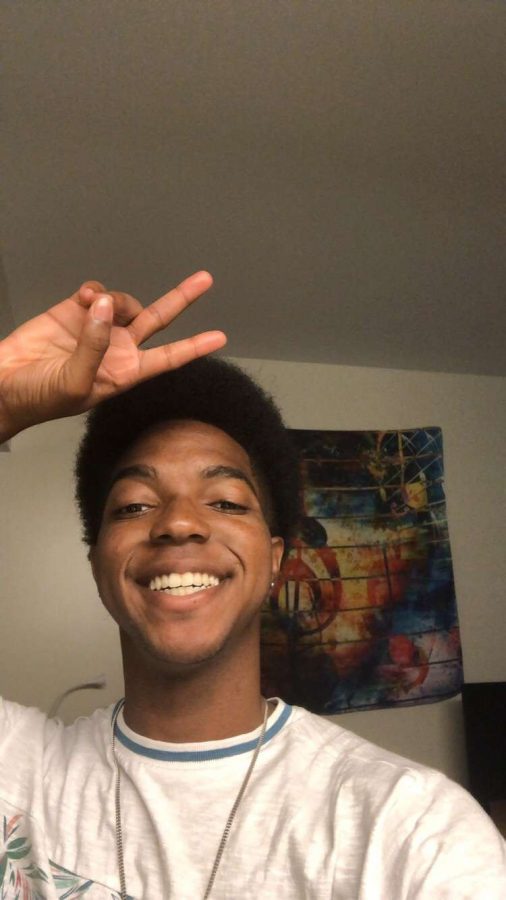 Austin Torain — widely recognized as Wake Forest’s “speaker kid” — is a sophomore from Roxboro, N.C. He intends to major in psychology and minor in neuroscience. He is a member of the Spirit of the Old Gold and Black, Wake Forest Marching Band and Momentum and works at the Waker Space. He is also a resident adviser in South. When I walked up to interview him, I heard Kendrick Lamar’s voice streaming out of his backpack before I saw Austin himself.

Has music always been a part of your life?

Yeah, my parents were super musically oriented when I was growing up. My dad was in the gospel choir at our church. My mom used to play clarinet, so she played for us sometimes. And then my sister got into music, so I thought, “oh, well now I have to get into music.” It was always kind of built into me and it’s just kind of always been around me. Now I’m in the marching band, and I play baritone. It’s basically like a trumpet but it’s fatter, so it’s a horn, a brass instrument. I also play a little bit of trombone.

I actually went to a boarding/residential high school. It was basically a college campus but really small — there were 500 to 600 of us. I started doing it then, just walking from class to class, playing music in the hallways — and it went over really well. I got a lot of positive comments, people were smiling, dancing, and some of my teachers would even let me play music during class when we were doing something monotonous. Since it went over really well, I thought, “you know what, why stop?” So I did it last year during COVID-19 — which was a weird time to be alive in general — but it went over pretty well. All the workers at the Pit and Benson really liked it. So I said, “I’ll just keep doing it.” This year, it’s definitely a different vibe. Especially with YikYak, it’s been interesting.

How do you feel about people mentioning you on the app?

I’m moderately okay with it. Most of the comments are just, “oh I spotted him” but some of them are super weird. I don’t know. Someone said something the other day about — I don’t even remember it — it was something really weird like them wishing they could hit me with a car or something. All I’m trying to do is walk around and get some smiles and some high fives, but people are out here making it kind of awkward. But, as I was telling somebody recently, I’m not super bothered by negative feedback. When people say things like “somebody get speaker kid some headphones,”  those kinds of comments just make me want to do it more. You know what? I’m just going to play it louder when I walk places, because who’s going to stop me? Nobody. I do it because I like seeing people smile and I think it’s a good time. I feel like a lot of us came to Wake Forest because we liked the community here. So I just want to make the community better.

I’ve never heard any repeats, how long are your playlists?

My Community Director asked about this because he asked me to make a playlist for move-in, and at that point, I already had a 10-hour long playlist. So I tweaked it a little bit and took out some not-so-clean songs. On my Spotify, I have 700 liked songs. So, most days, I’ll just circle through the songs that I am feeling in the mood to hear or that I think others would like. But I have 20-something playlists. I make a lot of playlists, it’s kind of like my therapy.

Over the summer, I got into an alternative-pop mood, or what you might call neo-soul. Music with a lot of trumpets — I’m really into the brass sound right now, so I’ve been listening to a lot of Kyle Thornton and the Company. I really like Brasstracks, too. I was listening to a lot of them, because something about this trumpet sound has been intriguing me lately. I also really like “Certified Lover Boy”, and “Donda” was pretty good too. I guess I’m more of a Drake fan, so I’m just not going to say a whole lot on that because I’m biased, but I really like “Certified Lover Boy.”

Is there anything you won’t play?

Not really. I don’t play a lot of country, but that’s just because I don’t know a lot of country. I didn’t grow up on it, so I don’t know what country songs are hip right now or what country songs are good. I do play some Luke Combs sometimes. I also really like K-pop. I feel like people hate on K-Pop, but I’m here for K-pop. I’m also here for EDM, like rave music. As a dancer, I like to jump around, I like to move. So, there’s not a whole lot that I won’t play.

Some songs I’m less comfortable playing just because I generally want adults not to absolutely hate me when I walk around. Depending on where I am I definitely tend to play what I think people are going to be excited to listen to. If I’m in the pit, I’m not really going to play a lot, because the pit workers probably wouldn’t get down to that. Usually, when I’m in the pit I play a lot of Michael Jackson, a lot of 80s funk and a lot of soul because the workers seem to respond really well to that. And then, when I’m walking around campus, I often play a lot of rap music because a lot of people like rap, and I like rap a lot.

Do you want to plug anything?

I want to plug my Instagram, @speakerkidwfu. Follow me on Instagram, I’m trying to make it big. I also have a gig of sorts this Friday in the Pit from 11:30 a.m. to about 2:30 p.m. I’m just going to be setting up at a table, just like a DJ, playing some music. I guess someone finally said, “you know what, this kid isn’t going to stop, so give him a gig. Give him a [expletive] gig.”

Editor’s Note: This interview was edited for clarity and brevity.