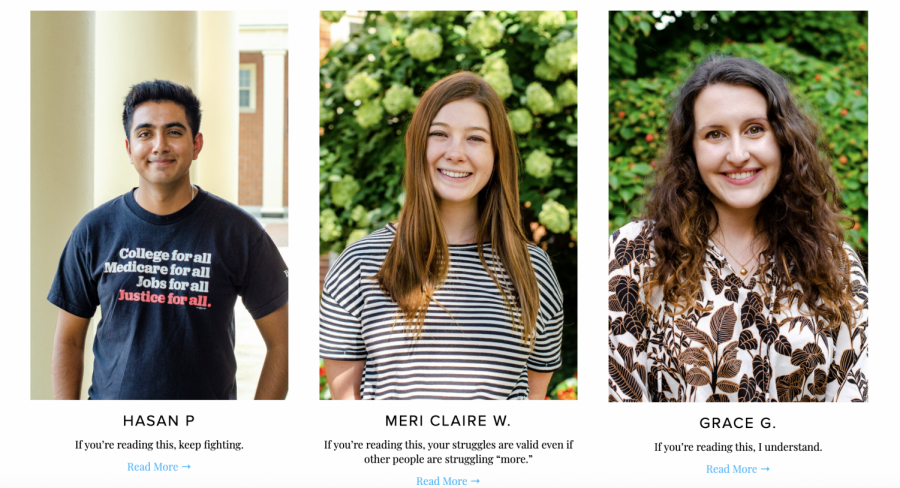 The If You’re Reading This website features letters from those who have struggled with mental health issues. There are currently three letters posted on the site.

If You’re Reading This, a letter writing program meant to connect individuals struggling with mental health issues, has made its way to Wake Forest as of Sept. 1.

The program involves the publication of letters penned by students who have dealt with mental health issues on the If You’re Reading This website for the benefit of students dealing with similar problems. Each letter begins with the phrase “If you’re reading this,” and details the author’s experiences dealing with personal battles.

The organization began at the University of Virginia and has since reached many other college campuses. Sophomore Kendall Woodall spearheaded the process of bringing the program to Wake Forest, and noted how important it is for students to have an outlet to speak on their experiences and relate to others who might be going through a similar thing.

Woodall recalled her own struggles acclimating to college life as a freshman and discussed how important it is for students to understand they aren’t alone.

“It would have been nice to read letters written by students saying, ‘It’s tough, I know, but I got through it,” Woodall said. “That’s why I wanted to bring it to Wake Forest.”

One of the unique aspects of If You’re Reading This is that it’s run by college students, for college students. This peer-to-peer outreach system is very valuable, especially amidst the turmoil that has defined the first few weeks of the fall semester, per Woodall.

“I think that it’s an important thing to have a student-run mental health stepping stone,” Woodall said. “I think there’s been a lot of stress during the first couple of weeks given everything going on. It’s nice to have something that’s not specifically affiliated with the school.”

Any mental health assistance the If You’re Reading This project can provide would be regarded as a massive victory.

Woodall continued: “I hope that even if one person reads a letter that someone else wrote, and it makes them not do something dangerous, or it makes them want to help themselves or reach out to their friends to [get] help, I think it would have sort of served its purpose.”

Woodall has worked closely with senior Katie Fox to get the program started here at Wake Forest. Fox serves as the organization’s photographer, and is in charge of taking pictures of the authors who volunteer to write letters for the site. The program’s lack of author anonymity has had a profound impact on her.

“It’s been really cool for me to be able to meet the faces behind the stories and the letters,” Fox stated. “It’s just really encouraging to know that these are students just like us … they look so happy and smiling in their photos, but we’re all kind of going through similar things. We’re all going through tough times. The photos help make it more personal.”

Sophomore Hasan Pyarali is one of the authors who opted to share his story on the website. For him, writing a letter was all about encouraging those struggling to keep battling.

“I hope that if someone feels left out, [whether] they’re a part of a club, a school, a nation, a job, a workplace, whatever, that they keep the fight going,” Pyarali said. “Don’t give up.”