After a protest on Aug. 28, students and university officials are trying to maintain momentum for change 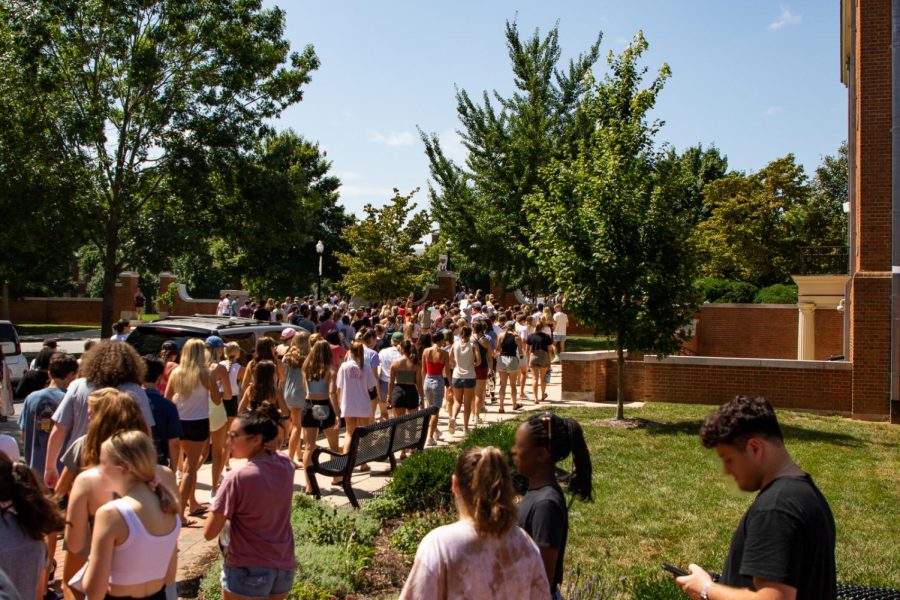 More than two weeks following the protest on Aug. 28, campus leaders are working to effect change in the way the university handles its culture of interpersonal violence.

On the morning of Aug. 28, a cry for action could be heard around the quad.

Today, less than 20 days later, a number of students worry that these cries for radical change have gone silent or been drowned out. According to campus leaders, however, that is not necessarily the case.

On Monday night, Conway and the rest of the Panhellenic Executive Board partnered with university leadership to visit all eight Panhellenic chapters and distribute resource cards and answer general questions. According to Conway, doing so was meant to serve as a check-in.

Unfortunately, some members across certain Panhellenic chapters felt hurt, off-put and triggered by the drop-ins.

“The reason behind today was to provide transparency regarding what is to come and what we, as a Panhellenic community, are working towards,” read an apology email sent from Conway to all Panhellenic community members. “However, I fear as if the conversations in some chapters were incredibly triggering and did not necessarily achieve their intended purpose. For that, we apologize to each of you and all of your members.”

The protest that unfolded on that Saturday morning in August surrounded the readmission of Wake Forest students who had been publicly accused of sexual assault with a focus on the ways in which rape culture is perpetuated around campus. A student-written petition was also made in conjunction with the protest.

The first communication from the administration to the student body related to the protests came in the form of a WFUNews email from Vice President of Campus Life Penny Rue.

“Recent social media posts, a student-organized demonstration on campus and an online petition claim that Wake Forest University has taken actions that undermine the safety and security of our community,” the email read.

The email continues, expressing that administrators support students and their efforts to mobilize and speak about important issues. It also assured students that administrators were in the process of scheduling meetings to speak with concerned community members and informed readers that further communications were to follow.

The email was received with mixed emotions.

“It didn’t feel like it added anything new to the conversations,” sophomore Sarah Cadena said. “It felt vague [and it was unclear what concrete] actions the University would take. I still appreciated the tone of broad approval it had.”

A few days later, on Aug. 31, President Wente’s response to the protest was sent to the student body — also via email. This message included concrete steps the university was undertaking, including:

Cadena expressed her appreciation for the supportive tone of President Wente’s email and explained the importance of carrying through on these actions.

“How this unfolds will really show the type of leader she will be for our school,” Cadena said. “She has that power.”

As August rolled into September, the attention surrounding the protest and the implications it held regarding the broad issue of sexual assault on campus were once again boosted — this time, by a faculty-written petition.

“My reasoning for wanting to start the petition was talking with students about both the protest, as well as larger issues, and the ways in which the school has dealt with these issues in the past,” Dr. Mir Yarfitz, a member of the progressive faculty group Wake Forward and the main author of the petition said.

The petition called for “concrete suggestions for a comprehensive anti-racist sexual and interpersonal violence prevention strategy,” and stood firm that the best way to promote this change was through additional staffing in departments such as the Office of Wellbeing, Student Health, the SAFE Office and more.

Yarfitz received a response from Penny Rue and Vice President for Diversity and Inclusion José Villalba on Sept. 9.

“Your message highlights many of the short-term and long-term challenges of campus sexual and relationship violence,” the response read. “We have been charged by President Wente to work collaboratively with the university community and the administrators you mentioned in the petition, as well as the offices they represent, and other resources in our areas.”

According to Yarfitz, Dr. Wente has not yet directly responded to the faculty petition. However, he believes that she and her team referenced their suggestions in her latest newsletter.

“I also wrote a follow-up email and explicitly invited Penny Rue [and other administrators] to a meeting and she responded quite quickly and positively,” Yarfitz said. “But that meeting is not on the calendar yet.”

One of the most notable proposals in the Wake Forward faculty petition was the request for the creation of education programming “in conjunction with Greek Life and other cam sectors.”

“This is much larger than one or two cases,” Conway said. “The things that people want to know [including individual case details] — legally, [the university can’t release this information]. What is needed is a culture change within Wake Forest.”

As time continues to pass and October draws near, Cadena, Dalton, Conway and other students are hopeful that concrete change is on the horizon — even if that change takes time.

“We need to be sure that the legacy of this conversation continues,” Dalton said.