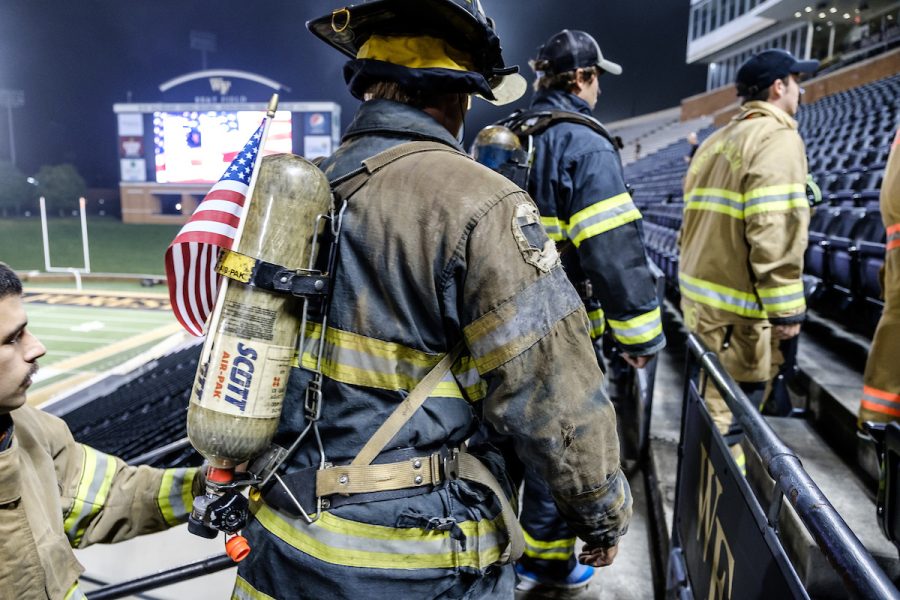 At Truist Field while the sky was still dark, hundreds of participants from both Wake Forest and Winston-Salem State University began to climb 2,997 steps — the number of lives lost in the terrorist attacks 20 years ago on Sept. 11, 2001.

According to Lt. Col. Larry Rubal, who teaches military science at both universities, the turnout at this year’s climb was higher than it had ever been.

“To see Directors Currie and Thomas on that field with entire athletic teams, students, faculty, cheerleaders, in concert with local first responders, running groups, veterans, and citizens at 6 a.m. on a Saturday was moving,” Rubal said. “That event was not only an incredible remembrance of those lost but an incredible display of the strength and compassion of our Winston-Salem community.”

As participants ran, the names of those who were killed were displayed on the scoreboard, and many patriotic songs played in the background.

“The song that I enjoyed the most was ‘Where Were You When the World Stopped Turning’ by Alan Jackson,” said senior Sam Hanson, an ROTC cadet who instructed the climbers Saturday morning. “Hearing it at a 9/11 remembrance event sent shivers up my spine. The thing I like most about this song is that it talks not only about those who were in New York, but also those who

were all around the country, and what they might have been thinking or feeling as they watched those towers collapse.”

Hanson said that being able to help coordinate the event made him proud, especially during these politically polarized times.

“Regardless of our political leanings, the changing political climate, and our differing views, we can still run up those stairs to remember those who lost their lives 20 years ago,” Hanson said. “We as Americans should never forget what happened that day, and it was my honor to aid in that remembrance.”

For Hanson, waking up early to climb steps was not an issue.

“I think it’s a small price to pay to remember those who lost their lives,” he said. “As an ROTC cadet, I am used to getting up at all hours of the morning, but I was more than happy to wake up early to participate in this event, and I was glad to see that hundreds of others shared that sentiment.”

“As we think about the first responders, I am always deeply challenged by the thought of looking at the towers as they fell, seeing people jumping to avoid the collapse and the flames, and choosing to run in with the goal of saving others and the knowledge that you would probably never make it back out,” Swartzberg said.

She continued: “My representation of our community feels minuscule when you think about that level of service to your community and there was nowhere else I’d rather have been at 6 a.m. on this past Saturday, and I was thankful to the No Fear Battalion for creating this very intentional space.”

Rubal was delighted that the event was able to be held on Saturday despite both universities hosting football games later that afternoon.

“We were a little hesitant to conduct the climb on Saturday at 6 a.m. before football games for each university,” Rubal said. “We asked to keep it on the Sept. 11 given the significance of remembering the actual day 20 years later, and both universities supported that knowing it would [be over] just hours before two football games, one at Truist Field.”

Rubal believes that as the years press on, the climb becomes more significant.

“Our responsibility shifts to share that memory with a younger generation who weren’t there to see it for themselves,“ he said. “Our stories become that much more important to keep the promise we made 20 years ago, that we would never forget.”