After a tough losing streak, the Demon Deacons take down one of their strongest opponents 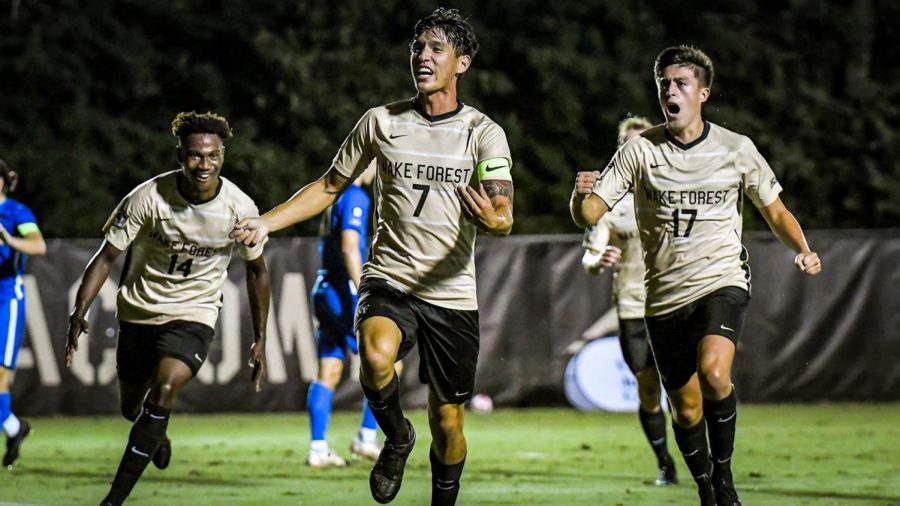 Holcomb started off the scoring on Friday with a goal in the 16th minute. Goals by Tubbs and Oliver solidified the win.

As the final whistle blew, the crowd at Spry roared in appreciation, substitutes sprinted across the field and smoke descended on fans gathered on the hill. Wake Forest had just upset No. 5 Pittsburgh, 3-1.

Senior Kyle Holcomb, sophomore Garrison Tubbs and sophomore Chase Oliver all scored in a potentially season-changing victory over last year’s College Cup participants. The Panthers are coached by Jay Vidovich, a former Wake Forest coach who won the 2007 NCAA championship during his tenure.

Despite Pitt’s recent success, Wake Forest has historically dominated the Panthers. They had not lost in five previous matchups, and entered Friday having never conceded a goal to Pitt. Wake last played Pitt in 2017, but hosted the Panthers in a preseason match before last season as well.

The two teams entered the match on differing trajectories. Pitt was recovering from two upset losses against West Virginia and Akron which were followed by a dominant 4-0 victory over then No. 4 North Carolina.

In opposition, Wake Forest dropped out of the United Soccer Coaches top 25 for the first time since the beginning of Bobby Muuss’s managerial tenure after a 3-0 loss to Louisville, continuing an extremely difficult start to the season for a young and inexperienced Wake Forest team.

On Friday, senior Holland Rula returned to the starting lineup, positioned at left back which allowed Jahlane Forbes to start on the left wing. Prince Amponsah was suspended following his red card against Louisville, so Nico Benalcazar and Tubbs filled in. Redshirt sophomore Cole McNally was scheduled to start, but was a late scratch. The goalkeeper continues to recover from an injury suffered against Cornell.

From the outset, the match did little to resemble a normal Wake Forest game, with Pitt controlling possession. The Deacs sat back, a significantly different approach than the usual possession dominant style, absorbing Pitt’s pressure and counterattacking.

Yet, the Deacs’ strategy paid off early. Stepping forward, junior midfielder Takuma Suzuki forced a turnover and played a pass into the path of Omar Hernandez. Hernandez’s shot was spilled by Pitt’s grad-student goalkeeper Nico Campuzano, with the rebound falling to the feet of Holcomb, who collected himself and powered the ball into the roof of the net to give the Deacs an early lead.

Wake’s strategy continued to pay off, with Holcomb finding acres of space on the counterattack. Heroic defensive contributions and stellar goalkeeping from sophomore Trace Alphin aided the Deacs’ cause. Pitt’s attacks were continually stifled, and they often resorted to long-range efforts that failed to truly test Alphin.

Wake extended their lead in the 69th minute, as sophomore Oliver fired in a shot that took a sizeable deflection off the outstretched leg of a Pitt defender and careened into the roof of the Pitt net. Oliver’s second goal of the season iced the match, cementing a significant result that could mark a turnaround point following two early regular-season losses.

Veljko Petkovic pulled a goal back for Pitt, their first-ever against Wake Forest, with a scorching strike from outside the box. After that goal was too little too late, even as Wake went down to 10 men following Leo Guarino’s second yellow card.

The win was a vital moment that Muuss and his team hope will spark renewed confidence ahead of a season that will only grow tougher. Wake Forest continues its ACC slate at NC State on Sept. 24, before returning to Spry against nonconference opponent Liberty on Sept. 28.