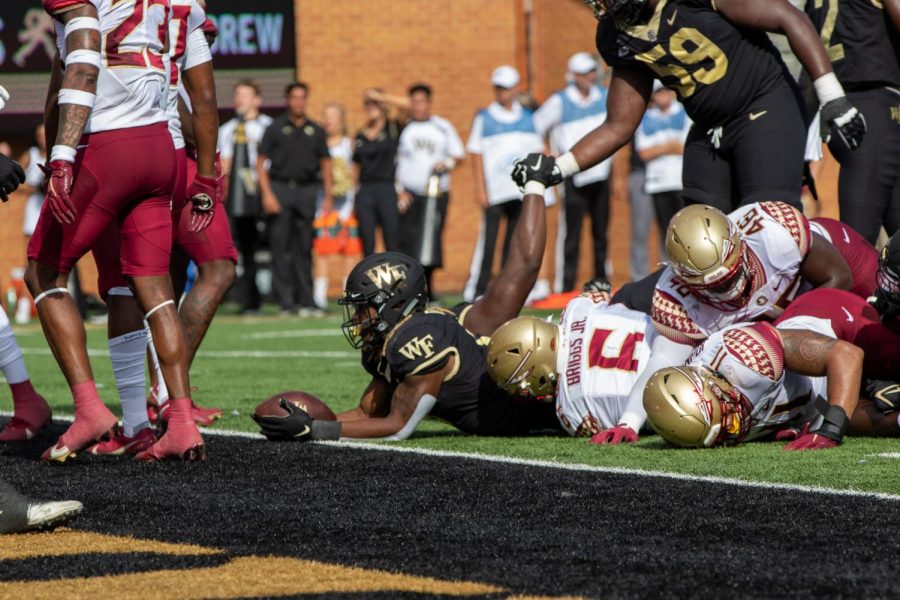 Redshirt junior running back Christian Beal-Smith (98 rush yards, one TD)dives into the endzone for Wake Forest's second touchdown of the game.

On Saturday, Truist Field was filled to the brim with a boisterous Wake Forest crowd and a Florida State traveling party that took up a third of the stands. In front of that crowd of nearly 30,000 — the largest of the season so far — the Demon Deacons played their best game of their campaign thus far, defeating the Seminoles 35-14.

In the week leading up to the game, much was said about Florida State and their competitiveness. Coming off an overtime loss to No. 8 Notre Dame, the Seminoles lost on a game-ending touchdown pass against FCS squad Jacksonville State before traveling to Truist on Saturday.

Because of those two vastly different results, the narratives surrounding Florida State were different all across the board. Some expected Wake Forest to blow out the Seminoles, while others saw the matchup as a trap game. All of the experts on College GameDay picked Florida State to win.

Throughout the week, Wake Forest Head Coach Dave Clawson remained steadfast in his team’s preparation. Clawson was quick to recognize that Florida State was not as poor of a team as they were made out to be.

“It’s a matter of time until these guys get it right,” Clawson said. “I know their results right now aren’t what they want them to be. But they took a top-10 team to overtime and lost to Jacksonville State on a fluke play. They are two plays away from being 2-0, and probably, nationally ranked. Florida State is Florida State.”

Clawson was also quick to mention that in conference, the Seminoles and Wake Forest stood as equals.

On Wake Forest’s first drive, the Seminoles’ defense came out firing. After one first down off a run from redshirt sophomore running back Christian Beal-Smith, the Demon Deacon offense faltered.

On second down, redshirt sophomore quarterback Sam Hartman tried to fit a pass through a tight window to redshirt senior tight end Brandon Chapman. The pass made it through, but bounced off Chapman’s helmet and into the hands of the Seminoles defender Sidney Williams at the 50-yard line.

The turnover was the beginning of a slow start for Wake Forest in a game where mistakes needed to be minimized. After the game, Hartman highlighted the importance of playing through mistakes.

“We did the job, staying mentally tough and bouncing back,” he said. “That was the whole message this week. Not everything’s going to go our way, and [Florida State] is going to make plays. We have to bounce back.”

Following the interception, the Seminole offense was led out by quarterback McKenzie Milton, a UCF transfer who was injured two years ago and was told at the time he would never play football again.

In the buildup to the game, Wake Forest struggled to prepare for the Florida State offense, as the team regularly played two quarterbacks: Milton and Jordan Travis.

“[Milton’s] skill set is his smarts — his anticipation of throws and his ability to read coverages,” Clawson said during the week leading up to the game. “He’s a good football player, he’s won a lot of games. There’s nothing you’re gonna throw at him that he hasn’t seen. [Both quarterbacks are] very talented. The challenge is preparing for both of them.”

After the Wake Forest turnover, the defense responded, only giving Milton two snaps on the field. On the second snap of the Seminole’s opening drive, Joshua Corbin, their star running back, rushed through the middle of the defensive line. When he engaged with the front four, the ball popped out, and Demon Deacon freshman cornerback Caelin Carson fell on it.

From there, Hartman stepped on the gas. Following two Beal-Smith rushes to start the drive, the quarterback took to the air. On the third play of the drive, redshirt sophomore wide receiver A.T. Perry cut to the inside of his defender and flew down the right sideline. Hartman’s pass caught Perry right in stride, leading him into the end zone for the first score of the game.

Perry led the team in receiving, catching seven passes for 155 yards and the touchdown. After the game, he expressed that preparation was the difference in his separation from defenders throughout the game.

“Watching film on [the Seminoles defense], I really felt confident in the plays that were being called,” he said. “I prepare myself by watching as much [game film] as possible and taking care of my body as well. I come ready to play.”

Following a Florida State three-and-out, Wake Forest once again marched down the field. In between runs by freshman running back Justice Ellison, Hartman once again found Perry for 15 yards to get into Seminole territory.

On third-and-eight, Hartman completed a pass to redshirt junior receiver Jaquarii Roberson at the 18-yard line. After the catch, Roberson fought for extra yards, but in doing so, allowed for a convoy of Florida State defenders to surround the receiver and rip the ball free. The play saved the Seminoles from another dangerous-looking Wake Forest drive.

Once again, after a turnover from the offense, the Demon Deacon defense stood tall, forcing the Florida State offense off the field in a three-and-out. In the game, the Seminoles converted on only one of six on third-downs. Redshirt defensive lineman Miles Fox knew this was the game to step up.

“[Stopping Florida State on third downs] was our mentality,” Fox said. “We had to play better. Everyone stepped up to the plate today and played their butts off.”

Following the third-down stop, the Wake Forest offense took to the ground. On the nine-play touchdown drive that ensued, eight of the plays were runs, including a 24-yard scamper by Hartman that brought the Demon Deacons to the doorstep of the Seminole red zone. Following a rush to the goal line from redshirt sophomore back Christian Turner, Beal-Smith cashed in to give Wake Forest a 14-point lead.

With their second quarterback Jordan Travis under center, the Florida State offense finally began to click. After a 10-yard pass to move the Seminoles into Wake Forest territory, running back Treshaun Ward darted through the Demon Deacon front seven for a gain of 22 yards. On the next play, Travis found Ward in the flat. From there, the back made a cut to the inside and scampered from eight yards out into the end zone, cutting the deficit to seven.

On Wake Forest’s next drive, Hartman utilized the Deacons’ depth at wide receiver, completing passes to four different receivers. During the offense’s 75-yard march, he found redshirt freshman Taylor Morin twice for 13 yards, freshman Ke’Shawn Williams once for 12 yards and Perry once on third down for a 20-yard gain. Hartman found the fourth receiver of the drive, redshirt senior Donald Stewart, on an 11-yard touchdown pass.

With under six minutes remaining in the first half, on third down, Milton fired to the right side of the field, searching for Corbin in double coverage. Junior cornerback Nasir Greer stepped in front of the pass for the interception. From there, the Wake Forest offense rushed the ball into field goal range and converted, extending their lead to 24-7.

That scoreline only lasted for one play. With Travis back under center, receiver Ontaria Wilson capitalized on blown coverage with a 65-yard touchdown reception.

With three minutes left, Hartman and the Wake Forest offense orchestrated an effective end-of-the-half drive. After what looked to be a lost series, a 44-yard reception to Perry spurred the Demon Deacons forward, putting them in position for a 22-yard field goal conversion from Nick Sciba. The kick gave Wake Forest a 27-14 lead at the half.

On their first drive of the second half, the Wake Forest offense got right back to business. With the duo of Beal-Smith and Ellison running the ball, the Demon Deacons moved down the field with interspersed passes from Hartman to Morin. On third down at the goal line, Clawson called Ellison’s number. With a big push from the offensive line, the back rumbled into the end zone to extend the Wake Forest lead to three touchdowns.

Following the score, the Demon Deacons relied on strong defense — including three forced turnovers — and their run game to bleed out the clock and secure the win. After the game, Clawson emphasized the magnitude of the win.

“It’s a good day for Wake Forest University and Wake Forest football,” he said. “I’m just really proud of our players. We knew the level of competition was going to step up. We knew we were going to have to play a four quarter game. It was a really good team effort, a complete effort. We’re gonna need more of this as we move forward to a very good Virginia team next week.”

On Friday night, Wake Forest will travel to Charlotteville, Va. for their first away game of the season against the University of Virginia.