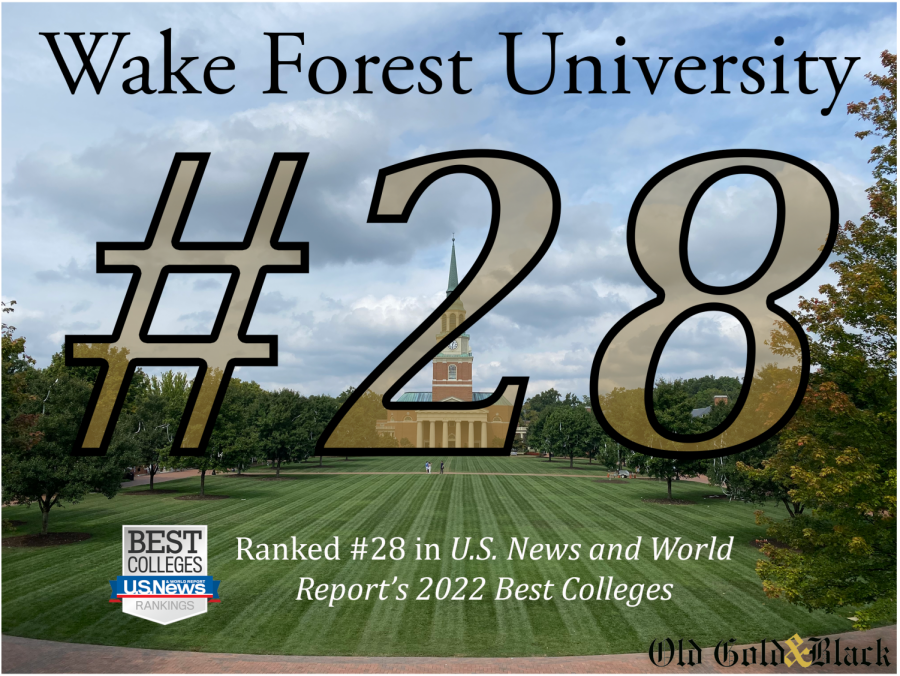 These days, the phrase “admissions is a numbers game” can be interpreted in more than one way.

On Sept. 13, U.S. News & World Report released its list of 2022 U.S. News Best National Universities. This year, 1,466 bachelor’s degree-granting schools and national universities were evaluated, and only 392 made the list. Wake Forest University was one of them, sitting at No. 28.

This difference in weight is meant to level the playing field between schools. Even still, not all students see this as an effective way to ensure equity among institutions.

What do these rankings mean for admissions and current students? Are the slots on the ranking list arbitrary numbers, or do prospective students care about rankings?

So, perhaps more importantly: Will the upcoming Wake Forest admissions cycle be impacted by the school’s place in the national rankings?

But there is one agreement that Maguire, Birnbaum and Galante can agree on — specific number rankings do not matter just so long as the school is near the top.

Birnbaum does not even mention Wake Forest’s ranking on her tours.

“I personally don’t talk about the rankings because I think, if you’re touring Wake Forest, you already know what they are,” she said. “Typically, people who are looking at Wake Forest are looking at top schools.”

Birnbaum then compared her own college search to the application journey for prospective students today.

“I would love to say that I didn’t care about rankings when I was looking for colleges,” Birnbaum said, laughing. “I didn’t care about the exact ranking — if it was top-30 or a little below — but I wanted to go to a school where I knew there would be good academics and I would be surrounded by students who also cared about that.”

Freshman Riley Shanaghan recalls not individually caring about Wake Forest’s national ranking. For her, it was more important to go to a school that offered her a competitive scholarship than it was to go to an elite school.

“It all came down to money in the end,” Shanaghan said. “I feel like Wake Forest is ranked pretty high but not high enough for people to consider it an ‘elite school’. Not a lot of people from the other side of the country really know about Wake Forest.”

So, perhaps national ranking lists do not have the power that high school counselors think they do. Or, as Galante phrased it, “perhaps a number truly is only a number.”