After losing their first two games, the Demon Deacons bounced back with an ACC win 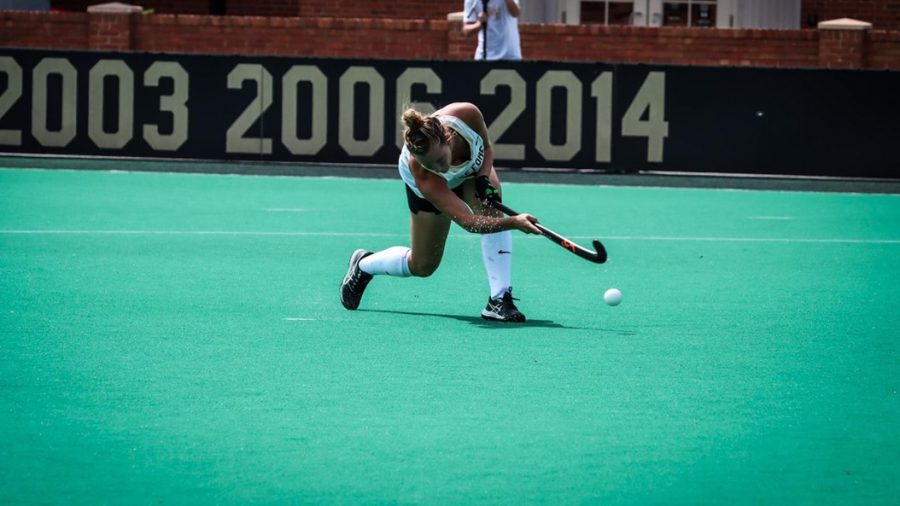 Field hockey had a perfect weekend, finishing with a 3-2 win over UMass.

Coming off a shortened 2020-2021 season that left much to be desired, the Wake Forest field hockey team headed into the fall season on a mission. The Lady Deacon squad has strung together a losing record just once since 2012, and they were looking to get back on track in 2021. Their competition, though, is in no regards a cake walk — the ACC consistently boasts the highest-ranked conference for field hockey — with the reigning national champion, North Carolina Tar Heels, leading the pack.

However, with double-digit wins and a winning record in nine of the last 11 sevens, Wake Forest should not be taken lightly. They were given a No.11 ranking by NCAA RPI and have since opened the season with mixed results.

Wake Forest opened the season in the ACC/Big Ten Challenge against one of the premier opponents in the country. Game one positioned the Demon Deacons against No. 3 Iowa, and they lived up to their ranking early on. The Hawkeyes scored three first-period goals before the Demon Deacons marched back. Freshman Brooke McCusker, awarded “Most Promising” player in the Field Hockey British Columbia High School Academy in 2019, found the net in the second frame on a penalty corner. Iowa added to their lead in the fourth, but Wake Forest junior all-American Meike Lanckohr, a native of the Netherlands, recorded back-to-back goals in a span of just two minutes. Elisha Evans assisted on all three Demon Deacon goals, giving her a career-high. The Hawkeyes ended the Wake Forest rally with a goal with three minutes left on the clock.

The Demon Deacons fought a defensive battle and nearly upset the second-best team in the country, allowing the Wolverines just four shots on goal. It was the lowest shot total allowed by Wake Forest since the 2020 ACC Championships in the first week of November.

“I am incredibly proud of the squad, said Wake Forest head coach Jennifer Averill. “Despite the loss, there were many victories in today’s team performance.”

Wake Forest earned its first win of the season against Appalachian State in its home opener in an all-around dominant performance. Sophomore forward Hannah Maxwell scored a career-high three goals, while the defense allowed just three shots on target all game. Evans and senior Abby Carpenter added goals in the third and fourth periods to put the game away for good. The Demon Deacons had 23 shots in the game, 16 of which were on target.

Despite outshooting the Buckeyes 21-8, the Demon Deacons could not hold on to an early lead. Lanckohr gave Wake Forest the lead in the first period off a penalty corner before Ohio State scored a pair of goals in the second and third periods. Evans picked up an assist, her team-leading fourth of the season. Maxwell was credited with her first of the season.

In the highest-scoring Wake Forest affair since Nov. 1, 2020, against Boston College, six different Wake Forest players scored. Five players — freshman Ashley Arnold, senior Olivia Corthals, junior Maggie Dickman, junior Nat Friedman and freshman Ashley Hart — notched their first goals of the season. Evans scored her second goal of the season in the first period on a penalty corner — the Demon Deacons have scored nine goals on penalty corners this season. Wake Forest outshot James Madison — who scored once in the second period and once in the fourth period — 19 to 7.

For the second time in as many games, the Demon Deacons raced out to an early 2-0 lead. Lanckohr found the back of the net for the Deacons both times before the Blue Devils responded at the beginning of the second period. McCusker answered late in the same frame with her second goal to eliminate any momentum left for Duke. Sophomore Tori Glaister made three saves in the win, a season-high.

The third-straight win for Wake Forest came in nail-biting fashion against another ranked opponent. Wake Forest scored a trio of goals — one in each period — before UMass got on the board. Lanckohr scored her sixth goal of the season, and third in the last two games, on a short corner. Evans followed it up with her third goal of the season, and Arnold scored her second goal of the year on a penalty shot. Sophomore Grace Delmotte picked up her fifth assist on the season and Glaister matched her season-high with four saves.

Wake Forest has outshot their opponents 103-38 over the last five games and carries momentum into a series of ACC matchups. The Demon Deacons take on the Cavaliers of Virginia on Sept. 24 before heading on the road for three matchups — against Louisville, Miami and Syracuse — to begin October. Wake Forest will then head home to take on division-rival North Carolina.