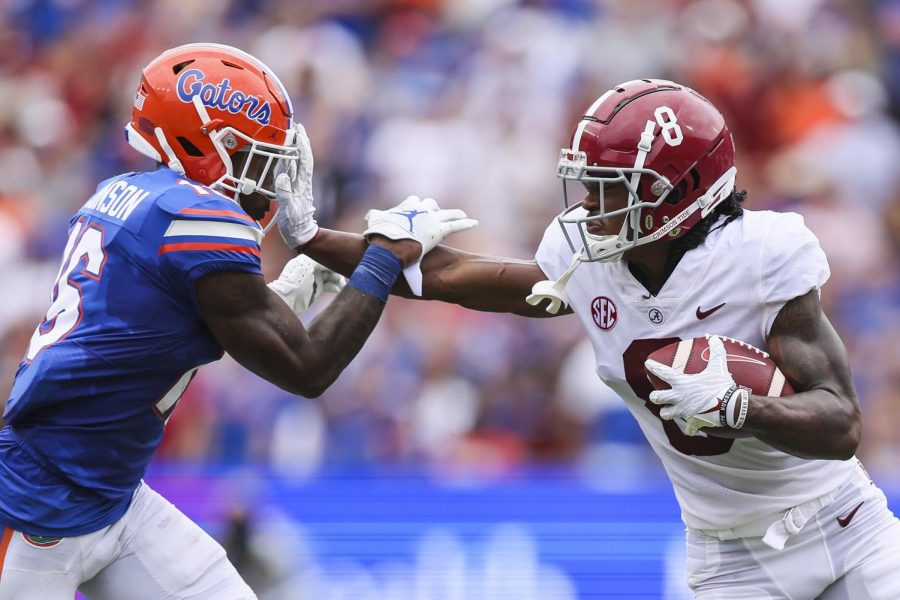 After a chaotic first two weeks of the college football season, Week 3 was relatively quiet. No teams in the top 10 lost, and only one Power 5 Conference team lost to an FCS opponent (Arizona to Northern Arizona), but that’s certainly not to say that it wasn’t an eventful Saturday. Three matchups between ranked teams headlined the day, and there were plenty of great games with impactful results throughout the rest of the NCAA.

Perhaps the day’s most exciting game featured No. 1 Alabama making the trip to The Swamp to play No. 11 Florida. The Crimson Tide continued their dominant play from their first two games early, jumping out to a 21-3 lead, but gradually let Florida back into the game.

The Gators made it a one-score game in the fourth quarter, but failed on a two point conversion that would have tied the game with 3:09 to play. The final score: 31-29. Alabama surrendered 258 yards on the ground to the Florida rushing attack, looking like a potentially beatable team for perhaps the first time all year.

No. 22 Auburn traveled to No. 10 Penn State for their annual whiteout game, during which the whole stadium wears white — creating one of college football’s most electric atmospheres. That atmosphere worked to Penn State’s advantage on Saturday, as they rode a strong performance by quarterback Sean Clifford (28/32 passing, 280 yards, 2 touchdowns), and defensive stops on two Auburn drives in the last three minutes of the game to secure a 28-20 win. Auburn got a great game out of star running back Tank Bigsby, but still weren’t able to generate enough big plays in the passing game to keep up with the Nittany Lions.

Saturday’s third-ranked matchup saw No. 19 Arizona State playing at No. 23 BYU. BYU emerged victorious, but it’s probably more apt to say that Arizona State lost than to say the Cougars won. ASU turned the ball over four times and had 16 penalties for 121 total yards; BYU took advantage of those miscues just enough to come out with a 27-17 victory. The Cougars, though, threw two interceptions of their own and were outgained 426 yards to 361.

Outside of this week’s big-ticket matchups, No. 4 Oregon, No. 5 Iowa, No. 7 Texas A&M, No. 14 Iowa State, No. 17 Ole Miss, No. 20 Arkansas and No. 25 Michigan all took care of non-conference opponents in extremely convincing fashion.

Texas A&M’s win was a nice bounce back from their struggles against Colorado. Ole Miss, quarterback Matt Corrall continued to excel, this time with a seven-total-touchdown performance.

Several other elite teams were able to come out of non-conference games with a win, but not quite as convincingly. No. 9 Ohio State defeated Tulsa 41-20 behind a dominant performance by running back Treveyon Henderson (277 rushing yards, three touchdowns). Still, they took much longer to put their opponent away than they would have liked, holding only a seven-point lead early in the fourth quarter.

No. 3 Oklahoma also struggled to pull away from Nebraska, but got an excellent game from their defense — they held Nebraska to 95 yards rushing and had 10 tackles for loss, five sacks, and a gravity-defying, highlight-reel interception by defensive back D.J. Graham.

A few top squads also opened up conference play, to varying results. No. 2 Georgia kicked off this portion of their schedule with a 40-13 rout of South Carolina, while No. 6 Clemson continued to struggle on offense against Georgia Tech. The Tigers were able to ride their dominant defense to a 14-6 win, but their offensive ineptitude leaves them looking vulnerable as they chase a seventh consecutive ACC title. No. 21 UNC also kicked off conference play against Virginia, exploding in the second half on their way to a 59-39 win.

Despite this relative stability from the top teams, Saturday wasn’t without its upsets. No. 13 UCLA lost to Fresno State on a touchdown pass from Jake Haener (the nation’s new leader in passing yards) to Jalen Cropper with 14 seconds remaining. No. 24 Miami lost 38-17 to an ascending Michigan State team, surrendering 189 rushing yards and a touchdown to former Wake Forest running back Kenneth Walker. No. 15 Virginia Tech wasn’t able to escape Morgantown, W. Va., with a win. WVU held on to a big 24-7 halftime lead en route to their 27-21 victory.

Other noteworthy results included No. 8 Cincinnati using a big second half momentum shift to defeat Indiana 38-24. The game was the big first road test for a talented Cincinnati squad and a disappointment for an Indiana team that started the season with high expectations but now sits at 1-2.

Additionally, USC was able to come back from an early 14-0 deficit to defeat Washington State 45-14 in their first game after firing former head coach Clay Helton.