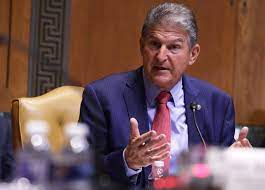 You befuddle me. You anger me. You, at times, are the greatest example of what I despise most about the Senate. However, at the same time, I respect you. I am grateful that you are where you are. Many people point to the Georgia runoffs as the reason Democrats have control of the Senate, but I point to you.

It is because of my very messy view of you, and the distinct position of power that you hold, that I decided to write you a letter outlining how I believe you should use your power in negotiating the reconciliation bill.

As you know, the recent election of Joe Biden was overwhelming. His victory over Donald Trump was a landmark occasion, with a Democrat winning Georgia for the first time since 1992, and Biden garnering the most votes for any presidential candidate in American history. His mandate was clear: the American people, overwhelmingly, wanted more progressive action on the main issues that plague the country. Issues such as the climate crisis, rising inequality and the COVID-19 pandemic.

Despite this popular mandate, you have made it your goal to reign back the Biden administration, often publicly. You go on Sunday news programs, claiming to be this great defender of the Senate and the moderate who will calm down the progressives. You write op-eds in the Wall Street Journal and Washington Post, distancing yourself from other Senate Democrats and further sowing divisions. The stances you are taking, and the public manner in which you voice them, are costing the country. This fact is made all too clear with the current negotiations over the reconciliation bill.

In your recent Wall Street Journal op-ed, you claim that the overall price of the bill is simply too high and that so much government spending is fiscally irresponsible because it “will create a disastrous future for the next generation of Americans.” I could not disagree more.

What will cause a disastrous future for my generation is a failure to act, Senator. Do not use the premise of the “next generation” as an excuse to cut this bill, our last chance at making any sort of dent in the climate crisis.

Further, I hope you are aware that the $3.5 trillion is set to be spent over the course of 10 years. It is not as if the money will be injected into the country the next day.

I was very distressed to read that one of the policies outlined in the reconciliation bill that you “have concerns about,” involves the provisions relating to the climate crisis. This did not surprise me, however, once I learned where your concern stemmed from: you are a direct beneficiary of the fossil fuel industry.

According to the New York Times, West Virginia is second in coal production and seventh in natural gas production in the country. In the current election cycle, you received more campaign donations from the oil, coal and gas industries than any other senator. You also directly profit from these industries, as you own what is valued at between $1 million and $5 million worth of stock in Enersystems Inc., a coal brokerage firm that you founded in 1988.

It is no wonder, then, that you are concerned. Biden’s proposed climate initiatives are tough on the fossil fuel industry. For example, the Clean Electricity Performance Program, a part of the reconciliation bill, would pay utilities to increase the amount of power they produce from zero-emissions sources and fine those that don’t. It’s a logical step in fighting the climate crisis, as it incentivizes those who try to do right by the planet, and punishes those who do not. And yet, this is one of the proposals that you most wish to change, lowering the percentage of clean energy that companies are required to produce every year.

I cannot stress enough how important it is that you do not change these provisions. The climate crisis is here, and it will only get worse. The occurrence and magnitude of wildfires, hurricanes, and other weather-related disasters is projected to further increase in coming years. All of these disasters will cost federal and state governments billions of dollars, dollars that have and will continue to dwarf the costs that fossil fuel emitters and the federal government will have to pay under the provisions outlined by the reconciliation bill.

Senator, this is about more than just you and your bottom line. This is about the future of the planet and the future of American leadership around the world. The science on the climate crisis is overwhelming, and so is the public’s desire to act on it.