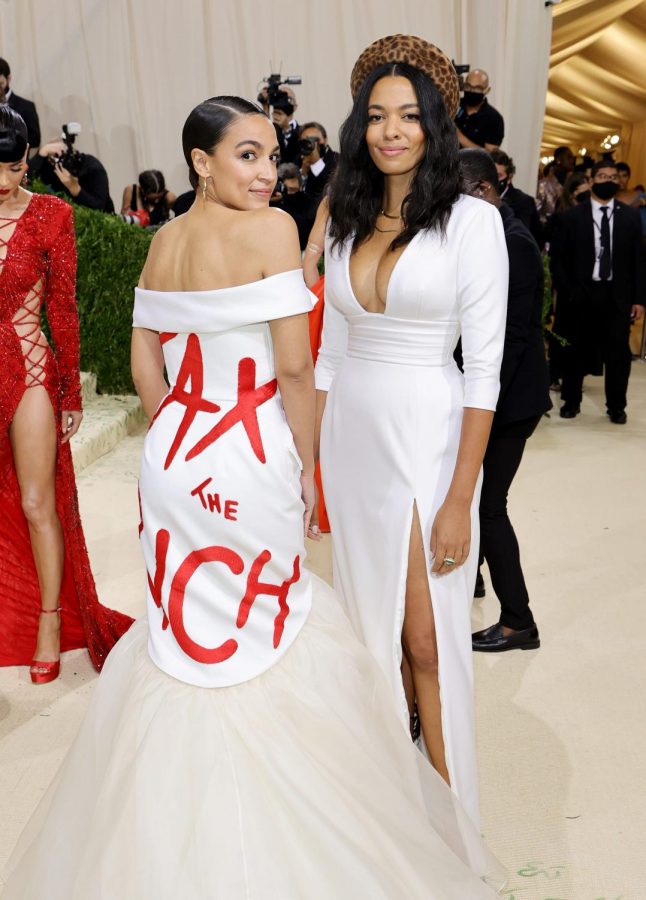 The Met Gala is a pretty big deal.

In 2020, the event raised over $15 million for the Costume Institute of the Metropolitan Museum of Art. Each year, people across the world tune in to see what the world’s most revolutionary designers are creating. More than anything, the event is an opportunity to make a statement.

This year’s theme, “In America: A Lexicon of Fashion” was intended to highlight up-and-coming American artists and make a case for American relevancy in the fashion industry as a whole. Following this theme, the event was hosted by Timothée Chalamet, Naomi Osaka, Amanda Gorman and Billie Eilish — some of the most impressive young icons that America has to offer.

Although the Met Gala is essentially a fashion show, much of the attention regarding the show is directed toward the messages the celebrities are trying to convey rather than the designers or the costumes they put together. Many of these messages are political, and this year’s Gala did not shy away from that tradition.

Representative Carolyn Maloney wore an elaborate, colorful gown that read “Equal Rights For Women”, Cara Delevigne, a model and actress, wore a vest with “PEG THE PATRIARCHY” written in red ink and Representative Alexandria Ocasio-Cortez wore a white dress with the message “Tax the Rich” emblazoned in bright red across the back.

As always, the outfits shown off on the red carpet were both praised and criticized, but this year, the frustration was undoubtedly much more serious and concentrated. It is simply too difficult to ignore the inherently performative nature of some of the political statements made. At an event where attendance sets you back $35,000, is it even possible for calls for economic reform to come across as genuine?

Representative Ocasio-Cortez — who does not come from privilege, and who worked as a bartender up until her election to New York’s 14th congressional district seat in 2019 is serious about tackling economic inequality in the U.S., making her choice of attire all the more surprising. In an interview regarding her attention-grabbing dress, AOC defended her outfit, saying, “Oftentimes, this conversation is happening [only] with working and middle-class people. I think it’s time we bring all classes into the conversation of having a fairer country.”

But what conversations are actually taking place? Unfortunately, the majority of attention is being directed towards AOC, not her message. Even if people were talking about taxing the rich, AOC did not bring any new or relevant information to the discussion. Taxing the rich is a proposition supported by Americans on both sides of the political aisle, and awareness of the issue has never been the barring factor for reform.

The most frustrating aspect of the situation is the fact that, not only did progressives fail to make any meaningful statements or inspire any change, they actually made the movement easier to dismiss entirely. For onlookers who know nothing about AOC’s efforts to combat climate change, improve public education and raise money for the underprivileged in her community, cannot possibly be expected to see her as anything other than hypocritical and performative after last Monday. This kind of behavior is what makes it so easy for some conservatives to criticize Bernie Sanders for owning multiple homes while simultaneously ignoring the greed of their own political leaders.

In a country where the top one percent own more than fifteen times the wealth of the bottom 50%, it is no secret that more needs to be done to level the playing field. Yet, the gap continues to widen. This is partially due to a lack of focus and concurrence among leaders on the left, as ideologies continue to fracture within the Democratic Party. Progress will always come too slow, so long as a clear, coherent vision has not been established.

The story of the Met Gala can be summarized by the juxtaposition between what occurred in and outside of the event. While Black Lives Matter protestors were being arrested on the streets surrounding the museum for exercising their First Amendment rights, some of the nation’s most elite — who trumpet their political affiliation as standing with the poor and marginalized — enjoyed the fruits of their success with blithe.

Ultimately, all that people will remember is a few choice outfits — the voices of the oppressed continue to be drowned out by those meant to uphold them.