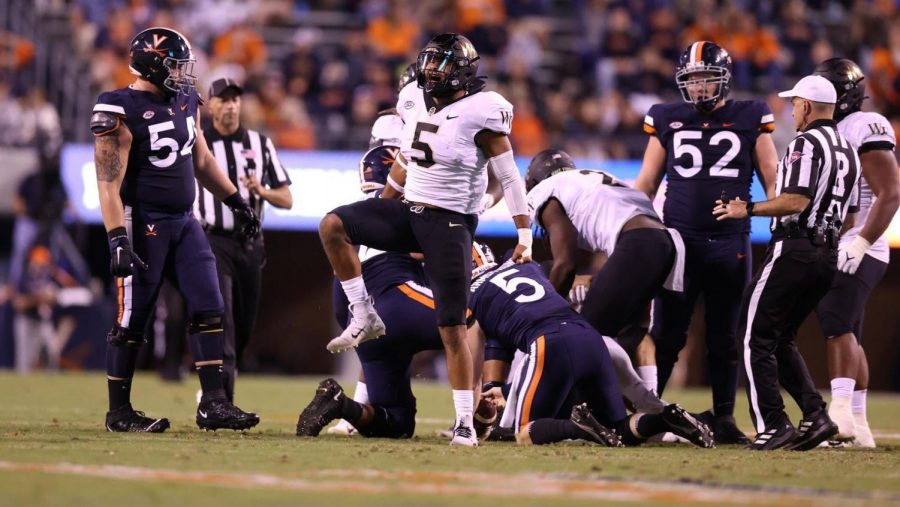 Junior linebacker Ryan Smenda celebrating after a tackle in the backfield. Smenda had three tackles-for-loss and a forced fumble in the win.

In a game where everyone seemed to be against Wake Forest, the Demon Deacons traveled to Charlottesville, Va. and controlled the game for all four quarters, taking down the University of Virginia 37-17.

This game was Wake Forest’s first away from home this season, and Head Coach Dave Clawson pointed out in his weekly press conference that the game, for a large portion of the team, would be their first in an away stadium filled with fans.

Without a doubt, the Demon Deacons faced a different environment than they have been accustomed to this season. The students spanned two sections of Scott Stadium and filled their grass hill — similar to that of Truist Field. The band was especially loud between plays, and of course, when redshirt sophomore quarterback Sam Hartman was under center, the nearly 39,000 fans in the stands — the most Wake Forest had seen all season — were raucous.

“We had a couple of times where the cadence was a little off,” Hartman said in regards to the noise. “There were times, especially in the red zone, that we had a false start or two … it got a little loud in here.”

Despite the noise that came from the Virginia fans, especially at the beginning of the game, the Wake Forest offense began the game by marching confidently down the field. Following three consecutive runs from redshirt junior running back Christian Beal-Smith, Hartman took to the air, finding redshirt sophomore A.T. Perry and redshirt junior Jaquarii Roberson.

On the third pass of the drive, offensive coordinator Warren Ruggiero’s play call sent three receivers crossing the middle of the field. The chaos over the middle allowed redshirt freshman receiver Taylor Morin to break free for a wide open, 39-yard touchdown pass from Hartman.

On defense, Wake Forest dug their heels in when they needed to the most. Virginia quarterback Brennan Armstrong — who threw for 554 yards and four touchdowns the previous week against North Carolina — carved through the Demon Deacons with his passing. Of the 67 yards gained on UVA’s first drive, 44 came from Armstrong’s arm.

The Virginia offense moved all the way to the Wake Forest 4-yard line, but from there, the defense stood tall, creating a brick wall on two Cavalier runs. On third and fourth downs, Armstrong took to the air, but the secondary broke up both passes, sending the Virginia offense to the sideline with no points.

Despite being on the 5-yard line after the turnover on downs, the Demon Deacon offense did well to move down the field, utilizing a solid run-pass balance. The offense once again started their drive with three straight runs by Beal-Smith.

These runs, along with the hurry up, opened the passing game for redshirt sophomore tight end Blake Whiteheart, who was left wide open and caught a 20-yard completion over the middle. Following the completion, the offense stalled in Virginia territory, setting up kicker Nick Sciba for a 46-yard field goal.

With the conversion, Sciba made NCAA history, eclipsing the list of kickers with the best make percentage ever with 90.1 percent. After the game, Sciba was appreciative of the honor.

On their second drive of the game, the Virginia offense once again relied on the arm of Armstrong, who completed three consecutive passes to Billy Kemp for 25 yards. Once the Cavaliers reached Demon Deacon territory, Armstrong continued to dominate, completing three more passes and carrying the ball twice.

On third-and-four, the Wake Forest defense made the big play, finally standing Armstrong up at the line and forcing a field goal. The make from Justin Duenkel brought the Cavaliers back within seven.

With freshman running back Justice Ellison in for the third Wake Forest drive, the Demon Deacon response was a quick one. On the first play, Ellison took advantage of the dominance of his offensive line to knife through the Virginia defense for a 66-yard run. At first, the run appeared to be a touchdown, but cornerback Anthony Johnson caught Ellison from behind at Virginia’s 12-yard line.

Following the big run, Wake Forest relied on rushing for the rest of the drive. Over the next six plays, Ellison and Hartman split rushes. On third down at the 1-yard line, Ellison finally cashed in, breaking through the line for another Wake Forest touchdown.

After a Virginia drive that was halted by a holding call, Wake Forest took to the ground again with their third running back, Christian Turner, a redshirt sophomore transfer from Michigan. Over the course of 15 plays, Turner ran the ball eight times for 46 yards. Inside the Virginia red zone, Hartman’s two consecutive passes to Morin were broken up, forcing Wake Forest to settle for a field goal.

With 90 seconds left on the clock, Virginia attempted to put together a drive to score before halftime. The effort was thwarted by two Wake Forest sacks from redshirt seniors Luke Masterson and Traveon Redd. At the half, the Demon Deacons led comfortably, 20-3.

That lead did not remain comfortable for long. Down by 17, the Cavaliers came out of halftime looking to re-insert themselves in the game. Virginia Head Coach Bronco Mendenhall called Armstrong’s number, pass after pass.

Following passes for 9 and 21 yards, Armstrong stepped back to pass yet again. This time, sensing a hole in the Wake Forest front seven, the quarterback took off, scampering down the field for a 31-yard gain. From there, Armstrong went back to the air, finding a crossing Jelani Woods for a 21-yard touchdown to bring the Cavaliers within 10.

The momentum in Scott Stadium noticeably shifted following the Virginia touchdown. Students and fans who looked ready to leave were now staying in their seats. The band played louder than before. In years past, this may have been where Wake Forest staggered and allowed their opponent to come roaring back. But not the 2021 Demon Deacons.

Hartman and the offense pushed back. On second down of the ensuing drive, Hartman worked the delayed run-pass option to perfection, pulling the ball out of Beal-Smith’s arms at the last second and finding a streaking Roberson open over the middle for 44 yards.

At the Virginia 12-yard line, Wake Forest finally ran a trick play. In the “Heavy Deac” formation, Beal-Smith lined up in the shotgun with Hartman at receiver. On the snap, Beal-Smith passed to a motioning Hartman, who found Whiteheart awaiting the ball wide open in the endzone. From the press box, the Wake Forest coaching staff could be heard cheering in the next box over, it was clear early in the play that Whiteheart would be wide open.

Once again, Virginia relied on Armstrong’s arm to respond. The quarterback dropped back to pass on all but one play on the following Cavalier drive. On six passes, Armstrong covered 91 yards, including a 22-yard touchdown pass to Dontayvion Wicks. With the score, Virginia once again found themselves within striking distance, down 10 with 20 minutes of game time remaining.

After the Virginia touchdown, the cannons went off inside the stadium, signaling that the Cavaliers were not done quite yet. With smoke creating an eerie haze over the field, Hartman iced the game on a drive which demonstrated the Deacons’ balanced attack. Ellison and Turner led on the ground, rushing a combined six times for 22 yards.

The big plays of the drive came off Hartman’s arm. Inside Wake Forest territory, the quarterback once again found Roberson open over the middle for a 31-yard completion. Then, in the Virginia red zone, on third-and-12, Hartman threw a calculated back-shoulder ball to Perry for a touchdown. With that, a sea of orange and blue emptied from Scott Stadium. The Virginia fans had called it a night.

In the fourth quarter, Wake Forest tacked on another field goal, but the Cavalier offense could not muster another point. The Demon Deacon defense caused two turnovers in the quarter — a fumble forced by linebacker Ryan Smenda, and a desperation pass intercepted by senior defensive back Coby Davis.

With only gold and black still in the stands and “Wake Forest” chants ringing loud, the game ended with a final defensive stop by the Demon Deacons. Wake Forest had come into Charlottesville as the underdogs, but would leave as a team to fear in the ACC.

“Right now, we are a confident football team,” Clawson said after the game. “Good teams, they flip the page. So, we will float back to Winston-Salem tonight, because that’s what you do after a road win. We will float back and we will enjoy it. We’ll have big smiles on our face, [Saturday] we’ll relax and watch TV, and then Sunday we’re getting ready for the next challenge.”

On Sunday, the Demon Deacons were named the No. 24 team in the country, the second best in the ACC. NC State was ranked at No. 23, while Clemson sits one behind Wake Forest at No. 25.

Next Saturday, Wake Forest, looking to begin the season 5-0, will play the Louisville Cardinals at Truist Field.