Men’s soccer tallies win and draw on the week 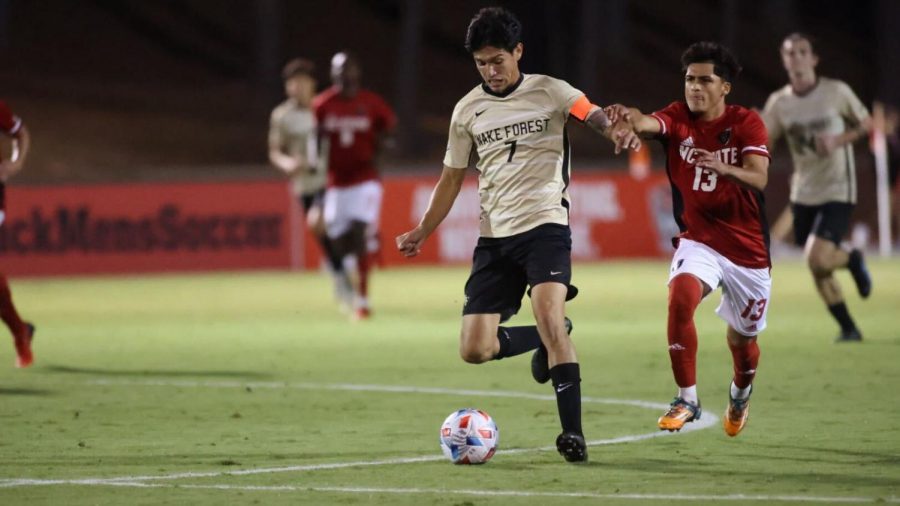 Kyle Holcomb fending off an NC State opponent on Friday.

Just seconds after a North Carolina State goal opened the scoring, Wake Forest men’s soccer silenced the crowd when sophomore Chase Oliver scored a vital equalizer to rescue a point on the road in a testy ACC clash. The contest was the second of a two-match away trip, with the Demon Deacons taking on the Patriots of George Mason and the Wolfpack of NC State.

Looking to capitalize on the momentum from their upset win over Pittsburgh, the Deacs first traveled to George Mason, located just miles from the nation’s capital.  Heavily favored in this non-conference clash and cheered on by a large contingent of alumni, Wake Forest dominated possession and opportunities, but with 18 minutes to go the Demon Deacons found themselves still in a scoreless deadlock.

It was then that Jake Swallen took matters into his own hands, shedding his marker and charging towards the until-then-impenetrable George Mason net. Now in space just outside the box, the junior midfielder ripped a right-footed shot that powered past the George Mason keeper.

In his post-match notes, coach Bobby Muuss described the game as another step on a long road.

“We need to build on this win, focus on better performances and get healthy,” Muuss said.

Four days later, Wake Forest continued their ACC slate with a trip down Tobacco Road to NC State. The Wolfpack proved to be a much more salient test than Mason, with the match seeming more like a chess game than a soccer match.

The Wolfpack were seemingly through on goal in the 66th minute, as Portuguese freshman forward Henrique Santos latched onto a loose ball at around the halfway line and found a pocket of space after dribbling around sophomore Garrison Tubbs. But junior Nico Benalcazar was too quick for the freshman, chasing him down and winning the ball back in resolute fashion.

A freshman starter for the Deacons in 2019, Benalcazar has grown into a defensive powerhouse and excellent distributor, though his periodic absences due to injury have clearly hampered the cohesion of the team. Against George Mason, Benalcazar demonstrated his versatility by slotting into a defensive midfield position, where his stellar passing ability helped the Deacs rapidly advance up the pitch while his defensive acumen denied any significant counter-attacking opportunities.

Twenty-five minutes into the second half, Wake Forest failed to clear a looping NC State corner. The ball careened around the box before a vicious short-range shot forced a fantastic reflex save by Trace Alphin. Unfortunately for the freshman goalkeeper, the rebound fell to the feet of Alex Hernandez who powered the ball home from close range.

Despite conceding, the Deacs immediately responded, demonstrating their growing confidence following the upset win against Pitt and the scrappy victory over George Mason.

Thirty seconds after kickoff, Omar Hernandez found himself with the ball near the NC State corner flag. The junior midfielder cut the ball back to Oliver. The sophomore coolly slotted home a first-time, left-footed shot into the bottom corner of the Wolfpack net, his third goal of the season.

Oliver has grown into one of the primary attacking threats for a Wake Forest team in need of consistent goalscoring. Oliver has scored three goals in the last five matches after going scoreless last season. Playing with an ever-present swagger which is evident in his dynamic celebrations, Oliver has combined his flashy dribbling with clinical ability, providing at least a partial answer to Wake Forest’s offensive questions.

Following Oliver’s equalizer, the two teams traded half-chances for the final quarter hour, then headed into overtime still deadlocked at one. Both teams probed each other’s defenses, struggling to generate true chances even as the match went into overtime. In the end, both teams seemed willing to take home a point in college soccer’s most competitive conference, leaving the Deacs with a win, a draw and a loss in ACC play.

The Deacs host Clemson on Friday, Oct. 1. The Tigers entered the weekend ranked No. 2 in the latest United Soccer Coaches poll, but lost to Pitt on Saturday thanks to two second half goals from the Panthers.