Favorites such as Michigan State and Auburn win by slight margins 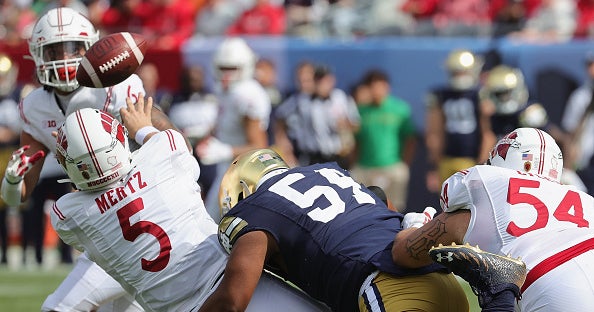 After a relatively calm slate of games last week, college football descended right back into chaos on Saturday. Despite only two matchups between ranked teams, many of the nation’s top squads either fell flat or narrowly avoided such a fate, making this one of the more entertaining weeks of football so far this season.

In Saturday’s first ranked showdown, No. 12 Notre Dame took on No. 18 Wisconsin. The game started relatively slow, but after Chris Tyree returned a kickoff for a touchdown to give Notre Dame a 17-13 lead in the fourth quarter, the Irish never looked back.

The Fighting Irish blew the game open from there, adding a touchdown drive, a field goal drive and two interceptions returned for touchdowns to give them a big 41-13 victory.

The day’s second matchup between ranked teams created some excitement within the SEC, with No. 16 Arkansas upsetting No. 7 Texas A&M. The Aggies had not yet surrendered a passing touchdown all season, but gave up two in the first half to Arkansas QB K.J. Jefferson, including an 85-yard bomb. Arkansas went up 17-0 in the second quarter, and despite an injury to Jefferson early in the third, their defense held on to secure a 20-10 win against an A&M team they had not defeated since 2012.

The Wolfpack weren’t perfect either with 11 penalties for 105 yards and three missed field goals. But NC State was ultimately able to do just enough to get the win against Clemson after losing eight straight to the Tigers. This loss effectively eliminates Clemson from playoff contention and leaves the ACC wide open.

No. 14 Iowa State fell to Baylor in dramatic fashion, coming back from a 12-point third quarter deficit before failing to convert on a two-point attempt late in the fourth that would have tied the game.

The Cyclones outgained Baylor 479 yards to 282, but Baylor successfully jumped out to an early lead and used big plays in the special teams phase to hold on late. Treston Ebner returned a kick 98 yards for a touchdown and returned a punt 41 yards to set the Bears up for a field goal that solidified their win.

No. 22 UNC was also upset by Georgia Tech, but unlike other ranked teams, they lost in a blowout. Quarterback Jeff Sims came off the bench for the Yellow Jackets in the second quarter and dominated, passing for 112 yards and a touchdown and running for 128 yards and 3 scores.

UNC struggled on offense — particularly in the run game — after a dominant showing on that end against Virginia last week, which made this loss even more disappointing.

Many top teams briefly succumbed to the chaos, but were able to avoid upsets. No. 4 Oklahoma used a 30-yard fieldgoal by kicker Gabe Brkic as time expired to beat West Virginia 16-13. Oklahoma’s offensive struggles continued in what ended up being their third one-score victory of the season. Quarterback Spencer Rattler — once thought to be a Heisman hopeful — was booed by his home crowd after an interception, but completed all 6 of his passes on the game’s final drive to set up the deciding field goal.

No. 20 Michigan State needed big plays late from their defense and special teams to defeat Nebraska in overtime. After their offense completely stalled, failing to convert a first down in the entire second half, Jayden Reed returned a Nebraska punt 62 yards for a tying touchdown with under 4 minutes to play. In overtime, defensive back Chester Kimbrough’s interception set up a game-winning field goal that gave MSU a 23- 20 win.

No. 23 Auburn relied on a highly controversial call to come back from a 12 point halftime deficit against Georgia State. The Tigers, led by backup quarterback TJ Finley after the benching of starter Bo Nix, took the lead on a drive during which a pass that originally appeared to be dropped was ruled as complete. That call was upheld upon review.

Auburn’s lead grew to 10 on a pick-six after Georgia State regained possession in the final minute, resulting in a final score of 34-24.

Neither No. 3 Oregon nor No. 6 Penn State were in serious upset danger, but both would have liked to be a bit more dominant against weak opponents in winless Arizona and FCS Villanova, respectively.

A few teams managed to take care of business and avoid the week’s mayhem. No. 1 Alabama took care of Southern Miss 63-14, and No. 2 Georgia obliterated SEC opponent Vanderbilt 62-0, scoring 35 points in the first quarter alone.

Those two teams continue to look like the best in the nation. Additionally, No. 10 Ohio State handled Akron 59-7, and No. 17 Coastal Carolina blew out University of Massachusetts 53-3.