In their first tight competition of the season, Wake Forest proved resilient, winning off the foot of Nick Sciba 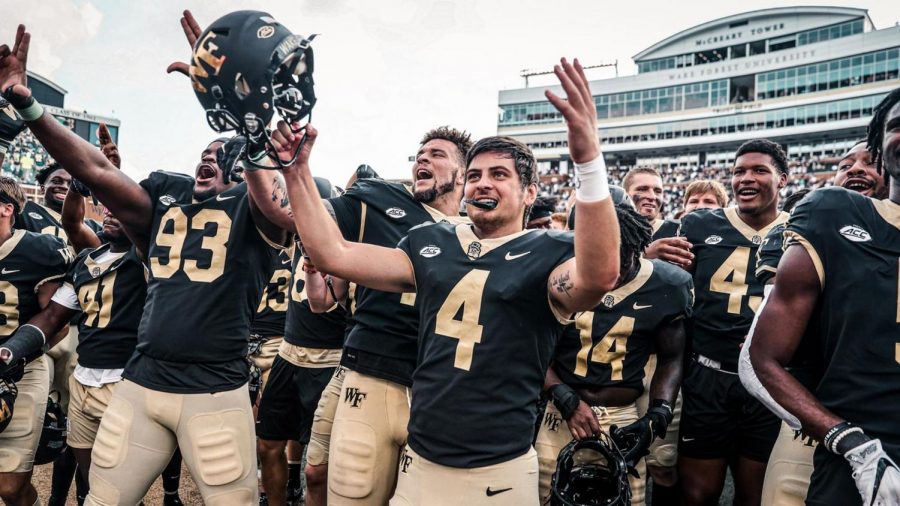 In front of a packed house on Parents Weekend, Wake Forest finally was forced to play a four-quarter game, pulling out a hard-fought 37-34 win against Louisville.

The victory keeps Wake Forest’s undefeated season alive with a 5-0 record, a mark they reached in 2019 before losing to Louisville in heartbreaking fashion at home in their sixth game of the season.

With the win, Wake Forest also moved up in the AP rankings to No. 19 in the country, tied for their highest mark since 2008.

In their first drive of the game, Wake Forest made a concerted effort to move down the field, capitalizing on a 42-yard pass from redshirt sophomore Sam Hartman to redshirt junior Jaquarii Roberson. On second down at the Louisville 18-yard line, Hartman was sacked. His third-down 10-yard dash did not recover the lost yardage. As a result, the Demon Deacons struck first but only earned a disappointing three points off the foot of kicker Nick Sciba.

During Louisville’s first drive with the ball, it became clear that the battle between the Cardinal offense and the Wake Forest defense would be a struggle all day. Over nearly six minutes, quarterback Malik Cunningham picked apart the Demon Deacons for short-yardage passes while incrementally adding rushes for lead back Travion Cooley.

On three instances in the drive, Wake Forest forced Louisville into third-down situations, only for the Cardinals to convert. After the third and final conversion, the Louisville offense capitalized on a tired defense. Cunningham completed a 20-yard pass to Cooley and then ran into the endzone on the next play.

In response, Wake Forest once again relied on Hartman to make plays. On the second set of downs after a 12-yard pass to Roberson, Hartman used his feet on third-and-five to pick up the first down. Then, on second down, the quarterback found a streaking Taylor Morin on the left side for a gain of 28 yards. Following an 11-yard rush from redshirt junior running back Christian Beal-Smith, Hartman then ran through the offensive line for a one-yard touchdown.

Down by three, Cunningham took to the air against the Wake Forest defense. The quarterback passed the ball on three consecutive downs, highlighted by a 17-yard pass to Jordan Watkins and a 36-yarder to Dez Melton.

The Wake Forest defense held firm at the Demon Deacon 27-yard line, holding running back Jalen Mitchell to two yards on a first down carry. On third down, after a Cunningham incompletion, it seemed all for naught, as Wake Forest gave Lousiville a free five yards on an offsides call to move to third-and-short. But once again, the defense made a big play, as freshman defensive lineman Jasheen Davis broke through the Louisville offensive line to sack Cunningham, forcing a field goal. For the first time since kickoff, the game was tied.

Wake Forest’s ensuing drive only lasted 40 seconds before they were forced to punt the ball away. Louisville’s drive lasted far longer. For six minutes, similar to the Cardinals’ first drive of the game, Louisville picked apart the Wake Forest defense, this time heavily utilizing the run.

Over 12 plays, Louisville ran the ball nine times with Cooley and Mitchell. Even when Cunningham dropped back to pass twice, it was to run the ball himself. Overall, the rushes accounted for 67 of the 80 yards gained on the drive. To cap it off, Cunningham rushed into the endzone himself from five yards out to give the Cardinals their largest lead of the game.

Losing by a touchdown, the air inside of Truist Field began to change. It was noticeable. The crowd was less raucous, and the confidence of the student section began to deteriorate. This change was even more evident as Wake Forest was forced to punt on a three-and-out that included two missed passes and a sack. For the first time all season, there was fear that the Demon Deacons’ undefeated season might once again end at the hands of the Cardinals.

With a golden opportunity to go up by two touchdowns, Louisville faltered at the hands of the Wake Forest defense, going three-and-out themselves.

The Wake Forest offense returned to the field with a balanced attack. Following a run by transfer running back Christian Turner, his first of the game, Hartman completed two consecutive passes to redshirt sophomore A.T. Perry and Morin for a total of 18 yards. Then, with two rushes, Turner gained another 13 yards.

Hartman completed redshirt senior tight end Brandon Chapman for seven yards on second down, leaving a third-and-three at the Louisville 47-yard line. On third down, Turner was stuffed at the line, leaving the offense with a fourth-and-two.

Sensing how necessary tying the game was for Wake Forest, Head Coach Dave Clawson left the offense on the field. On a bold call, Clawson put the ball right back into the hands of Turner, who rewarded him with five yards and a first down.

From there, Hartman scrambled in the pocket on the next play, pulling up at just the right moment to find Morin with a step over the middle. The ball hit the receiver in stride for the touchdown. With guts from the coach and skill from the quarterback, Wake Forest was back in the game.

Despite two consecutive plays netting 28 yards that brought the Cardinals into Wake Forest territory, Louisville was forced to punt after the Wake Forest touchdown. The response drive from the Demon Deacons seemed to be quite similar. Following a 26-yard completion to Roberson to move the Wake Forest into Cardinals territory, Hartman threw three incompletions, forcing a punt.

In the air, the ball rotated more than normal off the foot of punter Ivan Mora. When the ball reached returner Josh Johnson at the Louisville 12-yard line, the extra rotations forced it right through his hands and into those of Wake Forest safety Ja’Sir Taylor.

With 30 seconds remaining on the clock, Wake Forest made it all the way to the Louisville goal line. But with only seconds remaining on the clock, Beal-Smith was stuffed at the line. The clock hit triple zeroes, except somehow Clawson had gotten a timeout call with fractions of a second left on the clock. Despite heavy arguing from the Louisville sidelines, the call stood, and Sciba kicked the ball through the uprights to give the Demon Deacons a slim three-point lead at halftime.

After the game, Clawson walked through the risky final run before the field goal.

“I told the official before,” he said. “As soon as the ball is down, I’m going to use a timeout at the one-yard line. It was a calculated risk. I knew that that would be a three-second play. I got lucky. Those three points are as important as the last three points.”

In the second half, in a game where the offenses had primarily won against the defenses, the tides shifted, with Louisville and Wake Forest combining for three consecutive punts.

On their second drive of the half, the Demon Deacon offense came back to life. On the first set of downs, an incomplete pass, a five-yard rush from Hartman and an ensuing false start left Wake Forest with a daunting third-and-10 at their own 34-yard line.

Hartman made the big play, finding Morin crossing to the left sideline for a 20-yard completion. Except, he was ruled out of bounds. Down by three, Louisville would be getting the ball back. But, upon further review, indeed Morin had dragged his toe inbounds at the last second, and the call was reversed.

After three rushes, Hartman found Morin twice again for completions of 17 and 4 yards. On third-and-six, Hartman dumped a pass off to freshman running back Justice Ellison to convert. From there, Ellison’s number was called again, and he rumbled into the endzone from seven yards out to give Wake Forest a 10 point lead.

Just as the air had turned at Truist Field in favor of Louisville, the momentum shifted back to Wake Forest, especially after Louisville was forced to quickly punt the ball away on their next drive.

But, after a short, unsuccessful drive from the Wake forest offense, Cunningham returned to the field on a mission for Louisville. This time around, his weapon of choice was his arm. Pass after pass, Louisville marched. During the drive, Cunningham completed passes of 24, 18, six and nine yards. And then, after a 16-yard rush from Mitchell, Cunningham threw his final ball of the drive, a 10-yard touchdown to Ahmari Huggins-Bruce. The Wake Forest lead was once again a slim three points.

With 11 minutes remaining on the clock, Hartman, at seemingly the worst possible time, made his first big mistake of the game. On third down, the quarterback heavily overthrew his intended receiver, tight end Blake Whiteheart, and Qwynnterrio Cole intercepted the ball.

Cole returned the interception to the Wake Forest 25-yard line, but an unsportsmanlike conduct penalty moved Louisville back to the 40. The penalty proved costly, as the Cardinals could only convert a field goal to tie the game.

With the game tied, Hartman rebounded nicely from the interception, leading Wake Forest down the field while also taking important time off the clock. On third-and-six at the beginning of the drive, Hartman found Roberson open on the left sideline for a 31-yard completion, slightly easing the growing tension in the pro-Deacons crowd.

Following an 11-yard completion to Perry to bring the Demon Deacons to the Louisville 27-yard line, the offense went to the run game, rushing five consecutive times for 20 yards. Left with another third-down, Hartman fled the pocket to the right and, at the last second, found Perry in the back corner of the endzone for the touchdown. With nearly four minutes remaining on the clock, Louisville was once again trailing by seven.

After the game, Clawson was proud of Hartman’s response.

“I don’t know a year ago if [the response] was something he could have done,” he said. “The second he threw the interception, I looked at him and I’m like, he’s fine. He moved on. I give him a lot of credit for that.”

The lead didn’t last for long. On the second play of the Cardinals’ drive, the offense stunned the Wake Forest crowd as Cunningham found Tyler Harrell streaking over the middle. The ball hit Harrell on the Louisville 43-yard line, yet the receiver didn’t stop there. He broke the initial tackle attempt and sped past the Wake Forest defense an additional 57 yards for the touchdown. After only a minute, the game was tied.

With nearly three minutes on the clock, Wake Forest managed the clock as they moved down the field, primarily relying on their running backs along with interspersed passes. On third-and-four, after two rushes to begin the drive, Hartman hit Roberson for a 12-yard gain. Then, on the ground, Ellison beat the Louisville defense to the left edge and hustled down the sideline for 15 yards.

After another Hartman completion, which brought Wake Forest to the Louisville 28-yard line, Ellison rushed four consecutive times for 20 yards. During these runs, the Cardinals used all three of their timeouts. Following the fourth Ellison rush, bringing up fourth down, Wake Forest ran the clock down to 25 seconds and brought Sciba in for the field goal.

From 29 yards out, the kick was true, and the crowd rejoiced. With 22 seconds left, Wake Forest held the lead, and Louisville was left with no timeouts. On their final play of the game, the Cardinals tossed lateral after lateral to no avail. The Demon Deacons finally tackled a Cardinal, and the upset was avoided.

Now both ranked No. 19 and 5-0 for the second time in three years, Wake Forest will look to make it to 6-0 for the first time since 1944. On Saturday, a win against Syracuse in the Carrier Dome could also see the Demon Deacons reach their highest ranking since 2006 when they were No. 14 in the country and won the ACC Championship.