Toler(h)ated to debut next week 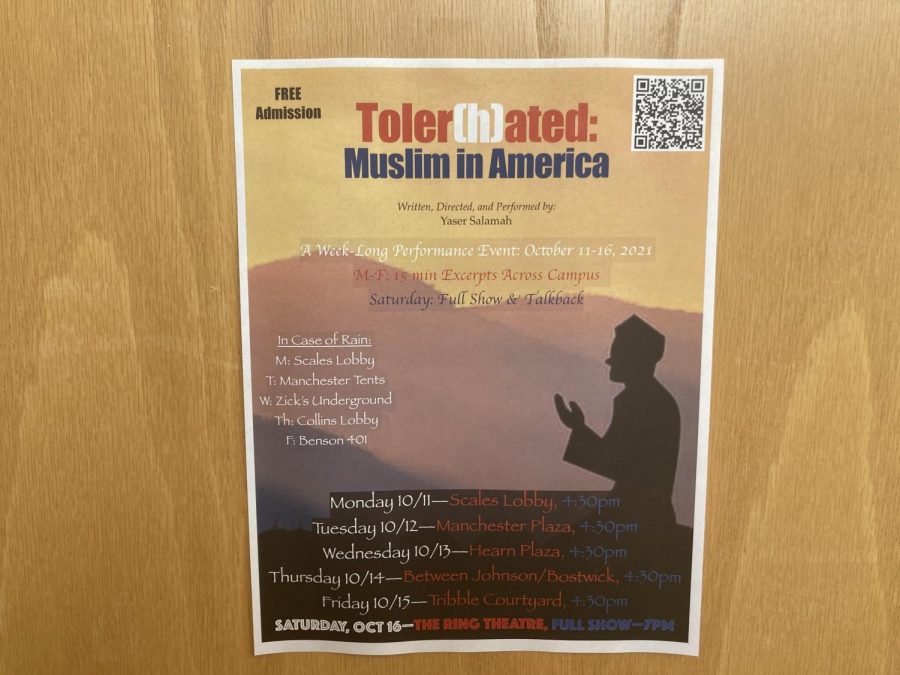 That is the message that Yaser Salamah – a theater major – hopes to convey by performing a play he wrote and directed. Salamah’s play, “Toler(h)ated” is about being Muslim in America.

The play will be performed in two media: 15-minute excerpts during the week of Oct. 11 and an hour-long show on Oct. 16 in the Ring Theater.

“The first Muslim to ever win an Oscar won it five years ago,” Salamah said. “There’s never really been someone who looks like me winning [Oscar] awards, just being on screen or having representation. Being able to reclaim this campus in a sense – this largely white, largely Christian campus – means a lot. It’s kind of everything I’ve wanted to do.”

When Salamah was a freshman, he signed up to participate in a week-long workshop offered by renowned performance artist Tim Miller. Salamah performed a piece, “Never,” which expressed his views surrounding homophobia within Islam and how it is not representative of the Islamic faith at all.

After performing, Miller approached Salamah and said that no one was writing stories like his, that no one was capturing the perspective of a Muslim living in America post-9/11. Miller encouraged Salamah to continue voicing his story, and over the course of three years, Salamah wrote a series of 20 pieces. Now, he will be performing 10 of them.

Salamah’s pieces explore his experiences being Arab and Muslim in the world post-9/11; the story topics range from mental health to hate crimes to coping through trauma.

“I tried to find a wide range … [I’m considering] everything I could think of,” Salamah said. “I talked about systemic discrimination and I talked about my experiences with mental health. I also talked about how being minoritized in America makes you feel isolated, but that we can find community with each other – that together, we can get to the other side of it.”

Salamah’s work even calls attention to incidents on campus, specifically the consequences of stereotypes.

“We have a Muslim students’ lounge, and one of my friends once mentioned that they would get afraid when they would see someone walk by the door, especially after the New Zealand massacre a few years back,” Salamah said. “He talked about how every time he saw someone pass, it would scare him. And that really put things into perspective for me. It’s actually one of the pieces I wrote about – that conversation. Even when something isn’t happening directly, there’s this fear, this expectation that something will.”

Whether his performance evokes this sort of fear, anger, sadness, indifference or other emotions in audience members, Salamah hopes that people will listen to his stories and at least feel something.

“This [play] is to inspire change,” Salamah said. “So it’s not for entertainment purposes. I mean, I hope people are entertained, but also, some of the stuff is relatively traumatic, so people won’t necessarily be leaving with huge smiles on their faces. I just want them to feel something and to use whatever they’re feeling to enact change.”

After graduation, Salamah plans to move to California and hopes to contribute to the growing presence of Muslim individuals on screen and stage. He also hopes to foster a sense of belonging within the next generation, especially for his younger family members.

“It’s beautiful to see people like me are finally finding their voice,” Salamah said. “It hurts a little bit knowing that it took until I was 20-years-old to see it, but I have seven nieces and nephews, so knowing that they will grow up having the representation I didn’t have is heartwarming.”

He continued: “My niece was watching a movie and I said I wanted to be one of the people on the screen. She asked if she could see me in a movie one day, and it was so sweet. It warms my heart thinking that, hopefully, one day, the answer to that is yes.”

Next week, for his shorter excerpts, Salamah plans to strategically use locations around campus to help set the scene for his work. For instance, one of the performances about systemic discrimination in academics will take place on Manchester Plaza, surrounded by all of the academic buildings. After the hour-long performance, Salamah will provide audience members with QR codes that lead to more in-depth readings, petitions and donation links, so that they can further their understanding of his stories.

“If I’m trying to do activism through art, it doesn’t just stop with me being on stage,” Salamah said. “The audience is going to go home and forget about it the next day. That’s the beautiful, but also the tragic thing about live theater – it lives and then it dies. But, if there are resources attached to it, in that moment, when you’re feeling those high emotions, you can apply those emotions to actually enact change.”