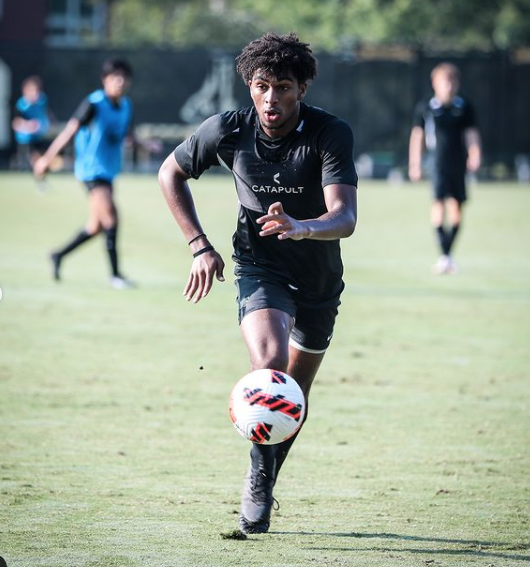 Wake Forest men’s soccer gained a serious weapon with the addition of Julian Kennedy, a freshman from Orlando, Fl. Kennedy played with the Orlando City academy since 2015. After graduating high school, he joined the club’s USL League One side Orlando City B during their fall 2020 season. To Kennedy’s surprise, Wake Forest extended him an offer last December, and he joined the team as a mid-year enrollee.

Kennedy was on the sidelines as early as last spring, and made his first start for the team on Aug. 28 against VCU. The freshman forward may be just starting his career here in Winston-Salem, but he already has extensive experience and has his sights set on playing professionally in Europe after his four years as a Demon Deacon.

Christina DeNovio: What did you do last fall, and how did you end up at Wake Forest?

Julian Kennedy: I took a gap semester, so I was playing soccer before I came to Wake. I wasn’t even going to come here until the first week of January, which was when I committed — it was really late notice. I graduated high school in 2020. Now that I’m here, I could take extra classes in the summer and graduate in 2024 like I’m supposed to, or I could stay on this track and just graduate in 2025.

CD: When did you start playing soccer?

JK: I started playing soccer when I was four years old. Looking back, it’s definitely been a while.

CD: How was your experience playing for the Orlando City academy?

JK: It was really good. I started playing when the club first started, when I was eight or nine, and I’ve been playing with them ever since. Last year, I was able to sign a contract to play a full year with the first team and second team, which was really cool.

CD: Can you describe the shift to the USL side?

JK: It’s a lot more demanding considering I’m playing with grown men. Also, I had to live on my own for six or seven months in an apartment with my teammates. I had to move out of the house, and apartment life was pretty different from living at home. I missed my parents’ cooking the most. I had to cook for myself or go out to eat. But, it was an easy adjustment from going from there to college — I was already used to being on my own.

CD: What was it like being on the team last spring?

JK: I would train every day with the team and go to the gym with them every day. I’d do pretty much all the stuff my teammates were doing, I just wasn’t able to play in the games.

CD: What was it like watching from the sidelines all season?

JK: It was a bit weird at first because I was a player who was always playing and involved with the team. So, sitting on the sideline, you get to see the game from a different perspective. It was good to watch the team play and grow, and now that I’m able to play for them, I appreciate it more.

CD: What advantage do you think you have over the other freshmen that weren’t here in the spring?

CD: The team has had a rocky first half of the season. What will it take for the team to return to form?

JK: Honestly, we just have to start playing like a team again. In previous years we’ve done that, and that’s why our results have been really good. This year, our team has a lot of young players. We have around 12 freshmen and only two seniors. So, I think once the freshmen — myself included — get more comfortable with the team, that’s when things will start to pick up.

CD: How did you choose Wake Forest?

JK: It’s kind of a funny story. Two years ago, I was a junior, and I reached out to Wake’s program. I didn’t get a response back for two years. So I took Wake Forest out of the pool of colleges I was hoping to go play for. Around December, when the USL season ended, I had narrowed it down to Clemson or Georgetown. Those are the two I was about to choose between, and then Wake Forest unexpectedly reached out to me. They offered me a really good scholarship, so I decided to take it. Last year, I really thought about focusing on soccer rather than going to college. That’s why I signed the contract with the USL team. I thought, “I’m just going to go pro and go from there.” But when the season ended, I felt like going to college would be a better option long-term because I can’t play soccer my whole life. So, I decided to pursue college and get an education, but I still plan on trying to go professional after.

CD: Do you have aspirations to play for Orlando City Soccer Club one day?

JK: Yeah, I’d probably want to start my career there just because that’s where I’ve been my whole life. Afterwards, the main goal is to go to Europe. I’d love to play in England or Germany. The MLS is definitely getting more competitive, though.

JK: Scoring goals and creating goals. And then being able to celebrate with the team is nice. I find the most joy in creating goals with my teammates. I haven’t gotten my first goal at Wake yet, but it’s coming soon.

CD: When you step onto the pitch, are you playing for anyone in particular?

JK: I try my best to make my family happy. They always enjoy being able to watch me play on ESPN. I really just thank God for the opportunity to play soccer. I think it’s all because of God that I’m in this position, and He’s blessed me with the opportunity to be able to play here. I always give Him thanks for everything that He’s done for me.

CD: How do you balance the team and academics?

JK: It’s pretty hard. Last semester, not being able to play and just practicing while doing online school, was easier. Now, I’m still adjusting to having to go to class. Today, for example, I’ve had class all day, and then practice. It’s a lot of work, but it’s fun at the end of the day. Just being with my boys and playing soccer, I enjoy it all the time. I have at least one teammate in each of my classes. We have study coaches, who help us stay on top of our work, which is nice. We also have a bunch of tutors, which makes the academics more manageable. We get to make our own class schedules, too.

CD: What does a typical day look like for you?

JK: We usually have training either at 8 a.m. or at 3:45 p.m. If we have training in the morning, we get back at around 9:30 a.m. Some of us have classes at 10, but I don’t have class until 12:30 p.m., so I usually like to come back to the locker room and relax and do homework. Then, I go to two or three classes, and then just chill for the rest of the play. I’ll play Xbox or watch TV back in my room.

CD: Do you know what major you want to pursue?

JK: I’ve been leaning towards something in business, but I know the business school is pretty competitive here. It’s between business, psychology or maybe communication.

CD: Do you have any goals you hope to accomplish during this season or long-term?

CD: Can you describe the atmosphere on the team?

JK: We’re competitive, we want to play as much as we can. There’s a lot of wanting to better each other and help each other grow as well, which is really good. It’s unlike any team I’ve ever been on before. Just the family dynamic, and everyone’s there for each other, everyone helps each other out, on the field and off the field.

JK: They’re really good coaches. They always push for the best from all of us. I haven’t been here that long, but I feel like my connections with the coaches, especially Coach Bobby [Muuss], are going really well. He’s helped me out a lot, even though it’s been a short time. I felt welcomed even before I committed.