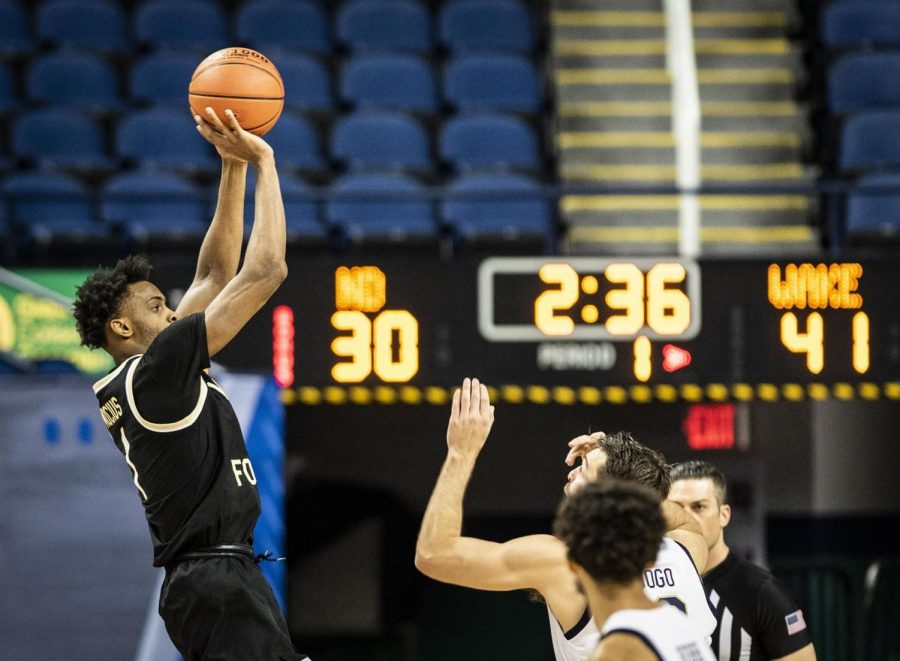 LaRavia was a second-team All-Conference player at Indiana State.

Following a shortened and unique first year at the helm of Wake Forest men’s basketball, Head Coach Steve Forbes is looking to make strides toward returning Demon Deacons basketball to relevance. In year two — thanks to new transfer rules and strong recruiting — Forbes has brought in more of his own personnel to create a culture and roster to fit his style.

Some talent left the roster, but none of those departures really came as a surprise. Ian Dubose is playing overseas in Germany, Ismael Massoud now plays at Kansas State and Ody Oguama moved on to Cincinnati. Guards Jahcobi Neath and Quadry Adams transferred to Wisconsin and St. Bonaventure, respectively. Other departures include Jonah Antonio, Isaiah Wilkins, Emmanuel Okpomo, Jalen Johnson, Sunday Okeke and Blake Buchanan.

Yes, that’s a lot of names, but the core of last year’s team is back, and a strong group of transfers and recruits have arrived.

Wake Forest fans have reasons to be optimistic about what this young roster could become under a hungry, energetic coach, who for the first time, had a full summer to prepare for the season.

Forbes spoke on the turnover, saying, “I love our roster. We have 13 ACC players on our team. I did not have that last year. There’s not one player on our team that cannot play in the ACC.”

Mucius is the last scholarship player remaining from the Danny Manning era. The versatile, high-energy athlete has improved every season and is the emotional leader of this team. Coming off of a solid season — averaging 10.3 points and 5.2 rebounds per game — Mucius still oozes potential and will look to improve his three-point shooting.

The Winston-Salem native followed Coach Forbes from East Tennessee State last season and ended up being the leading scorer for the Deacons. Williamson was able to transition to the ACC seamlessly, averaging 12.9 points, 2.5 assists and 1.3 steals per game last year. The quick, twitchy guard will once again serve as an important member of this team given his ability to orchestrate the offense, get to the basket and knock down the long ball.

LaRavia is a do-it-all player who transfers in from Indiana State, where he earned All-Missouri Valley Conference Second-Team honors last year, averaging 12.5 points and 6.1 rebounds per game. A good defender and a balanced offensive player, LaRavia’s versatility and blend of size and skill should make him a key piece and starting player on this team.

Williams is an exciting, bouncy guard who transferred in from Oklahoma, where he averaged 6.7 points per game last season. Williams scored a season-high 15 points in a March Madness Round of 32 game against No. 1 seeded Gonzaga. Williams isn’t much of a shooter for a wing player, but his defensive intensity, explosive athleticism and experience should be enough to make him a starter under Coach Forbes.

Walton is a skilled big man who started 23 games for Colorado (No. 5 seed in the NCAA Tournament last season) and averaged 6.5 points per game. Walton is a stretch five who can shoot from deep. His ability to space the floor from the center position is something that Wake Forest has been lacking in recent years.

Whitt had a tough assignment to adjust to ACC play as a kid who should’ve been in high school and joined the team mid-season. He definitely struggled with turnovers and perimeter defense, but showed plenty of promise with his court vision and scoring ability when he got more comfortable down the stretch. Whitt shot 40.8% from downtown in the final 11 games of the season.

Sy struggled with illness and injury last season, but the Ole Miss transfer still averaged 9.0 points and 5.5 rebounds per game in 2019-20. The big man from Senegal can finish around the rim, plays a good midrange game and is a solid defender. His experience will definitely be valuable on this young team.

McCray is a big, athletic guard who was a consensus top-125 recruit in the rankings. McCray has impressed the coaching staff so far with his abilities on both ends of the court and should be a part of the rotation often.

Hailing from Worthing, England, Hildreth is an intriguing prospect who was ranked as the top-recruit in the UK. Hildreth is a talented offensive guard who will bring shooting and crafty scoring ability to this team.

Another player who calls England home, Marsh is an enticing prospect given his combination of size and athleticism. The seven-footer averaged 7.9 points and 4.6 rebounds per game in the French Espoirs League last winter.

There’s no doubt Ingraham has had horrible luck. After tearing his achilles and missing his freshman season, he only played in two games last year due to medical reasons. His energy, size and rebounding ability should make him a contributing piece off the bench.

Taylor is a big guard who decommitted from Clemson and decided to come to Wake Forest back in April. Three-point shooting is a strength of his, and he could be a valuable piece off the bench.