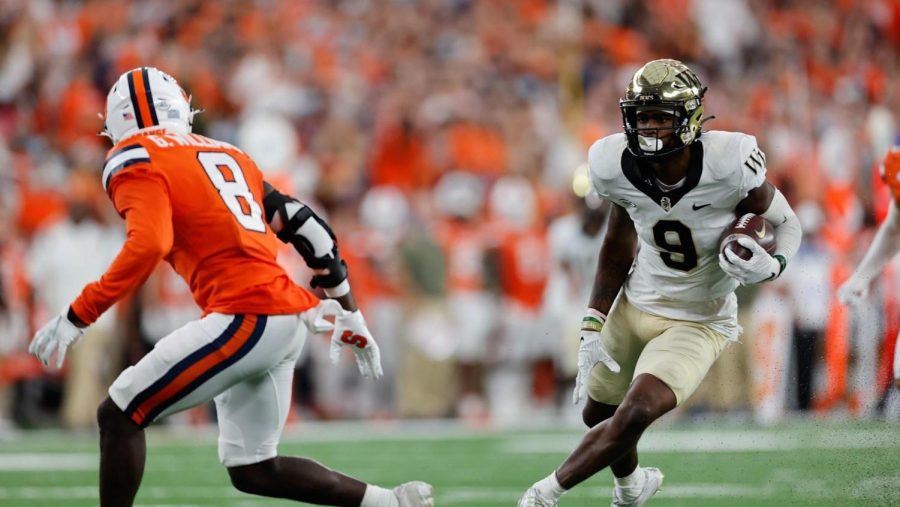 On Saturday, looking to move to 6-0, the Demon Deacons battled back against a strong Syracuse squad to win in overtime, 40-37. In doing so, they became the first team in Wake Forest history to start 4-0 in the ACC.

The last time Wake Forest was 6-0, France was occupied by Germany, the ACC did not exist and the head coach of the Demon Deacons was named Peahead Johnson. The year was 1944.

On the game’s opening drive, the Wake Forest offense made quick work of the Syracuse defense, relying on back-to-back passes to redshirt junior wide receiver Jaquarii Roberson for a total of 53 yards to reach the redzone.

Once inside the Syracuse 20-yard line, however, the Demon Deacon offense could not capitalize. Redshirt sophomore quarterback Sam Hartman underthrew a pass on third down to wide-open tight end Brandon Chapman. On a drive that looked like a touchdown waiting to happen, Wake Forest had to settle for a field goal.

On offense, Syracuse made it clear from the outset what their game plan would be. Despite Wake Forest preparing all week for the run-pass option with quarterback Garrett Shrader and running back Sean Tucker, the Orange carved through the Demon Deacon defense.

After a 21-yard completion to start off the drive, Syracuse rushed the rest of the way behind Shrader and Tucker for 57 yards. A six-yard rush by Tucker capped off the drive with a touchdown for the Orange.

After the touchdown, the next three drives resulted in little offensive success for either side, with each series resulting in a punt. Wake Forest looked especially lifeless, as they could not get their passing game going.

With four minutes remaining in the first quarter, the Syracuse offense was once again able to march the ball forward on a drive dominated by Shrader and Tucker. On a third-and-seven near midfield, Wake Forest seemed to finally have the Syracuse offense faltering with all receivers covered, only for Shrader to escape and gain 13 yards for the first down.

The Shrader scramble and a subsequent eight-yard run by Tucker opened up the passing game for the Orange. On first down, just outside of the Wake Forest redzone, Shrader went to the play action, faking the ball to Tucker before finding a streaking Anthony Queeley over the middle for a 24-yard touchdown.

With his team down by 11, Hartman took command of the Wake Forest offense, bringing the Demon Deacons back into the game with his arm and legs. On first down, Hartman pulled the ball out of running back Justice Ellison’s chest on the option and scrambled up the middle for a gain of 11 yards.

Then, on the following set of downs, on third-and-two, Hartman weathered the Syracuse blitz and was able to find tight end Blake Whiteheart over the middle for a 15-yard reception.

Following a three-yard loss by redshirt junior running back Christian Beal-Smith on the ensuing first down, Hartman stepped forward in the pocket and launched a deep ball over the middle to receiver A.T. Perry. Perry slowed down to make the catch at the five-yard line, turned 90 degrees before evading a Syracuse cornerback and diving into the endzone.

With Wake Forest within four points of their opponents, the Syracuse offense did not back down. Responding to the Demon Deacons’ adjustment to stop the run, Shrader took to the air more consistently, throwing the ball three times for completions.

Just outside the Wake Forest redzone, Shrader went back to using his feet, evading the Demon Deacon pass rush for a 15-yard gain. On third-and-one at the five-yard line, Shrader ran again on a designed run, jostling through the defensive line and breaking free for the touchdown.

With just under seven minutes remaining in the half, Wake Forest looked to respond and once again close the gap. But, after securing one first down, Hartman faltered.

Looking to pass, Hartman avoided the Orange pass rush and shifted to the front of the pocket. At the last second, he released a deep ball, searching for Donald Stewart near the endzone. The ball was underthrown into triple coverage, and it was tipped into the hands of cornerback Jason Simmons.

Starting at the Syracuse six-yard line, the Wake Forest defense did well to keep the Orange from extending the deficit to three scores. The defensive line stopped Tucker on a first down run at the line of scrimmage, then forced two straight incompletions from Shrader to get off the field.

On the first set of downs for the Wake Forest offense, a third-and-eight soon became a third-and-23 after false start and holding penalties. With such a long distance to go, Hartman hung back in the pocket, and with ample time afforded by his offensive line, found Roberson open over the middle for 25 yards.

From there, the Demon Deacons rushed three straight times for 18 yards to reach the Syracuse one-yard line. After being denied on Christian Turner’s first rush of the game, Hartman ran the ball in himself for the touchdown, moving the deficit to only four at the half.

After forcing a Syracuse punt to begin the second half, Wake Forest forged ahead with three passes from Hartman for a total of 24 yards. At the Syracuse 12-yard line, the offense rushed twice in a row with Beal-Smith to gain two more yards.

On third down, Hartman was unable to evade the pass rush and was sacked. Wake Forest was forced to settle for a Sciba field goal.

Leading by one, Syracuse was able to secure one first down on offense with a Shrader rush. On the next set of downs, though, they were set back by a holding penalty and a lack of success rushing the ball, forcing a punt.

Looking to regain the lead for the first time since the first drive of the game, Wake Forest only needed one play. On the first play from scrimmage, Hartman found Perry, who had a step on his defensive back, over the middle. After catching the ball at the Syracuse 30-yard line, Perry juked the defender twice and ran to glory. After missing the two-point conversion, Wake Forest had their largest lead of the game: 26-21.

Syracuse did not let their newfound deficit last for long. After Tucker ran for an 18-yard gain, Shrader followed with an 11-yard run of his own. Inside Wake Forest territory, Shrader passed for the first time on the drive, finding Courtney Jackson at the Demon Deacon 14-yard line. On the ensuing play, Tucker ran right up the middle for the touchdown.

The next three drives were unconvincing and all resulted in punts. On the fourth drive after the touchdown, looking to extend their lead, Syracuse pushed down the field to the Wake Forest 27-yard line. From there, kicker Andre Szmyt missed the 45-yarder, keeping the Syracuse lead at 27-26.

After the miss, Hartman relied on throwing the ball for the majority of the ensuing drive. His first three completions went to Roberson for a total of 35 yards. Then, after a Morin reception and a Beal-Smith run, Hartman found Roberson again to move into the redzone.

At the Orange 18-yard line, Hartman scampered twice for a total of eight yards. On third-and-two at the 10-yard line, Beal-Smith rushed through the line of scrimmage and kept his legs churning until he crossed the goal line. Up by five, Wake Forest went for two and succeeded on a completion to Roberson in the back of the endzone.

On the following drive, on first down, Cooper Lutz rushed down the sideline for a short gain. But, just before going out of bounds, the ball was wrestled out of the running back’s hands and into those of Wake Forest safety Ja’Sir Taylor.

With under three minutes remaining in the game and leading by seven, Wake Forest looked to run out the clock and go up by two possessions. They were unsuccessful on both objectives, as they were forced to punt the ball after chewing up just 21 seconds.

Looking to tie the game with a two-minute drill, Shrader took the game into his hands, rushing the ball for 39 yards into Wake Forest territory. At the 28-yard line, Shrader dumped the ball off to an open Tucker. With nothing but open field ahead of him, Tucker turned five yards into 28 and waltzed into the endzone to tie the game and force overtime.

After winning the coin toss, Wake Forest chose to play defense first in the extra period. The  Syracuse offense started strong, securing one first down. But, on third down in the second set of downs, Shrader was sacked, forcing a field goal.

With the ability to win the game on the next drive, Hartman answered the call. On the second play from scrimmage, he found A.T. Perry in the back of the endzone for the game-winning touchdown. The catch was reviewed and confirmed. Wake Forest survived.

After the game, Head Coach Dave Clawson was jubilant, as evidenced by a video of him cheering in the locker room and being carried on the shoulders of his players.

“I’m very thankful to God that I have such a wonderful group of players,” Clawson said. “I’m really proud of our team. I just thought we were resilient. I didn’t feel like today we necessarily had our fastball, but we kept hanging in there and making plays.”

Despite the win, Clawson also recognized there is much left to be written in this season’s story for Wake Forest.

“Our goal wasn’t to be 6-0,” Clawson said. “Our goal was to be a great football team and try to win a championship. I’m proud of where we’re at, but [I also]think this team has a lot bigger goals ahead of us than being 6-0.”

After their bye, the No. 16 Demon Deacons will look to extend their record to 7-0 against Army on Oct. 23.