College football provided a week for excitement, as Texas A&M upset No. 1 Alabama 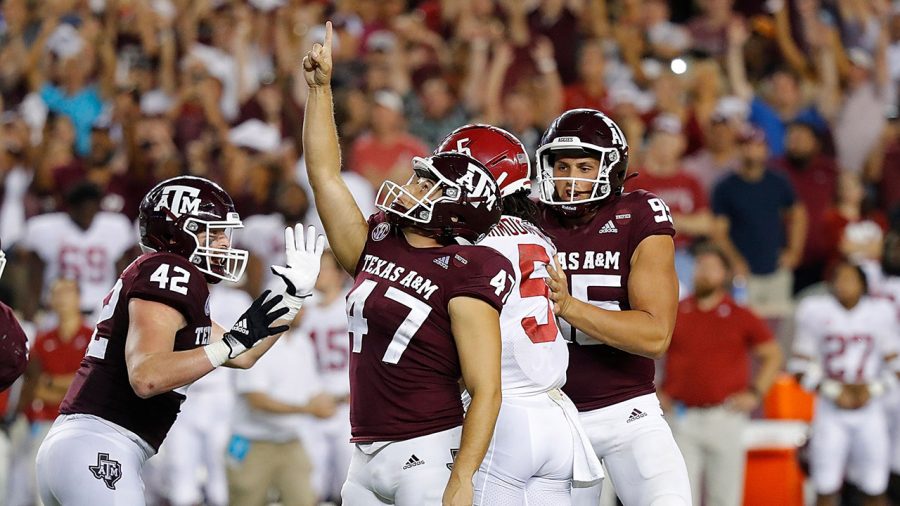 Week 6 in the college football realm featured several upsets, thrillers and blowouts, headlined by the Demon Deacons’ first 6-0 start since 1944 and 4-0 ACC record, their best ever. Aside from Wake Forest, history was made across the nation, as the Alabama Crimson Tide — the nation’s top dog — was dethroned in thrilling fashion. With an immaculate 51-game FBS slate, let’s take a deep dive into some of the week’s top results.

College Station — with 102,733 raucous fans in the stands — was rocking as the Aggies pulled off their biggest upset in program history. Entering the contest as 18.5 point underdogs and coming off a pair of tough losses against Arkansas and Mississippi State, Texas A&M looked to make a statement. They succeeded.

Texas A&M raced out to a strong start, ending the first quarter up 17-7 and later heading to halftime with a 24-10 lead. Quarterback Zach Calzada tossed a pair of touchdown passes in the opening half, on one to tight-end Jalen Wydermyer and the other to Ainias Smith. He would finish with 285 yards and three touchdowns.

The Crimson Tide stormed back late in the second half on a 21-0 run and took a 38-31 lead with just five minutes left in the game. The Aggies kept fighting, though. Calzada marched the offense down the field on two consecutive drives — each spanning two minutes — that resulted in a game-tying touchdown and a game-winning field goal off the boot of Seth Small.

Nick Saban’s former assistant, Jimbo Fisher, made a bold claim this spring that he would take down the Crimson Tide. It was the first time in 25 games that Saban would fall, and Alabama’s first loss to an unranked team since 2007. No better time than on Fisher’s 56th birthday and against the best team in the country, who hadn’t lost since 2019.

The most anticipated matchup of the week lived up to the hype in Iowa City. Penn State — winners of their first five games including a pair of ranked wins against Wisconsin and No. 19 Auburn — jumped out to a quick lead. A pair of rushing touchdowns from quarterback Sean Clifford and running back Noah Cain made the score 17-3 just minutes into the second quarter. The Nittany Lions lost Clifford, their senior quarterback, early on in the game off a big hit from Hawkeyes linebacker Jack Campbell.

Iowa quarterback Spencer Petras capped an 11-play, 60-yard drive with a touchdown throw to Charlie Jones. The toss cut the deficit to 17-10 heading into halftime. After trading field goals in the third quarter, the Hawkeyes would pull away. Petras led consecutive scoring drives in the fourth quarter, one that resulted in a field goal and the other, a 44-yard touchdown to wide receiver Nico Ragaini.

The defenses of both Big Ten teams showed up all night long. The two teams combined for three interceptions in the first quarter alone, and Penn State threw four on the night. Iowa now has forced 10 interceptions in its past two games, the second-most ever in a two-game span, according to ESPN. The Hawkeyes earned their 12th straight victory — this one the biggest since the 1985 battle between the nation’s two top-ranked teams, Iowa and Michigan — and continued their historic playoff push.

SEC West foes duked it out in a thriller for the ages. The game — which featured 1,287 total yards of offense — came down to a two-point conversion on the final play of the night. The highly anticipated shootout provided six lead changes.

It appeared that Ole Miss got the final dagger with just over a minute left. Rebels quarterback Matt Coral completed a 68-yard touchdown pass to Braylon Sanders after the Razorbacks tied the game at 45 just 15 seconds prior. As time expired, Arkansas quarterback KJ Jefferson found Warren Thompson in the back of the end zone to make the score even. Looking to walk out of Oxford and steal a win, Razorbacks coach Sam Pittman elected to go for two and failed.

Arguably the greatest edition of the Red River rivalry to date, fans had no idea who would come out on top until the final whistle blew. Texas looked unstoppable in the first quarter, scoring two touchdowns in the first two minutes and carrying a 28-7 lead into the second quarter. Oklahoma allowed its most first quarter points ever. But the Sooners — facing heavy criticism from fans after tight contests against unranked Nebraska, West Virginia and Kansas State — clawed their way back.

The ferocious comeback began with a 66-yard touchdown from quarterback Caleb Williams. He threw two more touchdowns to begin a wild fourth quarter and tie the game up at 41. Following a costly Longhorns fumble on the next drive, the Sooners cashed in on a Kennedy Brooks rushing touchdown to take their first lead of the contest.

Although Texas quarterback Casey Thompson tied the game up at 48 with just over a minute left to play, the Sooners had ample time to make history. Brooks once again ran in a touchdown — this time with just three seconds left. With that score, the Sooners completed the largest comeback the Red River showdown has ever seen.