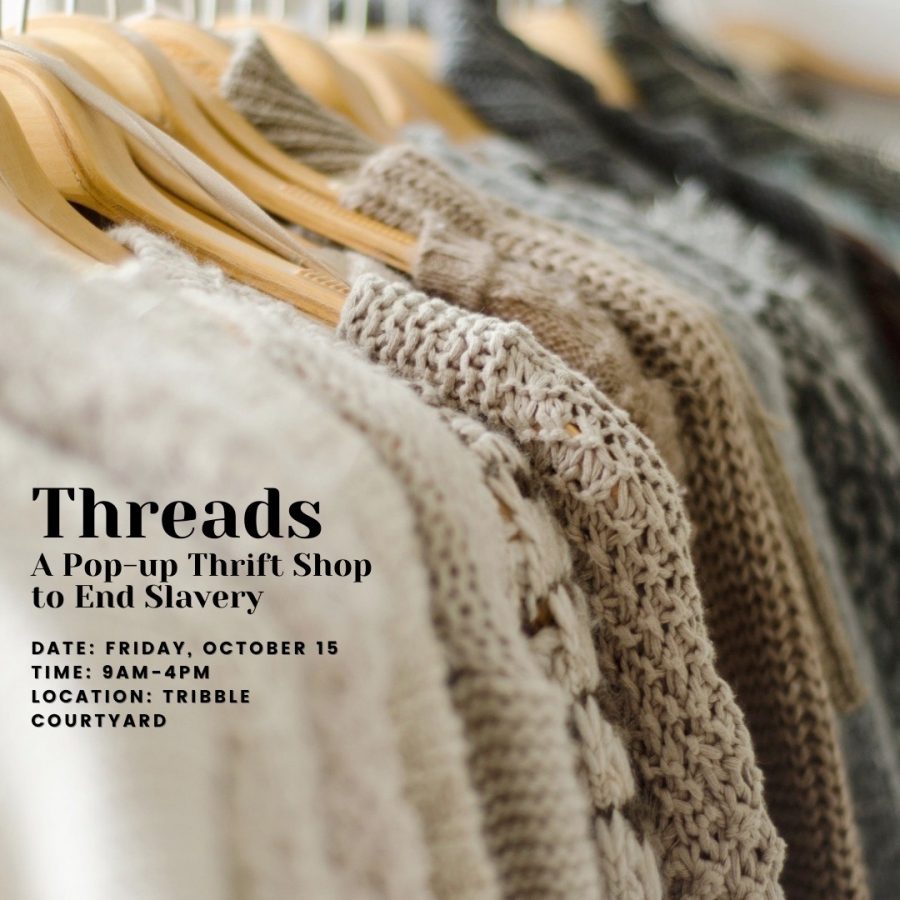 On Oct. 15, Wake Forest’s chapter of the International Justice Mission (IJM at WFU) will be hosting a pop-up thrift store, “Threads”, to raise money for rescue missions organized to free people from human trafficking.

The event will be held in Tribble Courtyard, and IJM at WFU encourages students to come shop from the racks of donated clothing, make a purchase and do their part to help end modern-day slavery. All proceeds from Friday’s event will go toward rescue missions in which the International Justice Mission parent organization physically removes individuals who are trapped in abusive or exploitative situations.

“What differentiates IJM from a purely advocacy-based organization is that IJM is responsible for conducting a series of ongoing rescue missions that go into the countries where victims are enslaved for purposes ranging from labor to sexual abuse and take the victims out of immediate danger and put them into rehabilitation programs,” said sophomore Skylar Dailey, IJM at WFU’s communications coordinator. “For any IJM fundraiser, the money goes towards supporting these efforts.”

The executive team of IJM at WFU is hoping to not only make lots of sales at Threads, but also to educate students on the horrors of modern-day slavery and IJM’s fight against them.

“I hope that Threads will provide a meaningful opportunity for students to learn about the mission of IJM: which is to combat modern-day slavery, sex trafficking, sexual violence and the abuse of power by police,” Dailey said.

Students can contribute to this event by donating clothing, spreading awareness or buying clothing.

The IJM at WFU executive team decided to host a Threads thrift shop event for two main reasons: First, a pop-up thrift shop engages the entire community by offering multiple ways to participate. Individuals can contribute to the cause by donating, volunteering or purchasing at the event. Secondly, a pop-up thrift shop also supports sustainability on campus. IJM at WFU decided to partner with the Office of Sustainability to organize this event because many human trafficking cases occur within the fast-fashion industry. By shopping second-hand at this event, one can support both the environment and IJM’s rescue efforts.

“More and more, we are enlightened about the dangers and evils that take place within the realm of fast fashion, which guarantees cheap prices for clothing at the expense of exploited laborers who are either paid minimally or not at all,” Dailey said.

She continued: “Thus, IJM — by conducting a pop-up thrift shop — is furthering the cause of moving away from an industry which has led to the exploitation of so many innocent people.”

IJM at WFU will be hosting many more events throughout the remainder of the school year. Another upcoming event this semester is “Skate for Freedom”, an outdoor event that will feature skating, games and pizza.

IJM at WFU is also looking to recruit new members.

“IJM is a cause which anyone, regardless of religious convictions — or lack thereof — can support and find purpose in supporting,” Dailey said. “The statistics around modern-day slavery and sex trafficking are devastating, and it is in the responsibility of those who are experiencing the freedom which these victims so deserve to advocate and to join the fight against the institutions which keep them enslaved.”