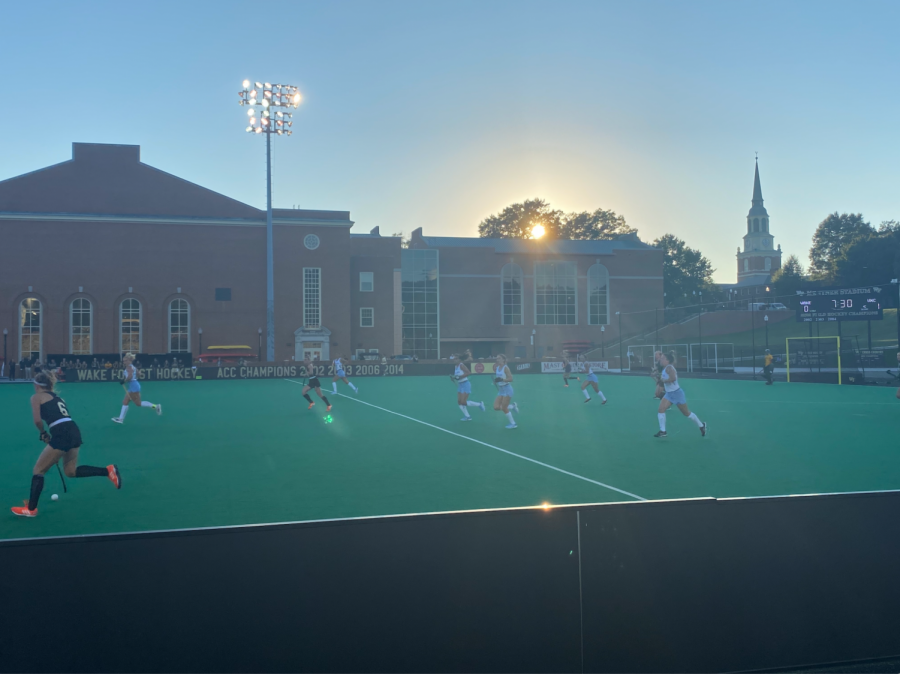 The sun setting on Kentner Stadium … and Wake’s chances of scoring a late equalizer in the game’s closing minutes.

CPR: “Character drives the process that gets you results.”

This mantra is among the many motivating acronyms, alliterations and rhymes that have aided Jen Averill in her illustrious 30-year, hall of fame career as the coach of Wake Forest field hockey.

It serves as a constant reminder that in a conference as competitive as the ACC (sporting 6 of the top 20 teams in the nation), talent is a given, but character is what distinguishes the good teams, from the ones that are playing on Sundays in November.

It is belief that propels these elite teams, and this belief breeds the quality that Averill most desperately seeks in her athletes: self-confidence.

In her game-week press conference this past Wednesday, Averill put this value into perspective: “Here’s the fact, I took teams to the final four that didn’t deserve to be in the final four … but when you have that belief it is self-propelling … you’re going to the final four, there is not a choice.”

For this season’s iteration of Wake Forest field hockey, the off-field chemistry is there, but the process of developing unwavering belief on the field is an ongoing one, and their most recent performance on Friday afternoon in Kentner stadium reiterated this fact.

As the sunshine continuously dimmed, so too did Wake’s self-confidence: leading to a gut-wrenching 1-0 defeat to their arch-rivals in Carolina blue (9-5). The home team fell to 5-7 on the season.

Far too often, Wake’s attackers could be seen making solo runs down the flank without the intention of spreading out the North Carolina defense with a timely pass. This allowed the opposition to run an effective high press and double and triple team Wake players caught with their eyes down.

These turnovers allowed UNC to capitalize on transitions into the attacking third, and ultimately, play a game of advanced keep-away for the majority of the second half, which Wake became increasingly passive in combatting.

Disappointed, but grounded as always Averill provided her interpretation: “Emotionally we let the highs run away, and the lows get us down. To see everybody’s body language during those timeouts …t hat to me is a controllable … and these controllables added to our dysfunction.”

Averill was spot on.

Wake players could frequently be seen with their heads down or their hands on their hips during brief stoppages. Their effort between the whistles was relentless and persistent, but to show any sign of weakness to a team of UNC’s caliber is like swimming in an ocean full of sharks with an open wound: they will smell blood.

This development was not only observable on the field, but it also played out in the stat sheet. North Carolina took more shots in the third and fourth quarters (seven and six, respectively) than Wake did in the entire first half (five). These opportunities came as a product of mounting pressure from a Tar Heels back line that found themselves playing exclusively in the opposing half in the game’s final 20 minutes.

Once all the dust settled, however, Wake found itself on the wrong side of a closely fought contest to a perennial powerhouse.  With that being said, and despite their dejected body language on Friday night, the game film will give them a lot of reasons to keep their heads up.

Wake goalkeeper, and Friday night standout Tori Glaister echoed this sentiment: “I think we are in a difficult position because we have been playing so well and we are not any worse than these teams we have been playing. We have been losing in double overtime and by strokes, but we can’t let that dictate our season.”

Glaister, almost single-handedly prevented the final score from reflecting UNC’s dominance: sliding diving and kicking her way to eight saves while anchoring a defense that successfully prevented all five of UNC’s penalty corners from finding the back of the net.

The product of London could continuously be seen clapping her hands and holding teammates accountable as the action played out: setting an example for the type of mentality that Averill is seeking from her players. However, in the post-game press conference, the sophomore spoke humbly, recognizing that no one player is bigger than the team.

With four games remaining in the season before postseason play – including three non-conference affairs – Wake has an opportunity to regain some much-needed confidence. That can make all the difference for a squad that has played four straight contests decided by a single goal.