Mark Robinson does not belong in a position of power 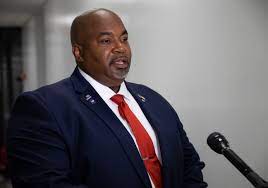 As a nation, we have certainly made significant strides towards equality for the LGBTQ+ community. In 2015, the U.S. government legalized same-sex marriage in all 50 states. The advent of Title IV adjudication has largely prohibited discrimination based on sexual orientation. Professors and teachers within the education system are asking for students’ pronouns at the beginning of the school semester. In fact, many elementary schools have begun to incorporate LGBTQ+ education into their curricula. These are just a few of the developments that allow LGBTQ+ members to feel protected and comfortable within their communities.

Books such as “Heather Has Two Mommies” and “Julián Is a Mermaid” inform children of same-sex marriage and transgender people. Of course, most children will not yet understand sexuality and gender to its full extent, but these curricula expose children to LGBTQ+ identities at an early age so that they are not raised with any negative biases or perceptions of those who may be different from them.

Although the progression that we have made as a society towards equality for the LGBTQ+ community is certainly important, a large population of homophobic people still exists. They believe that this community does not deserve equality, that their practices are sinful and that LGBTQ+ education has no place in the classroom. Perhaps the most alarming and disturbing display of this belief comes from those in positions of power, who have the capability to wrongfully educate a population.

Last week, a video from June 2021 of North Carolina’s lieutenant governor Mark Robinson resurfaced on Twitter after the group “Right Wing Watch” shared a clip of one of his speeches. In the clip, Robinson is making these comments at the Aspbury Church in Seagrove;

He continued by stating that Christians must take control of public schools because the teaching of this ‘filth’ abuses children.

There are no words to describe how disturbing, hateful and straight-up wrong these claims are. Even after facing widespread backlash, Robinson refused to apologize or back down from these degrading comments. His spokesperson claimed that his comments “refer to education” and that Robinson “will fight for and protect the rights of all citizens.” Clearly, these statements are sheer lies, as Robinson shared on his Facebook page that “Homosexuality is STILL an abominable sin and I WILL NOT join in ‘celebrating gay pride.’”

Let us not forget that Robinson holds the second-highest office in the state, that he would succeed Gov. Roy Cooper. There is absolutely no reason why someone as disrespectful and ignorant as Robinson should hold a position of power. The malicious nature of his comments reach far beyond just education. If he is given more direct influence and power, he most certainly would not protect the rights of all citizens.

It’s important to note that the separation of the church and the state has been a concept since the 19th century, ensuring that all citizens have the freedom to practice their own religion without the nation imposing a set of beliefs upon them. To claim that Christians must take control of public education is a violation of First Amendment rights to freedom of religion. While this is just one major flaw in Robinson’s claims, it is certainly not the most detrimental.

Robinson represents a form of backwards progression in society. He is attempting to erase the progress and steps we have taken to allow equality for everyone. It’s one thing to believe kids shouldn’t receive LGBTQ+ education in the classroom, but it’s an entirely different form of hatred to refer to such education as ‘filth.’

I believe that the progression we have made in educating kids on real-world issues and exposing them to different identities will allow us to grow into a society full of more well-rounded, accepting individuals. Even though Robinson may disagree, there is absolutely no excuse for his disparaging comments towards the LGBTQ+ community.

It’s terrifying to think what would happen if Robinson had become governor of the state, and it’s equally disheartening to wonder what backwards steps the government might take next regarding the LGBTQ+ community after Robinson’s statements.

There is no room for hate in any nation, state or local community — anyone who outwardly expresses such hate with no remorse should have a position of power. As a society, it is our job to protect our LGBTQ+ community members and to be active allies when we witness hate speech and direct prejudice. With that being said, we cannot stand by and allow Robinson to continue to spew fiery hate across this state.

Sign petitions, call the North Carolina government office and inform your friends of the divisive and hateful agenda that Robinson is pursuing. This man is no leader — he is an abominable divider.