Legislators prioritize partisanship over the wellbeing of Americans 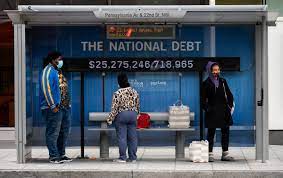 Over the past week, the U.S. House of Representatives approved temporarily raising the national debt limit to about $29 trillion, averting the threat of default for only another two months. This development came after Senate Republican Leader Mitch McConnell agreed to allow Democrats to pass an emergency extension of the debt limit without having to face a Republican filibuster. However, McConnell has not always been so adamant in maintaining the debt ceiling, and this recent crisis is indicative of the blatant political partisanship that currently plagues our government.

Just 12 days before the U.S. was set to default on its debt, McConnell offered Democrats this short-term solution, staving off a crisis at the eleventh hour. Nonetheless, he has made it abundantly clear that he will not assist them in raising the debt ceiling again.

“If Democrats want to tax, borrow and spend historic sums of money without our input, they’ll have to raise the debt limit without our help,” McConnell said.

The Senate Republicans’ attempts at painting their Democratic counterparts as inefficient and unable to manage the country’s finances due to this increase are not only laughable but hypocritical.

Over the course of former President Trump’s time in office, U.S. national debt rose by almost $8 trillion, amounting to the third-largest relative increase overseen by any U.S. president. Furthermore, the debt ceiling was increased by congressional vote 3 times. In addition to this, the national debt would have increased irrespective of which party won the 2020 general election due to the steep drop in GDP the U.S. suffered as a result of the coronavirus pandemic.

Now that Democrats control the legislative and executive branches of government, Republican politicians have dedicated themselves to making it as difficult as possible for Democrats to issue debt to pay off the country’s bills. They’ve done this in the hopes of being able to pin an economic crisis on the Biden administration.

The U.S. defaulting on its debt is likely to have disastrous effects. If the U.S. treasury is unable to issue sufficient funds to pay off the nation’s bills, they would be forced to conduct a warped form of economic triage in which they decide who to compensate and who to neglect. That could be soldiers anticipating their paychecks, the elderly who rely on social security benefits or other groups of citizens who depended on the government for their livelihood. Such would increase poverty nationwide.

Defaulting would also cause a sudden drop in the country’s credit rating, subsequently driving up interest rates for the average American, and undercutting both borrowing and spending. This, coupled with the inevitable devaluation of the dollar under these circumstances, would result in immense inflation, increasing the cost of living for the average American. Moreover, according to economic research company Moody’s analytics, this could even cause the unemployment of 6 million people, decimate $15 million worth of household wealth, and result in “a downturn that would be comparable to that suffered during the financial crisis” of 2008.

These are economic impacts that seem to be realized by most of the public, considering the fact that 58% of Americans support increasing the debt ceiling (survey conducted by Navigator). Hence, the unwillingness of Republican policymakers to cooperate with Democrats is indicative of a much more insidious perspective that seems to motivate many Republicans’ political stances and decisions.

This crusade, led by Senator Mitch McConnell, is the latest in a long line of demonstrations of apathy towards the middle and working class. Their willingness to jeopardize the livelihoods of the American people, to launch a smear campaign against the Democratic party, exhibits how partisanship and control have taken precedence over the wellbeing of the public.