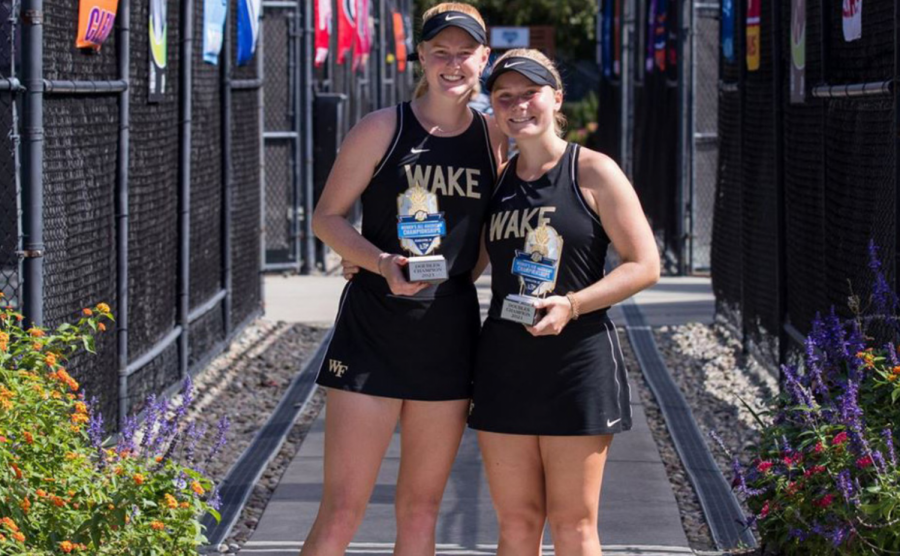 Brylin and Killingsworth defeated Old Dominion in the final match in three sets.

On Oct. 10, doubles team Brooke Killingworth and Anya Brylin made history as the first Demon Deacon doubles tennis team to win an ITA All-Americans Championship. Killingworth — a sophomore from Rogers, Ark. — and her partner Brylin — a senior from Short Hills, N.J. — entered the tournament ranked No. 8 nationally. The team took down Auburn’s No.19 ranked doubles team in the round of 32 before defeating Florida State’s No. 20 pair in the Round of 16.

Christina DeNovio: What made you want to pursue playing tennis at the collegiate level?

Brooke Killingsworth: I started playing tennis super young because I liked the clothes. But then, about my freshman year of high school, I knew that I wanted to pursue it at a higher level. College tennis is a lot different than junior tennis, but it’s still a lot of fun.

Anya Brylin: My parents just kind of put me into different things when I was younger, and as I got older, I started dropping more and more activities. Tennis, though, was always the one that I never dropped. I kind of liked being the only one controlling what happens in a match. As Brooke said, junior tennis is a lot different than college tennis and I’ve always wanted to be on a team, but obviously, tennis is not a team sport. So the fact that college tennis makes you work with people and lets you have teammates was something that attracted me. I’m thankful I was able to get here.

CD: How did you choose Wake Forest?

BK: I visited a lot of schools, a lot of big state schools. Wake was really special because it felt very community-driven. All of the girls on the team felt like a family. Walking around campus was really different than anywhere else I visited because so many people were waving to each other, so many people were saying ‘hi,’ it just felt like something I wanted to be a part of. There are small classes, but we also have big-time athletics and I knew that I’d get the opportunity to compete at a really high level.

AB: I knew that I wanted to go somewhere that had great academics and great athletics. I decided that I wanted to go to a smaller school, not a big state school. I wanted to be able to have close relationships with people and with my professors as well. Then, when I met the team and I met the coaches, I just loved the way that they interacted. Girls playing an individual sport could get very competitive sometimes, so I liked that the team was so close, but that everyone was able to push each other at the same time.

CD: How long have you been playing doubles with each other?

BK: We started at the beginning of the second semester last year. But, we weren’t supposed to play together originally. It was kind of an accident that this happened.

AB: Because of COVID last year, with people coming back at different times, they just put us together for the beginning of the season while trying to wait for everyone else to come back. That wasn’t their plan for when everyone else came back, but we just kind of clicked. We had great chemistry, started doing pretty well together, and they decided to keep us together. And, obviously, it’s worked out.

CD: Why do you think you make such a successful doubles pair?

BK: I’ve played a lot of doubles, but I think there’s something special between us. We really click. Anya and I don’t ever really disagree. We’re also really supportive of each other. Mistakes are going to happen because doubles is such a fast game, but I think that we’re very good at creating a really positive environment on the court. As such, we don’t often get upset or feel like we let each other down if we make a mistake.

AB: Yeah, I definitely agree. We are almost always thinking the same thing, which is nuts. And I think that also kind of comes from our relationship off the court. I love Brooke to death. She’s probably one of my closest friends here now.

CD: How did it feel to make history with your championship win?

BK: Our immediate reaction was pure joy. I don’t think we ever doubted that we could do it. It was just so exciting. It was such a team effort. Towards the end of that match, Andy, our assistant coach, came out and was like, “Okay, here’s what we’re gonna do.” He laid down the game plan, and it felt like something that we wouldn’t have been able to accomplish on our own. It was genuinely one of the coolest experiences of my tennis career.

AB: Immediately, when we won that last point, I was in disbelief. We did it. I couldn’t stop smiling for the rest of the day, my cheeks were hurting so badly. As Brooke said, we had confidence that we could do it because we believed in ourselves. Coach Jeffrey and Coach Andy were so supportive of us throughout the entire thing. They helped guide us through these tough moments and believed in our playmaking abilities. And the trust that went both ways.

CD: How did you prepare for the tournament?

BK: The tournament was on clay, which is really unique because college tennis is never on clay. Playing on clay is something that you don’t do a lot in America, so it’s something that Anya and I were a bit unfamiliar with. Moving on clay is really different. You have to learn to slide, how to be comfortable on your feet. The team out at Forsyth Country Club actually let us use their courts for two weeks leading up to All-Americans. We were out there learning how to slide, learning how to move. Doing that gave us so much confidence because we prepared as hard or harder than any of the other teams out there.

CD: Which match during the tournament did you feel the most pressure?

BK: I think that there was probably the most pressure on the semifinal match because we had gotten so far but we hadn’t gotten the ultimate end goal that we wanted. It was an NC State team, which is a big school. We know these girls really well and we know that they’re really good. This one felt like the most pressure because we were so close, yet so far, and there was such a good team standing in our way. But, I think the hardest match was the finals because those girls were very good and we had to go outside of our game and find a new level that we hadn’t previously played at.

AB: I also think the most pressure was in the semis matchup because we were playing NC State. It was at the point where we had been the first team in Wake Forest history to make the semis, so we wanted really badly to prove that we deserved to be there. I would say I felt tense and wound up and ready to go, which isn’t a bad thing. And then, in the finals, it was just tough because our opponents were on fire at the beginning of the match, and we had to find a way to turn it around. But, we knew that no matter what happened, this would be the last match. So, we just kind of left it all out there. We couldn’t sleep the night before the final.

CD: You ended up winning some sets after coming back from behind. What did it take to put together those comebacks?

AB: We were down in the semis and we were down in the finals, but we never gave up hope — we still believed that we could win. We kept telling each other to just focus on one point at a time, one game at a time. We had confidence in our abilities because we knew that we deserved to be there. We knew that if we kept working we’d find a way to come back and win the match. And as soon as we started gaining momentum, we never let go.

CD: What goals have you set for yourself for the rest of your time at Wake Forest?

BK: Next up is fall nationals — we’re hoping to go in as the No. 1 seed there. Really, we just want to keep winning. But then, as we move forward into the season, just kind of shifting out of that individual mindset and focusing on getting that doubles point for our team.

I know that we’re also looking forward to individual NCAA matches at the end of the year. Anya has always wanted to go skydiving — if we win in NCAA, it’s in August, we’re going skydiving. That feels a lot more terrifying now that I think that it’s a reasonable goal for us.

AB: We’re trying to replicate what we did down in Charleston, in San Diego. But then, as soon as the fall is over, we’re going to be gearing up for the team season. We’re going to be trying to give our team the best opportunity to win that doubles point and get ahead in every single match.

I think that we have a great chance to have a really good year this season as a team. I think we’re going to be really strong in so many positions. We’ll keep up this good work, and hopefully, go skydiving in May.