The Baltimore Ravens made a statement against the L.A. Chargers with a blowout win 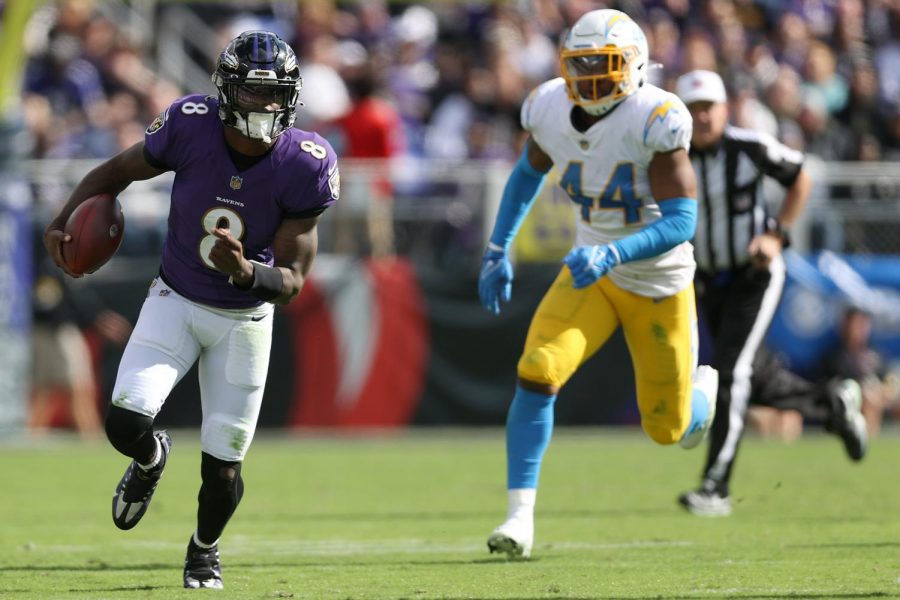 Week 6 of the 2021 NFL season was tumultuous to say the least. This season continues to provide compelling storylines and entertainment, as players keep showing out each and every week. However, despite all of these positives, many big plays were overshadowed by controversies.

Following the conclusion of Week 5, problematic emails written by Raiders Head Coach Jon Gruden came to light. In these emails, Gruden casually used misogynistic, racist and homophobic slurs. On Oct. 11, Gruden resigned from his post. The NFL will continue to investigate further. The league has made public denouncements of racism and sexism.

The one takeaway from this game is, despite losing key players, the Bucs are still a force to be reckoned with. The 44-year-old Bucs QB Tom Brady remained calm in the pocket despite nursing an injured thumb.

Tampa Bay came out firing, and the Eagles seemingly played catch-up the whole time. Jalen Hurts continues to struggle in his sophomore stint with the Eagles, and with the departure of TE Zach Ertz to Arizona, Philly fans are likely in for a rough year.

As the Bucs continue to rack up wins and injuries, it will be interesting to see if their depth will hold up. Will the backups be able to hold their own until Brady’s favorite target, Rob Gronkowski, returns?

The Jaguars were able to claw back from an early deficit and beat the Dolphins all the way across the pond in London. Tua Tagovailoa made his first start since Week 2, but the real star was Jaguars kicker Matthew Wright.

Playing in just his third game for the Jags, the former software engineer displayed nerves of steel, drilling two decisive kicks to ensure the win, including a clutch 54-yard field goal to tie the game late in the fourth quarter. Following the Dolphins failed conversion on 4th-and-1, the Jags regained possession and Wright hit a 53-yard walk-off.

It was the Jaguars’ first victory in 399 days, ending the second-longest losing streak in NFL history. It wasn’t pretty, but both Urban Meyer and Trevor Lawrence got their first NFL win. Hopefully, they can carry this momentum and salvage some part of their season.

“I still own you! I still own you!” Green Bay Packers QB Aaron Rodgers directed these fighting words towards the Chicago stands during his efficient performance this past Sunday.

Rodgers threw for two touchdowns and ran one in to secure the victory for the Packers. For Bears rookie quarterback Justin Fields, the learning curve is still apparent. He struggled to hit open receivers and constantly searched down field for the big play instead of making the easy one.

It was by no means a statement win for Rodgers and the Packers, but it has them sitting pretty atop the NFC North with a two-game lead over Chicago.

The pride of the AFC — the Kansas City Chiefs — has shown some weakness recently, and Sunday’s contest against the Washington Football Team was no exception.

Patrick Mahomes seems to still be battling his demons, as he threw two interceptions. Yet, Washington was not able to capitalize on these mistakes. The Kansas City offense woke up in the second half, and fans were treated to some glimpses of the Mahomes they know and love.

While the season is young, the time is now to turn the tide for the Chiefs. Mahomes and Kansas City need to iron out many of their mistakes if they want to salvage the season and return to the postseason.

The Chargers have been the golden child of the league for weeks now, but this Sunday, they were brought back down to earth. Touted as what would be a thrilling, high-scoring matchup, the passing game ended up lacking on both sides.

The Ravens are a running team, and this allowed for gaps in possession and led them to dominate the game from start to finish.

The MVP hopeful, Chargers QB Justin Herbert, struggled under pressure and was shut down by the Ravens defense. While Lamar Jackson threw two interceptions, the Ravens, as a whole, played complementary football and dominated nearly every aspect of the game.

This was clearly a statement win, and the Ravens will be looking to carry this momentum and continue their ascent to the top of the AFC.

The Cardinals remained undefeated with a commanding 37-14 victory over the Cleveland Browns, improving to 6-0 on the season. Kyler Murray threw for four touchdowns as the Browns battled injuries. Quarterback Baker Mayfield dislocated his left shoulder and will not play in their Thursday night game. Despite the absence of Head Coach Kliff Kingsbury and linebacker Chandler Jones due to COVID-19 protocol, the Cardinals were resilient and continued their unbeaten run.

Are the Cowboys a threat? It appears so, as they overcame the New England Patriots in an overtime thriller. Dak Prescott, on his comeback tour, threw for three touchdowns, including the walk-off winner to CeeDee Lamb in OT.

Trevon Diggs made his seventh interception in six games, a pick-six. Mac Jones threw a 75-yard touchdown the next play to regain the lead. The Cowboys marched down and kicked the field goal to force OT, and then walked it off. America’s team finally could be a contender.