Wake Forest students can turn on the T.V. any given Sunday and find several starring alumni 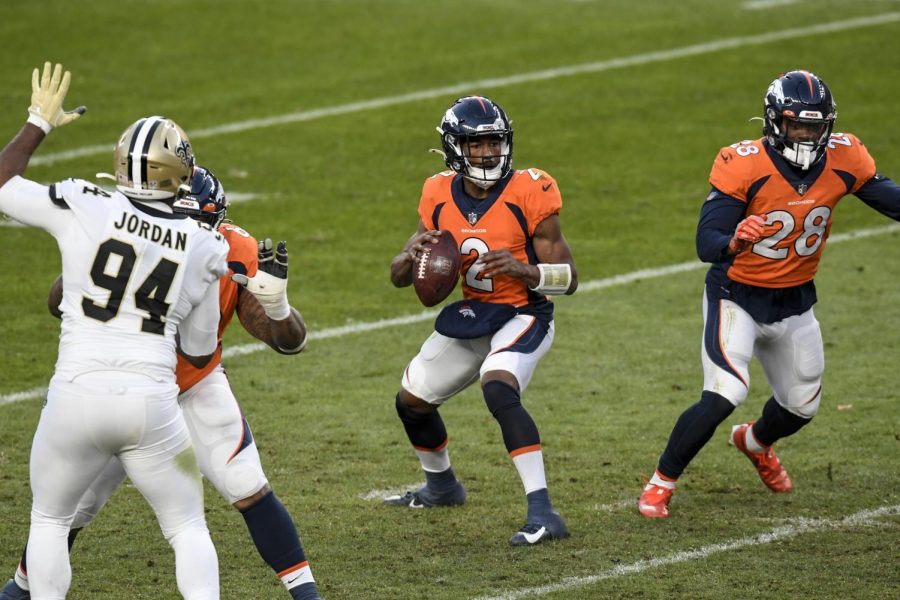 Kendall Hinton has had quite a noteworthy start to his career. After being signed as an undrafted free agent in 2020 by the Denver Broncos, Hinton probably did not plan on having a display in the Pro Football Hall of Fame already established. Then again, there are a lot of things we could not have anticipated due to the onset of COVID-19.

Hinton, a former college quarterback who transitioned to wide receiver during his senior year here at Wake Forest, famously started a game last season against the New Orleans Saints at quarterback for the Broncos when their quarterback was sidelined due to COVID-19.

Since his start last season at quarterback, Hinton has struggled to find his way onto the field for the 2021 Denver Broncos as a wide receiver. However, he may have finally caught his big break.

Since highly-touted Broncos receiver Jerry Jeudy hit the injured reserve list after their Sept. 12 opening game, the Broncos have been seeking a replacement for Jeudy’s production, and Hinton may be their solution. Hinton was promoted to the Broncos’ active roster from their practice squad on Sept. 14, and has since played in all five games for the team.

Just recently, however, he has seen an uptick in his on-field snap percentage. In the Broncos’ Oct. 10 outing against the Pittsburgh Steelers, Hinton not only played on a career-high 65% of their offensive snaps as a receiver, but also snagged his first career touchdown reception on a two-yard route in the end zone.

Moreover, while the Broncos have dropped their last three games after starting 3-0, Hinton’s role in the offense has continued to expand. He caught all five of his targets against the division rival Las Vegas Raiders this past Sunday. It seems like Hinton’s role will only grow in the coming weeks with the struggling Broncos offense.

Strnad is a former Wake Forest standout linebacker who received Honorable Mention All-ACC Honors and an invite to the 2020 Senior Bowl. Strnad rebounded from a season-ending injury, earning himself a starting inside linebacker role for the 2021 Denver Broncos. Through six games, Strnad has tallied 23 tackles for a Broncos defensive unit that currently ranks fourth in both total yards allowed per game and total points allowed per game. Strnad and the Broncos will look to bounce back after three consecutive losses, as he and fellow former Deac Kendall Hinton seek to keep the Broncos’ playoff hopes alive in a highly competitive AFC West Division.

Death, taxes and Jessie Bates being an elite defender in the Bengals much-improved secondary. These are the only certainties in life.

Bates has been, as per usual, a standout on the Bengals’ defense. The former All-ACC Second Team Selection and No. 54 overall pick in the 2018 draft is living up to his hype after earning second-team All-Pro honors in the 2020 season. Although his numbers are not on track to match his outstanding 2020 season, Bates is still ranked as PFF’s 15th best safety, receiving a defensive grade of 71.2.

Bates has totaled 35 tackles this season, and has yet to miss a game as a starter for the Bengals during his career. Bates is also due for a large contract extension after this season when his rookie deal expires. If Bates continues to improve his stats this year — and is able to force a few turnovers — he should expect an offer that matches that of All-Pro safety Budda Baker or Steelers free safety Minkah Fitzpatrick.

Currently, the Bengals defense ranks fifth with 111 points allowed this season, and the team sits second place in the AFC North with a 4-2 record. While this Bengals team may be surprising pundits who previously condemned them up to another year of tough losses, Bates’ continued success should not surprise anybody.

A member of the highest-ranked defense in the NFL in terms of points and yards allowed, 2021 second-round pick and former Demon Deacon standout Carlos “Boogie” Basham has started to emerge.

Being thrown more and more into a stacked front seven rotation, Basham has racked up five tackles and 1.5 sacks in two games this season. Basham’s rookie year with the Bills is bound to result in an expanded pass-rushing role as the season progresses, so long as he can stay healthy.

Basham may play himself into a starting position by the beginning of next season. For now, he, alongside the rest of the Bills roster, seeks to get back to the AFC Championship Game and advance to the Super Bowl for the first time since losing four-straight Super Bowls with Jim Kelley and the K-Gun offense in the early ’90s. Basham and the Bills fell to the Titans on Monday night.