Iowa, the No. 2 team in the nation and CFP hopeful, was blown out by Purdue 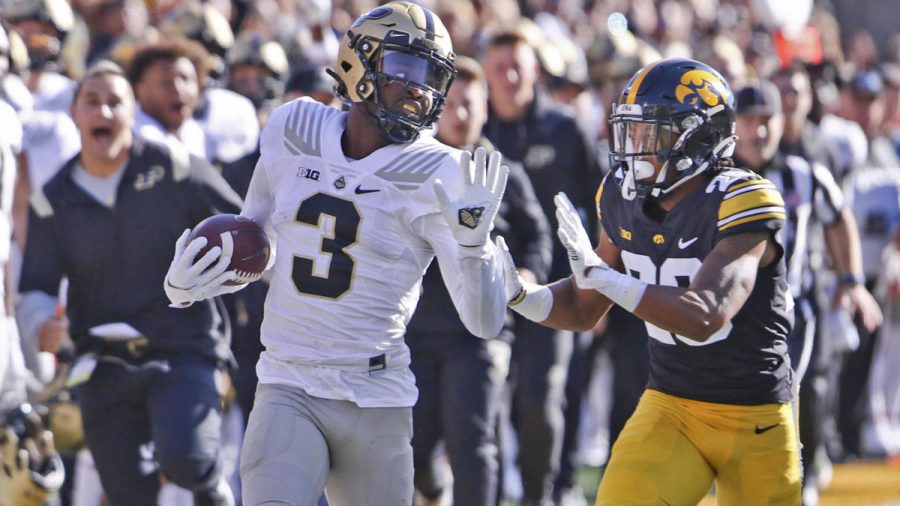 Week 7 in college football saw traditional playoff contenders assert their dominance, while some powerhouses fell victim to unranked teams. With under a month until the selection committee reveals their ranking, and six undefeated Power 5 teams occupying the AP poll, no team can afford to slip up if they want to lift that shiny trophy in 2022.

In the most anticipated game of the weekend that featured two undefeated SEC teams, the Bulldogs kept on rolling.

Georgia controlled both sides of the ball and time of possession, much to the delight of a packed house in Athens. Backup quarterback Stetson Bennett continued to be serviceable in relief for starter JT Daniels, tossing for 250 yards and three touchdowns on an efficient 14/20 passing. In addition, coach Kirby Smart spread out rushing attempts between five different players en route to 166 yards and a 6.1 yard average per carry, keeping an overmatched Wildcat defense on their toes all game.

Ultimately, Georgia doubled down on the formula that enabled them to ascend to the top of the polls, and they have all the makings of a national championship contender come December. Their most significant remaining regular-season test looms next week when they host a familiar SEC East foe in the unranked Florida Gators.

Meanwhile, Kentucky will look to get its historical season back on track. They have no ranked matchups remaining on their schedule. Expect to see both of these talented squads duking it out in one of the New Year’s Six bowls in the postseason.

In by far the biggest upset of the weekend, Purdue suffocated the second-ranked team in the nation on the road in a game in which the hosts appeared truly outmatched throughout all four quarters. Purdue quarterback Aidan O’Connell had a field day through the air, completing 75% of his 40 passes en route to a 375-yard, two-touchdown performance. O’Connell had plenty of help out wide, as 240 of these yards were accounted for by standout receiver David Bell, whose touchdown early in the fourth quarter served as the final score for either team and essentially put the contest out of reach.

Iowa’s defense, which entered the contest leading the nation in turnovers and turnover margin, nabbed a single interception in the third quarter and fell victim to some serious fatigue. Iowa quarterback Spencer Petras threw four interceptions and no touchdowns, forcing his defense to operate under short rest time and time again.

Despite falling victim to one of the biggest upsets of the season, the path to the postseason remains the same for the Hawkeyes: win and you’re in. Meanwhile, Purdue is sure to provide sleepless nights for Big Ten contenders in the coming weeks, as they enter the most recent AP poll ranked No. 25.

A game that was billed as a “homecoming” for former Tennessee and current Mississippi coach Lane Kiffin turned sour in the moments leading up to the final whistle. Following a controversial call late in the fourth quarter that stymied a game-winning drive for Tennessee, a sold-out Neyland stadium revolted in a scene that will be discussed for years to come. Trash, beer bottles, and golf balls were hurled onto the turf in protest. Some fans targeted their former coach in particular.

The incident led to a 20-minute delay in game action and overshadowed what was likely the week’s most thrilling contest. Heisman contender Matt Corral struggled to put together an efficient performance for the visitors, going 21/38 through the air and throwing for two touchdowns. It was the Ole Miss defense that instead anchored their victory. During the game, their traditionally high-powered offense managed to score only a single touchdown in the second half.

Despite the chaotic ending, this contest demonstrated the depth of the SEC this year. The game also reminded fans just how much better college football is when these two teams are an essential part of the landscape.

Following a colossal 37-34 road upset for LSU in 2020 over their arch-rivals, the Tigers put on a repeat performance in Death Valley this past Saturday. Yet again, the game had no shortage of highlights and exciting moments.

The story of the game was undoubtedly LSU’s rushing offense, which totaled 321 yards on the ground, including a program-record 287 from lead back Tyrion Davis-Price, in addition to three touchdowns. LSU quarterback Max Johnson held up his end of the bargain as well, going 14/24 and tossing three touchdowns through the air.

In the dying moments of the half, with LSU leading 21-6, Florida quarterback Emory Jones completed a miracle 42-yard Hail Mary to receiver Justin Shorter, giving the Gators hope once more. The visitors went on to score 29 points in the second half behind a dual-QB system. Emory Jones and Anthony Richardson threw the ball 10 and 12 times, respectively.

The Tigers matched their foes every step of the way, sealing the deal with a go-ahead Max Johnson touchdown pass to receiver Jaray Jenkins with roughly three minutes remaining in the third quarter. Richardson went on to get intercepted on the following possession, effectively icing the game.