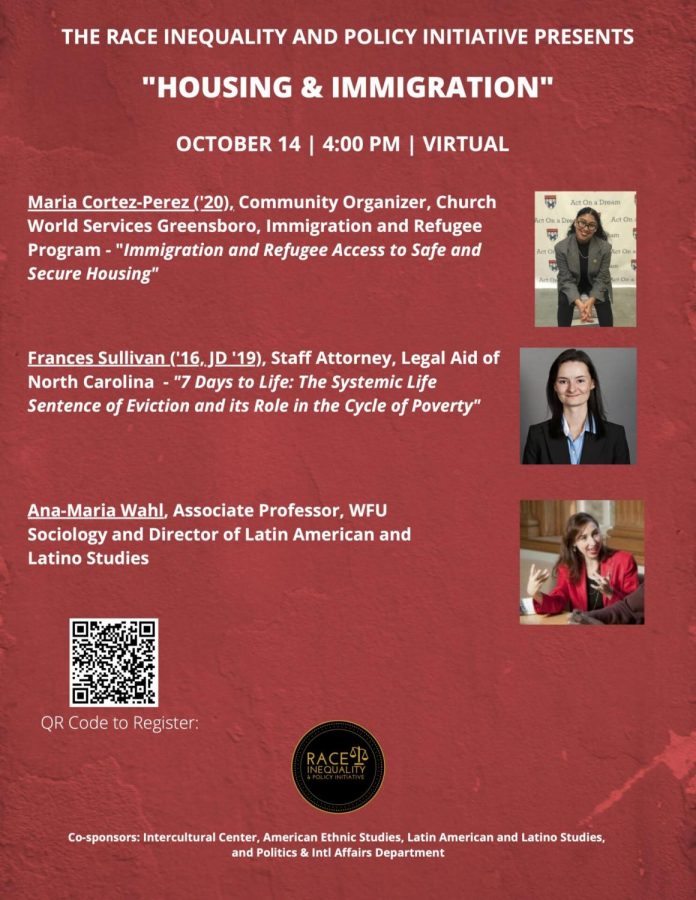 On Thursday, Oct. 14, the Race, Inequality, and Policy Initiative (RIPI) hosted the second event of their three-part housing speaker series, a talk on immigration and housing policies.

This most recent panel featured two Wake Forest alumnae and Sociology Professor Dr. Ana-Maria Wahl.  The discussion focused on the obstacles that immigrant communities face regarding housing access and the discrimination they are subjected to by landlords and property managers.

The crux of the talk was summed up by RIPI Committee Leader Dr. Alessandra Von Burg, who said that one “cannot be an immigration advocate without being a housing advocate.”

The first panelist, alumna Maria Cortez-Perez, graduated from Wake Forest in 2020 with a degree in sociology.  She now works as a community organizer for Church World Service (CWS), an international refugee resettlement agency. Cortez, therefore, is in a unique position that gives her insight into the housing challenges faced by immigrant communities.

The next panelist, alumna Frances Sullivan, centered her discussion around the practice of summary ejectment, North Carolina’s eviction process.  As a Wake Forest Law School graduate now working as a housing attorney at Legal Aid in Winston-Salem, Sullivan is well acquainted with the housing system and its regulations.

Cortez shared a story about one immigrant family that used CWS who went almost two months without electricity due to a miscommunication with their internet provider.

“This becomes a very stressful situation for our families, because they face a lack of English proficiency and a lack of technological literacy,” Cortez said.

For summary ejection to occur, a landlord must file a complaint, and the tenant then receives a summons to court requiring that they show up within seven days of the notification.

“Summary ejections are not really easy to read about or understand,” Sullivan said. “So when we’re talking about communities that have all these barriers, you can imagine how it feels when you get served a summons.”

Another disadvantage for immigrants is present in the enforcement of the eviction moratorium implemented due to the pandemic.  While the practice supposedly banned evictions, landlords could still file cases against tenants, and the defendants needed to actively invoke the moratorium in order to be protected by it.  If a refugee individual or family were unaware of the moratorium, they could still be ejected.

Cortez explained many instances of discrimination reported by case managers, including landlords’ claims that the tenants “leave a strong smell behind in units,” or “do not pay rent in time.”

One more specific instance of such discrimination occurred when a family hosted a baby shower on their rental property in which they killed a turkey, a common custom within Hispanic communities.

“The neighbors complained and reported it to the property managers, and they were asked to vacate the apartment in 30 days, even though this family had never missed a payment or had any late fees,” Cortez said.

When the case manager became involved in the situation, they discovered that the immigrant family had already filed complaints against these very neighbors surrounding marijuana usage. The landlord was unresponsive to those calls, though. Cortez calls this “lack of cultural sensitivity” a common occurrence amongst landlords in their dealings with refugee tenants.

Wahl went into detail about the history of discrimination against immigrants and refugees in the struggle for housing.  She explained the racialized anti-immigrant sentiment that spread in the 19th Century, the establishment of “ethnic enclaves,” and gateway cities.  She also described restrictive covenants written into property deeds, redlining, and numerous other laws or policies that prevented immigrants, especially immigrants of color, from obtaining fair housing.

The third and final event of the series will take place virtually on Nov. 4 at 4 p.m. It is an opportunity for any student to get involved and learn from highly qualified speakers about these issues.