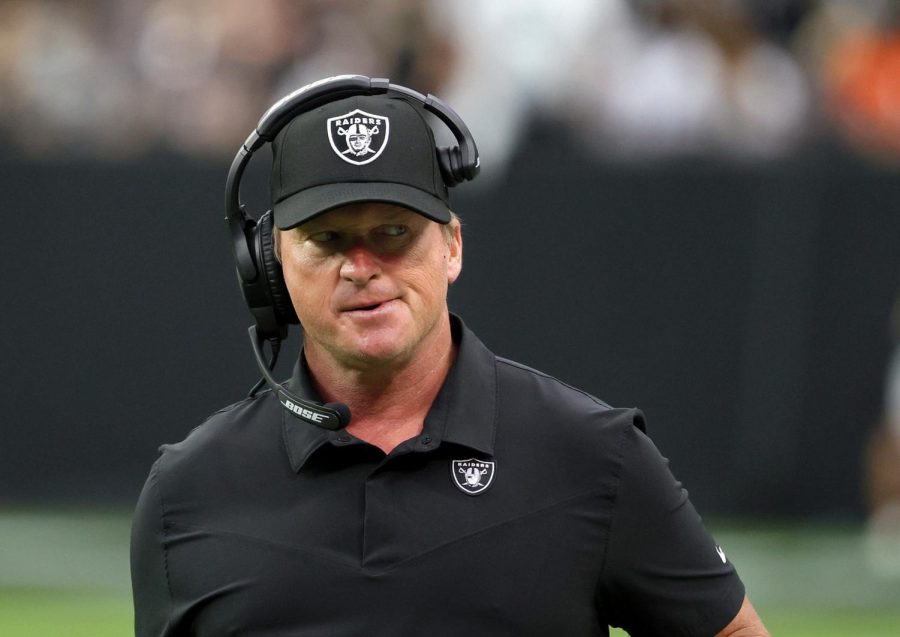 Following the exposure of a series of obscene emails, Jon Gruden has resigned from his position as head coach of the Las Vegas Raiders. The team had been in the midst of an impressive opening to the 2021 season — starting 3-0 for the first time since 2002 — when Gruden’s first controversial emails came to light on Oct. 8.

As reported by the Wall Street Journal, Gruden used a racist trope in an attempt to express frustration with the executive director of the National Football League Players Association (NFLPA), DeMaurice Smith in 2011.

“Dumboriss Smith has lips the size of Michelin tires,” Gruden wrote to Bruce Allen, who was the president of the team now known as the Washington Football Team.

Upon its publication, Gruden’s email and racial stereotyping enraged the general public. Even with a decade distancing Gruden from this insensitive remark, the email necessitated an explanation as fans questioned whether or not he deserved to represent the football team going forward.

Gruden claimed that he has always referred to people as “rubber lipped” if he felt they were prone to spinning lies. He explained that he felt Smith was being facetious during negotiations between the league and the NFLPA when he made the comment in 2011. He also acknowledged that the comment was inappropriate.

In response, Smith stated: “Racism like this comes from the fact that I’m at the same table as they are and they don’t think someone who looks like me belongs.”

DeMaurice Smith still serves as executive director of the NFLPA, giving his public statement all the more weight. He didn’t accept Gruden’s explanation. In fact,  it would be naïve to say many people affiliated with the league did.

Nevertheless, Jon Gruden was still on the sidelines of Allegiant Stadium on Oct. 10 to coach his team against the Chicago Bears. The Raiders went on to lose in disappointing fashion, not finding the end zone until the fourth quarter. The 20-9 defeat brought their record down to 3-2 and convinced fans that their team seemed distracted.

As of that day, the entire league was keeping a close eye on the organization. The Raiders’ front office had still not handed down any punishment upon the head coach.

Soon thereafter, a slew — seven years worth — of other heinous emails were exposed.

On Monday, Oct. 11, the investigation that had discovered Gruden’s first degrading comment about Smith brought numerous emails sent by the coach between 2011 and 2018 to the league’s attention.

In those emails, Gruden had used homophobic slurs to describe NFL commissioner Roger Goodell on multiple instances. In a 2014 email Gruden stated that the commissioner had somehow coerced Jeff Fisher, then coach of the St. Louis Rams, into drafting Michael Sam, who had become the first openly gay player to reach the NFL. Gruden also referred to gay players as “queers.”

While he was the first to be drafted, Michael Sam would not be the first openly gay player to make an active NFL roster. Carl Nassib would be that player. He currently plays for the Las Vegas Raiders, formerly under Jon Gruden.

In other emails, Gruden criticized the introduction of female referees, a progressive step the NFL took in 2015.

Gruden’s demeaning attitude toward women presents itself in other emails as well. He had, on more than one occasion, been included in an email chain that shared pictures of topless women. One such email included two Washington Football Team cheerleaders.

Compounded with the first email and its use of a racist trope, these new reports of Gruden’s derogatory behavior throughout the last decade put critical pressure on the Raiders ownership to dismiss their coach. However, Gruden himself stepped down on the same Monday that the rest of the emails were released.

“I have resigned as Head Coach of the Las Vegas Raiders. I love the Raiders and do not want to be a distraction. Thank you to all the players, coaches, staff, and fans of Raider Nation. I’m sorry, I never meant to hurt anyone.”

Thus, the Gruden era ends just four years into the 10-year contract the coach had originally signed with the Raiders. Inheriting the team is the assistant head coach, Rich Bisaccia, who has been employed by the Raiders since 2018.

Since becoming interim head coach, Bisaccia has led his squad to two decisive wins over the Broncos and Eagles. The Raiders enjoy a bye during Week 8 and will next test their resilience against the Giants on Nov. 7.