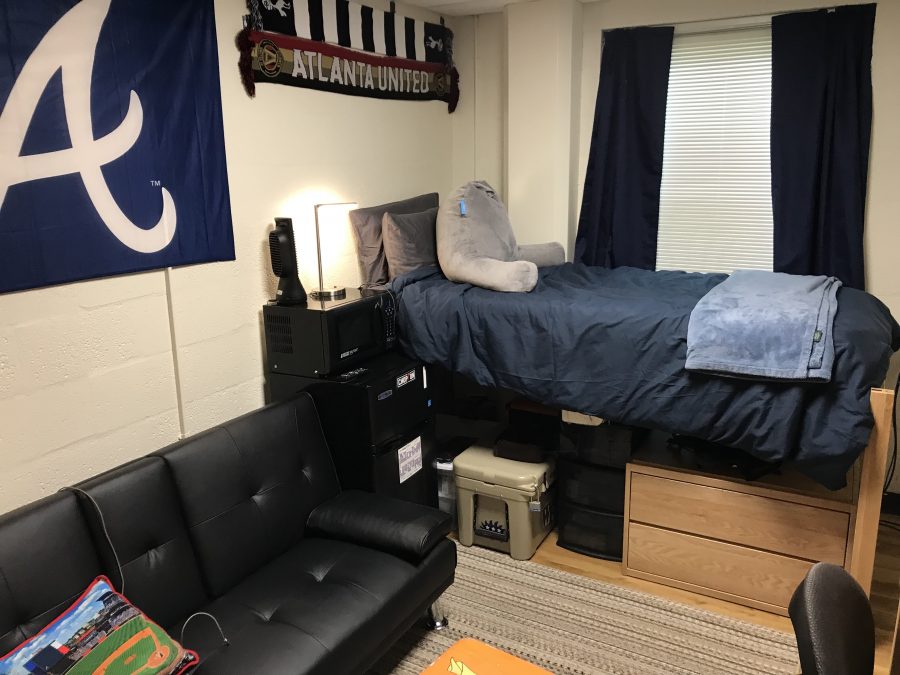 Ciambrone, a sophomore, has made a close-knit group of friends despite having a freshmen year plagued by the challenges of the COVID-19 pandemic. Now, with reduced restrictions, she and her friends can live together in a more open and freer environment.

However, Ciambrone’s plan to live with her friends for the next three years has been halted due to the four-year on-campus residency requirement imposed upon merit-based scholarship students.

“At first, I was totally fine with the four-year residency requirement,” says Ciambrone. “Living off campus wasn’t really a thought for me as an incoming freshman.”

But with many of her peers wanting to live off campus their senior year, Ciambrone is concerned about her senior year living options.

“All or most of my friends want to live off campus and have started signing leases for houses,” said Ciambrone. “It leaves me feeling bereft of an opportunity to keep these connections that I have built over my time at Wake Forest.”

Ciambrone is far from the only student who is locked into a four-year on campus housing plan due to their scholarship.

About 2,539 Wake Forest undergraduate students receive grant or scholarship aid. This amounts to about $96.17 million total — an average of $37,880 per student, according to the Wake Forest Financial Aid website.

But it is important to be aware of the distinction between financial aid and merit-based aid when it comes to housing restrictions. According to the Office of Financial Aid, Wake Forest offers named, merit-based scholarships to less than 3 percent of first-year applicants, or about 42 out of 1,400 members of the class of 2025.

Need-based financial aid, on the other hand, is awarded by the government via Pell Grants, work-study and subsidized direct student loans, while merit-based financial aid is issued directly by colleges. It is in this distinction where Wake Forest students’ on-or-off-campus living situations are spelled out.

“The rationale for the requirement is that we offer our merit scholarships to students whom we expect to contribute in significant and meaningful ways to our campus community through their various talents: in the classroom, in our clubs and organizations and to other members of the student body,” Director of Wake Forest Scholars Program Jackie Sheridan said.

With approximately 160 named merit scholarships awarded to students, approximately 85 of these are dedicated to needy or first-generation recipients.

A basic Google search and access to a calculator showcases just how large of a difference there is in paying for on-campus versus off-campus housing.

For example, a three-bedroom apartment in Crown Park — an apartment property that was partially subsidized by Wake Forest Housing during the 2020-21 school year — costs $1,685 to rent each month, or $561 per roommate. For the eight or nine months that this home would be occupied, the rent would come out to $5,049 per student.

But, when these exact Crown Park rooms were rented directly through the University, the cost was $6,216 per student per semester. This means that for a student on a named scholarship who is required to abide by a four-year housing contract would be forced to pay Wake Forest Resident life and Housing prices rather than Crown Park’s independent renter pricing. In other words, they would potentially pay twice as much for the same amenities.

Resident Advisor and senior JT Owens understands first-hand what this difference in housing prices looks like. This year, Owens is serving as an RA in Deacon Station. Last year, Deacon Station independently housed Wake Forest students who were able to live off campus. This year, however, the University has sponsored several townhomes.

“It’s funny, because there are a few houses of people who extended their lease from last year and are paying half of what Wake-sponsored kids are paying,” Owens said. “Living off-campus as a senior is part of the Wake Forest experience. It is part of getting you ready for the ‘real world’, and everyone should have the chance to experience it.”

Like Owens said, the issue of a four-year housing requirement for needy students is messy and convoluted.

While named scholarship students who are locked into four-year housing requirements have always had the option to petition to live off campus, most of these petitions were denied. That was, until COVID-19.

The pandemic put a temporary pause on this four-year housing requirement for scholarship recipients, and an email sent from the Scholars Office on Oct. 12 states that fourth-year students of the class of 2023 who wish to live off-campus during the 2022-23 academic year do not need to petition or inform the Scholarship Committee of their decision to do so.

So, for the second year in a row, the housing requirement for named scholarship recipients has been relaxed.

But relaxed does not mean retired.

Sheridan was hired in the second half of last year when some of these generalized exemptions were already in place because of COVID-19.

“We’ve asked more of our Scholars receiving full-tuition scholarships than those on smaller scholarships [throughout the pandemic]: they have been required to live on-campus,” Sheridan explained.

The Scholars Office’s Oct. 12 email also stated that no further decisions have been made regarding potential exemptions for the class of 2024, 2025 and onward.

Matt Clifford, assistant vice president for Campus Life and Dean of Residence Life and Housing, echoes that Wake Forest does not anticipate that university-sponsored, off-campus housing will be a necessity next year. This shift back to pre-COVID housing structures may signify a return to stricter fulfillment of housing requirements.

For many scholarship students, including Ciambrone, the housing requirement has little to do with the physical campus housing and more to do with the living environment.

“It’s more the fact that so many of my friends are living off campus that makes this an issue for me,” Ciambrone said. “I feel like we are encouraged to make friends and build these communities just to have it taken away from us senior year when we want to be together the most.”

But not all scholarship recipients are opposed to living on campus all four years.

Sophomore Marilla Morrison answered the phone with glee when called to ask her thoughts on being locked into a four-year, on-campus living requirement.

“Personally, I am just glad to have guaranteed housing and my scholarships,” Morrison said. “Though housing isn’t technically covered by my scholarship, it is nice to have a given. To have to go through the process of renting through another party and sign a lease once a year would be too much.”