The beloved and influential theatre professor passed away Oct. 20 at the age of 88 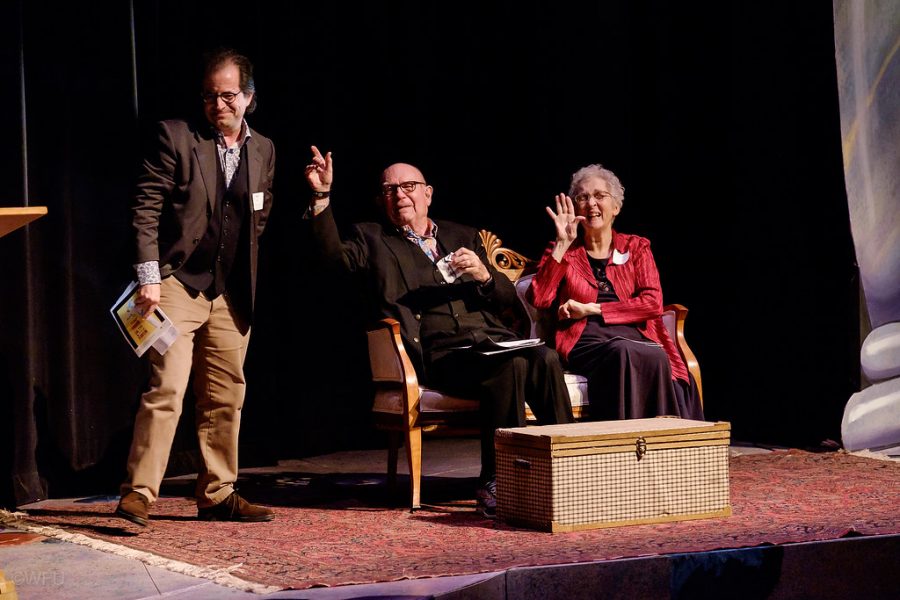 Professor Emeritus Harold Tedford poses on the stage in Scales Fine Arts Center that now bears his name. The beloved theatre professor passed away on Oct. 20.

Professor Emeritus of Theater Harold Tedford passed away on Oct. 20, 2021.

Many may associate Tedford’s legacy with the Scales Fine Arts Center, as his vision helped foster the building’s construction and establish a presence for theater at Wake Forest University. But for those dear to him, his compelling personality will be remembered even above his many accomplishments.

“He was always trying to create new ways for people to be involved in theater, whether they were wanting to be an actor or not,” Department Chair of Theater and Dance Nina Lucas said. “But his personality was just infectious.”

Tedford, as described by Theatre Professor Mary Wayne-Thomas, had not only a warm heart, but a heart “rooted firmly in the theater.” Tedford had a passion for influencing students to love the theatric arts.

“When you’re in academia you can get into the grind and forget the passion and the love that you have for the art that you’re doing,” Lucas said. “He never, ever let that go, and I think that was a really important thing about him.”

Tedford established the theater as a place everyone could experience, not just elite actors. He even encouraged one unlikely student to pursue acting as a career.

“One particular student, a baseball player who had little interest in the theatre, was told by Harold Tedford that he should take a theatre class,” Wayne-Thomas said. “The student was hooked, and has since become an actor, a published playwright and a theatre teacher.”

Tedford also taught a theater course to current theatre professor Brook Davis when she was a sophomore at Wake Forest.

“[Tedford]taught my Intro to Theatre class when I was a sophomore here,” Davis said.  “It was around that time that I decided to add a theatre major.  Obviously, that decision changed my life.  One of the biggest honors of my life was coming back and teaching Intro to Theatre in the very same classroom where I sat in his class as a student.”

Tedford was dedicated to immersing his students in the world of theater. He did this by directing over 40 plays and by taking hundreds of students on trips to New York and London to learn about theatre globally.

Aside from impacting the students around him, Tedford touched the lives of many current professors, including Professor Wayne-Thomas.

“[Tedford] hired me for my first academic job,” Wayne-Thomas said. “I thought I’d come to Wake Forest for three years and then move on. 41 years later, I’m still here. Harold helped make this a good place to work and to collaborate.”

“He was always optimistic, very positive and excited,” Lucas said. “He had information about everything. He would be able to talk to me about what’s going on, he knew what we were producing and he knew so many people. So, if I said, ‘I’m looking to do this or that,’ he would be able to give me tons of information. He was vibrant, not narrow-minded. I mean, his wealth of knowledge was so impressive.”

Lucas said that Tedford’s role in establishing and promoting the arts throughout Wake Forest was invaluable.

“He established the arts here at Wake Forest, in my opinion, as something to be valued,” Lucas said.

She continued: “Sometimes in institutions, the arts are not always valued. He was a big advocate for making sure that we had the funding and things that we needed, but also general respect and acknowledgment.”

In 2016, as a token of Tedford’s contribution to the arts and love for those around him, donations from friends and students allowed The Main Stage Theater to be renamed “Harold Tedford Main Stage.”

A celebration of Professor Tedford’s life is being planned for the spring, and an obituary can be found online.