Wake Forest sails past Duke and into history

With a 45-7 rout of the Blue Devils, Wake Forest football is 8-0 for the first time ever 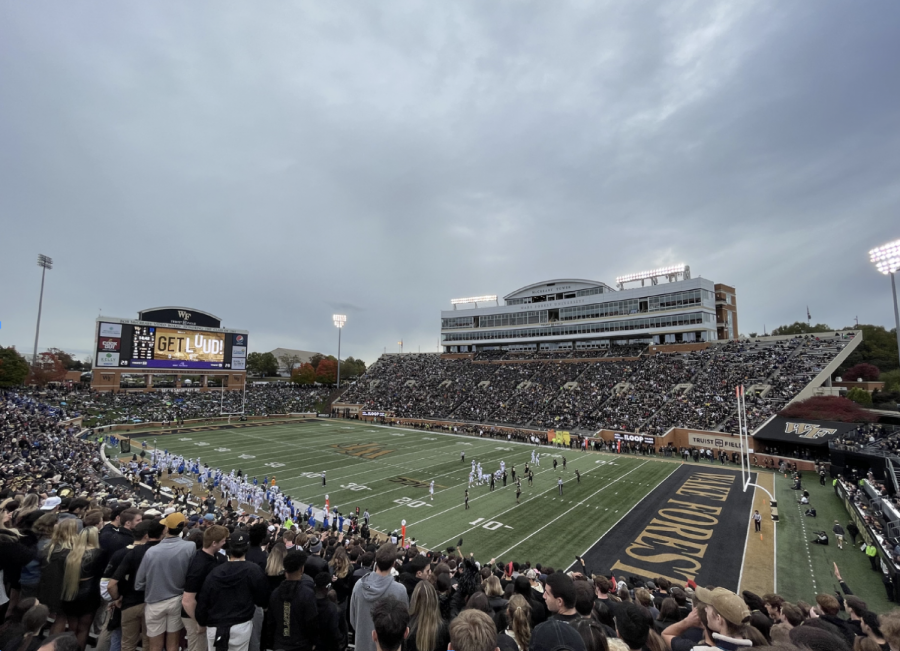 31,613 screaming fans, including nearly 80% of the student body, traveled to Truist Field to watch as the Demon Deacons cruised past the Blue Devils en route to a No. 10 ranking in the AP poll.

The Wake Forest football team has won many games in their 114 seasons, but on Saturday, they captured one of their most monumental wins in program history. In front of a sold-out crowd, the Demon Deacons defeated Duke in a 45-7 rout.

The win saw Wake Forest improve to 8-0 for the first time in program history. As a result,  the Demon Deacons were ranked No. 10 in the AP poll Sunday, its highest ranking ever.

On Monday, Hartman was named the ACC quarterback of the week and a Maxwell Award semifinalist. The accolade recognizes him as one of the 15 best college football players in the nation.

On the game’s first drive, the Wake Forest offense picked their way through the porous Duke defense. Redshirt junior running back Christian Beal-Smith led the way, beginning the drive with three rushes for 22 yards.

Beal-Smith’s carries opened up the passing game for Hartman, who capitalized on mismatches in the Duke secondary. Inside the Duke 40-yard line, Hartman ran the delayed run-pass option, which opened up the defense and allowed redshirt junior Jaquarii Roberson to get open over the top. Moving forward in the pocket, Hartman hit Roberson in stride, leading him into the end zone for the game’s opening score.

On the following drive, Duke recognized the need to score and keep up with the Wake Forest offense. After securing one first down on a 23-yard pass from quarterback Gunnar Holmberg to Jake Bobo, Duke was forced into a fourth-down decision.

On fourth-and-four, Head Coach David Cutcliffe decided to go for the first down. The decision backfired when the pass from Holmberg to a wide-open Jalon Calhoun fell flat, giving the ball back to the Demon Deacons on the four-yard line.

With 96 yards of field ahead of them, Hartman and the offense were faced with a tall task. On third-and-seven from their seven-yard line, Hartman escaped the pocket to his left and threw across his body, finding tight end Brandon Chapman over the middle for 16 yards.

On the next play, Hartman found freshman wide receiver Ke’Shawn Williams streaking down the field for 37 yards. Once inside Duke territory, Hartman took over. After completing two passes for 16 yards, he drifted to the left side of the pocket, looking for a receiver. With none open, he sprinted into the open field, going 26 yards for the touchdown.

For the first time in the game, the following Duke drive tested the Wake Forest defense. Over the course of five and a half minutes, Holmberg and the Blue Devils marched 71 yards down the field to the Wake Forest 13-yard line.

On fourth down, the Wake Forest defense locked down the receivers and forced an incompletion, causing their second turnover on downs of the game.

Leading by 14, Hartman starred again on the ensuing drive. On two consecutive completions, the offense gained 22 yards. Then, Hartman sprinted down the field for a 42-yard gain to the Duke six-yard line.

Inside the red zone, Wake Forest took to the ground in an attempt to punch the ball into the end zone. On the first two efforts, the Demon Deacons only gained two yards. On third down, Hartman called his own number, gaining the final four yards for the score.

Trailing by three touchdowns, Duke’s following drive began promisingly when Holmberg found receiver Eli Pancol for a 23-yard reception. Then, Durant took off on the run. For much of the play, it looked as if he might score, but at the Wake Forest 45-yard line, defensive back Gavin Holmes wrestled the ball free. Traveon Redd scooped up the loose ball and returned possession to the Demon Deacons.

The third turnover of the game was indicative of a complete and total dominating performance from a Wake Forest defense that was looking to redefine themselves after a poor performance against Army. Against Duke, the defense only allowed 315 total yards.

After the game, Wake Forest head coach Dave Clawson was satisfied with his team’s performance.

“That [game] breaks a two or three-week streak in which [our defense] didn’t play up to their capabilities,” Clawson said. “I thought they played hard today. They played with a lot of energy. They had a lot of pride.”

Looking to go up by four touchdowns, Hartman began the ensuing drive by completing three straight passes for 50 yards to move into the red zone. After a five-yard gain from freshman running back Justice Ellison, Hartman found Williams on a pick-route for the three-yard touchdown.

From there, the drive stalled, bringing kicker Nick Sciba onto the field for his first field goal attempt of the game. In the midst of a 24-kick conversion streak, Sciba faltered, missing wide left of the goalposts from 26 yards out.

Following the Sciba miss, both teams went three-and-out, leading into the end of the half. At halftime, Wake Forest looked well on their way to a blowout victory, leading by 28.

To begin the second half, the Wake Forest defense picked right back up where they left off, forcing another three-and-out for the Duke offense. A misfire from Duke punter Porter Wilson saw the Wake Forest offense take over at their 45-yard line.

From there, Hartman reignited his connection with redshirt junior wide receiver A.T. Perry, completing two consecutive passes to him for a total of 45 yards. After the two completions, Beal-Smith handled the rest.

After running through the line of scrimmage, Beal-Smith bumped to the right side of the field and hustled into the end zone. Before scoring, Beal-Smith turned to the student section on his right and pumped his arms, igniting the packed stands into a frenzy.

After securing one first down, Duke was again denied by the Demon Deacon defense on three straight downs. In a sign of surrender, Duke punted on fourth down.

On first down of the ensuing drive, redshirt sophomore running back Christian Turner kick-started the Wake Forest offense by rushing for 48 yards. Inside Duke territory, Hartman completed two passes to Williams and Banks for 27 yards.

Following the completions, the offense was unable to get into the end zone, bringing Sciba out for his second field goal attempt of the game. This time, he was successful, giving the Demon Deacons a 38-0 lead.

After another Duke three-and-out, Wake Forest registered the final blow. On third down, Hartman found Perry over the middle for a 37-yard completion. After the completion, Hartman threw one final pass, a touchdown to redshirt freshman Taylor Morin.

Leading 45-0 early in the fourth quarter, Wake Forest pulled their starters. Midway through the final quarter, backup quarterback Riley Leonard led the Blue Devils on their lone scoring drive of the game. After a 39-yard completion to Calhoun, Leonard rushed into the end zone for the two-yard score.

After Duke’s first score of the game, backup quarterback Michael Kern and backup running backs Quinton Cooley and Ahmani Marshall ran out the remaining seven minutes on the clock, securing the 45-7 victory for the Demon Deacons.

In his opening message to the media after the game, Clawson expressed gratitude for a student section later recognized as the largest in Wake Forest history. In total, 4,233 students — dressed in all black — attended the game. They represented nearly 80% of the student body.

“I really want to thank our students,” Clawson said. “That’s the biggest student crowd in the history of Wake Forest football. And boy, they made a difference.”

“When we took the field, we saw that student crowd, and they were active, and they were loud,” Clawson continued. “I can’t tell you how much that means to our football team. Our players felt it, our coaches and our staff, too. It makes a difference.”

The students who attended the game were also excited by the success of the team and all the support they have garnered.

“It’s insane,” freshman Sean Kennedy said. “I was able to see photos of our student section on Twitter and it looked enormous. [We went] all the way into the top deck. It’s really great to see the amount of support that the team has.”

After the win, there is still much ahead for Wake Forest. On Saturday, the Demon Deacons will face North Carolina in Chapel Hill.

Despite being the No. 10 team in the nation, Wake Forest opened as three-point underdogs in the matchup.

At 8-0 and in the Top-10, both for the first time ever, Wake Forest controls their own destiny. Winning the rest of their games would clinch an ACC Championship appearance for their first time since 2006. From there, anything is possible, including a College Football Playoff berth.

For now, the week ahead is all that matters. Hartman’s mantra: “1-0 every week.”

Add those ones up, and they might just equal a championship.