Michigan vs. MSU turned into a nail-biter, but MSU held on with a 4-point lead 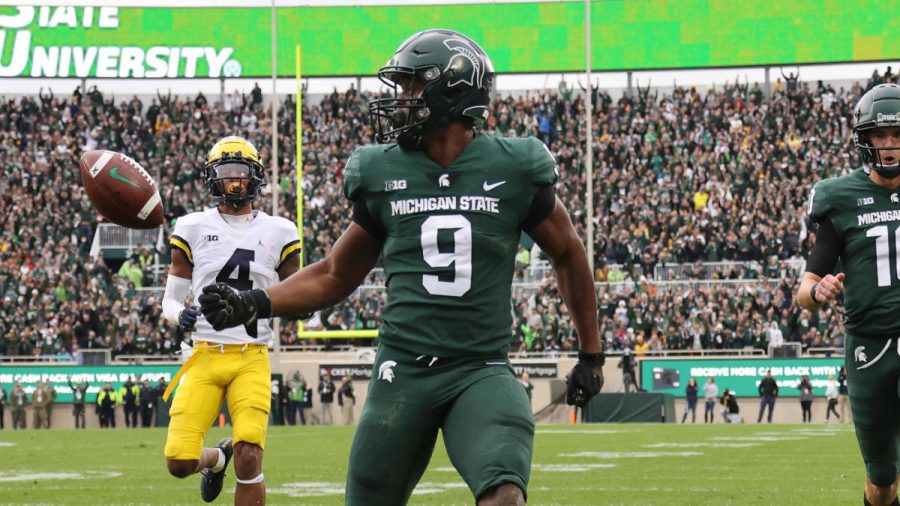 The week’s biggest game was a rivalry matchup between No. 6 Michigan and No. 8 Michigan State. Michigan got up to a 30-14 lead in the third quarter, but the Spartans were able to ride a phenomenal performance from running back Kenneth Walker III to a comeback win. Walker III rushed for 197 yards and five touchdowns, the last of which gave Michigan State a 37-33 lead and secured the win. Michigan played a great game, generating 552 yards on offense. However, they had to settle for field goals on four different trips to the red zone and turned the ball over twice in the fourth quarter, all of which helped MSU complete their comeback.

No. 18 Auburn beat No. 10 Ole Miss 31-20, securing their second straight win against a ranked SEC West opponent. Quarterback Bo Nix had one of his best games as a Tiger, throwing for 276 yards and a touchdown. He added two more scores on the ground. On the other hand, Ole Miss quarterback and Heisman hopeful Matt Corrall had a rare game with no passing touchdowns and what was only his second interception of the year. Additionally, he threw an incompletion on fourth down on three different red-zone possessions in the second half, spoiling any chances of an Ole Miss comeback.

No. 5 Ohio State faced their first real challenge since their loss to Oregon in No. 20 Penn State and pulled out a 33-24 victory. Penn State bounced back from their inept performance against Illinois and kept it close against the Buckeyes, but kicker Noah Ruggles drilled two field goals in the fourth quarter to help Ohio State come away with the victory.

Upsets abounded on Saturday, with six ranked teams being taken down by unranked opponents. No. 9 Iowa lost 27-7 to Wisconsin, whose defense forced three turnovers, held Iowa scoreless in the first half and limited the Hawkeyes to 24 rushing yards on the day. This was the second loss in a row to an unranked opponent for Iowa, who prior to this game had climbed all the way to No. 2 in the polls.

No. 12 Kentucky also suffered its second loss in a row, this time to Mississippi State. Bulldogs quarterback Will Rogers had an extraordinarily accurate day, completing 36 of his 39 passes. Their defense picked off Kentucky quarterback Will Levis three times while also recovering a fumble. Kentucky now falls to 6-2 after a promising undefeated start.

In the ACC, Miami defeated No. 17 Pitt in an epic quarterback duel. Heisman candidate Kenny Pickett threw for a school-record 519 yards for Pitt, but also tossed two interceptions. For Miami, redshirt freshman and former backup Tyler Van Dyke threw for 426 yards and three touchdowns. It was enough for the Hurricanes to come away with a 38-34 win.

Houston upset No. 19 SMU 44-37 on a 100-yard kickoff return touchdown with 17 seconds left, immediately following a game-tying field goal by SMU. Houston quarterback Clayton Tune threw for a personal record 412 yards, and the Cougars were able to ruin SMU’s dreams of an undefeated season.

No. 21 San Diego State also left the ranks of the undefeated when they were upset 30-20 by Fresno State, who got their second win against a ranked team on the year. Fresno State jumped out to a 20-0 lead and forced three turnovers over the course of the game, and quarterback Jake Haener continued his dominance with his sixth 300-yard passing game of the year.

West Virginia’s offense came alive against No. 22 Iowa State, resulting in a 38-31 victory.

Quarterback Jarrett Doege threw for three touchdowns, and running back Leddie Brown added two on the ground for WVU. Iowa State got 167 rushing yards out of star back Breece Hall. A last-second pass from Cyclones quarterback Brock Purdy was batted down in the end zone, allowing West Virginia to secure the win.

For the most part, the rest of the nation’s top teams took care of business. No. 1 Georgia rolled to a 34-7 win against rival Florida and ended up clinching the SEC East title once Kentucky lost. The Bulldogs are now guaranteed a spot in the SEC Championship Game.

Additionally, No. 4 Oklahoma finally had the complete performance they had been waiting for in their 52-21 rout of Texas Tech. True freshman quarterback Caleb Williams threw for 402 yards and six touchdowns.