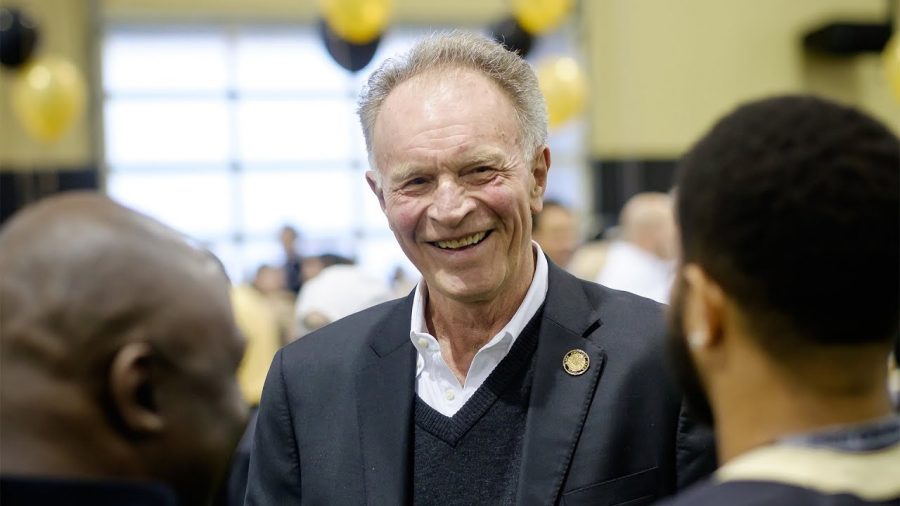 The money will go towards the McCreary Football Complex, which is set to feature updated locker rooms, training rooms and common spaces. The 60,000-square-foot structure will connect to the McCreary Field House and the Sutton Sports Performance Center. Thanks to McCreary, the complex will establish Wake Forest’s on-campus football facility infrastructure as one of the best in the country.

The complex will serve as more than just a building — its purpose is to foster camaraderie and team chemistry.

Bob McCreary arrived at Wake Forest in 1957 after earning a football scholarship, which he credits as changing his life’s trajectory. From rural Caldwell Country, McCreary thanks Wake Forest professors, coaches and athletic trainer “Doc” Martin for much of his success in college and beyond.

The 6’5” Wake Forest alum played professional football for the Dallas Cowboys before entering the furniture industry. In the 1980s, McCreary and his wife Michele founded McCreary Modern, a North Carolina-based manufacturer of premier upholstered furniture.

McCreary has kept his alma mater in mind through his career successes. The McCreary Football Complex will replace the Mark C. Pruitt Football Center’s Peahead Walker Football Locker Room, which was finished in 1988.

McCreary was honored at the annual Homecoming football game on Oct. 30, in which the Demon Deacons notched a resounding 45-7 victory over ACC opponent Duke. The team now holds a historic 8-0 record.

“This is about creating a home for the football players,” McCreary said. “For these young men to be together and to share thoughts and ideas after a practice or a game is important. That is how you build relationships.”

Plans for the new facility include a player lounge with a nutrition station, ​​locker space for 130 student-athletes, a recovery area, an entertainment area, football athletic training/treatment space, an equipment center and a loading dock.

Alongside this list, the complex will offer a multipurpose space that can seat up to 200 individuals for team gatherings, meals and other activities for all programs.

“Bob McCreary is the ultimate champion for Wake Forest Athletics,” Wake Forest Director of Athletics John Currie said. “While we are extraordinarily grateful for his financial support, Bob’s leadership role throughout the broader university community continues to inspire generations of Demon Deacons. In line with our vision of being a model intercollegiate athletics program, Bob himself models the limitless aspirations of our students and university community.”

In 2008, McCreary received the Gene Hooks Lifetime Achievement Award, which honors former athletes for their integrity, charity and leadership. Five years later, he was inducted into the Wake Forest Sports Hall of Fame. McCreary received the Distinguished Alumni Award in 2016, and in 2019, he was honored as an ACC football legend.

“Throughout my eight years at Wake Forest, Bob McCreary’s transformational leadership and generosity has helped build the foundation for our program to compete at the highest level,” Head Coach Dave Clawson said.

Clawson continued: “From McCreary Field House, Sutton Sports Performance Center and the Christian McCreary Nutrition Zone, the commitment to provide the best facilities to help our student-athletes on and off the field have allowed us the ability to recruit young men that make our university community proud Overall, Bob’s generous support of our football program has been unparalleled.”

With the development of this complex, Wake Forest begins the 4th Quarter drive that will complete the Athletics quadrant of Wake Forest’s Reynolda campus.