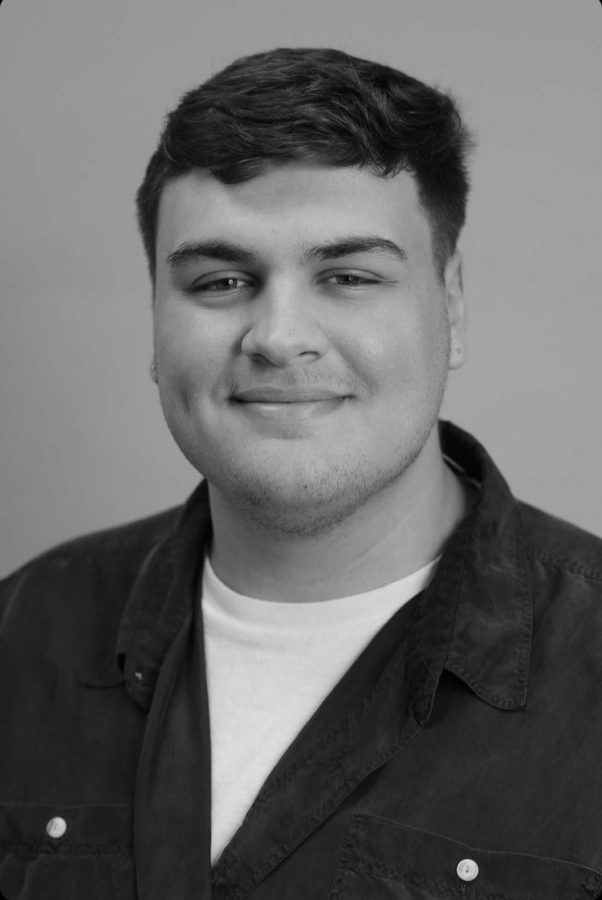 Chris Cates is a senior from Graham, North Carolina majoring in sociology and theatre. They are playing the lead role, Ned Weeks, in the Theatre Department’s production of “The Normal Heart”. Cates serves as the historian and social committee chair for the Anthony Aston Players (AAP), has been involved with research in the sociology department and has been a member of the university Dance Company since his freshman year, serving in roles such as stage manager, dancer, choreographer and lighting designer.

You play Ned Weeks — the protagonist of “The Normal Heart” — a gay activist and founder of a prominent HIV advocacy group. Does this role resonate with you, and how so?

Larry Kramer is such a prolific writer. With the COVID-19 pandemic and HIV epidemic ongoing, his words still ring true today. When I first read the script, I felt viscerally angry at everyone who wasn’t listening to Ned — his words really resonated with me.

I do a lot of activism here and back home — I’ve gotten out in the community, and had experiences like Ned’s in which I was told that I was “violent” and “dangerous.” I’ve been told that I’m too loud — that I need to be nicer, and more willing to meet people where they’re at.

While I agree that there are times when we can compromise, I don’t feel like most of the things that I’ve done required compromise. I feel this connection with Ned because we’re both told that we’re too much when we just want to help and make sure that our people are safe and understood.

Something I love about this play is that there’s no catharsis. You feel angry and upset, and you’re stuck with that. I hope our audience takes the information on HIV and AIDS that we’ve provided and learns more. Before “The Normal Heart”, I didn’t know much about the epidemic. It’s been 40 years, and this is still going on, and we’re still not talking about it. I hope people find local groups that help HIV-positive people who don’t have access to healthcare get the resources they need.

How has your role in “The Normal Heart” has allowed you to grow as an actor? How has it challenged you?

When I first learned about this play three months ago, I was practicing grief because, spoiler alert, it gets heavy at the end. Those attempts brought up this question of how someone could possibly grieve for the person that they love more than anyone else in the world. Just a couple of days later, I lost my mom. Going through that, I felt lost and separated from the whole world.

Theatre has allowed me to reconnect and pull myself back to my community and the people that I love. It has offered a space where I can continue to grieve while simultaneously cultivating deep and meaningful relationships. We bring roles to life through our personal experiences, but there’s so much more out there for us to learn. I feel reassured that I’m going to be okay, that I can keep pushing. If I can cry on stage with this much hurt in my soul, I can do anything.

What do you hope to see from Wake Forest Theatre in the future?

I hope we continue to do “art-ivism” productions similar to this one. Our audiences have said that we’ve been showing deep humanity, and I hope that we continue to do so. This has been one of the most impactful and urgent issues that we’ve highlighted in our productions. I hope we continue to showcase different oppressed groups and give our audience tools to practice allyship. Instead of just leaving audiences with a story, I want to leave them with the resources to hold themselves accountable and help these communities.

How do you think The Normal Heart sets the stage for greater representation in future productions?

I hope the queer representation in this play allows room for more diverse queer stories and that we can push past this narrative that to be gay is just to be a white cisgender male. We need to ask ourselves how we can represent people on the periphery of the queer community in positive ways and choose the stories that will help us grow as a community. We want to not only accurately represent the horrors that they face, but also their moments of joy, relief and peace.

How have your identities factored into your experience at Wake Forest?

I am a first-generation, queer student — I am nonbinary, I’m poor and I wear flamboyant clothing. I’m constantly looked at with disgusted eyes, just walking across campus. I either hear, “I love your outfit” or “ew, get away from me.” I’m not afraid to speak my mind, and I’m not afraid to make things known that should be publicized. I’ve received a lot of backlash, but I’ve also received a lot of support from the people that I care about.

Wake Forest has given me a lot of opportunities, but I’ve learned that it’s my responsibility to find my community, build my support groups wherever I go and ensure that I can continue to thrive and succeed. There’s always going to be white supremacy, patriarchy and cisheteronormativity. Being here has helped me learn to combat those systems of oppression while finding my place and cultivating my communities and support groups.

Do you think Wake Forest has done enough to accommodate students with diverse identities? What do you think it can improve on?

It’s taken me years to realize that I should have reached out to certain people or used certain resources. We’re expected to know how to find and access resources without much assistance. Luckily, I’ve found some amazing professors who have helped me with that, but students like me should be told how to stay in touch with the right resources and programs during their first year so that they’re set on the best path to success from the start.

What connections have you been able to make between your sociology research and your experiences on campus and in theatre?

I found activism before I found sociology. I did a lot of theatre in high school, and our teacher always made sure that our plays had a social justice aspect. I’ve always felt that theater is a place to do social justice work and explore people’s humanity. When I got to Wake Forest, the anti-racism coalition came alive. A lot of demands were made from the school to help students of color and eliminate white supremacy. Some of these demands haven’t been met, but this push for justice has helped me find people I admire and look up to. Through these people, I found the sociology department and have taken all of the knowledge I’ve acquired there and applied it to theatre and art. The biggest thing I’ve learned is that you can tell people anything, but until you help give them the tools to do something about it, it’s all for naught.

What are you involved in on campus outside of theatre?

Over the past four years, I’ve been a part of the Wake Forest Dance Company, performing, choreographing and managing routines in concert and onstage. I’m also involved in the student theatre group, the Anthony Aston Players (AAP). I’ve served as the historian and Social Committee Chair for AAP, planned countless events and participated in many fun campus traditions like Hit the Bricks and Project Pumpkin. My freshman year I was a cheerleader for the football, volleyball and basketball teams, which was great.

I’ve also loved going to the LGBTQ+ Center and the various events that they hold, as well as the Intercultural Center. I try to make sure people’s voices are heard on this campus, whenever it’s needed.

Have your other involvements helped you as an actor?

I’ve learned to talk to people — I used to talk really fast and now I can slow down. Meeting so many different people from all walks of life has allowed me to be more in the moment and not rush through my conversations and activities. In “The Normal Heart”, everything is so urgent and passionate and angry that you might expect to speed through it, but no: because everything is so urgent, you want to make sure that everything you’re saying is heard. You want to be articulate and have good diction.