Students, faculty and staff attended an event on Nov. 1 about renaming buildings 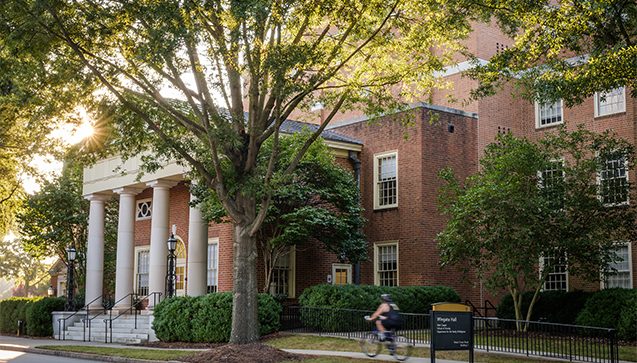 What is in a name? Who do we honor? And how, where, when and why do we honor them?

These questions were central to the discussion at the town-hall-style meeting on building renaming that was hosted on Nov. 1 in the ZSR Library.

Students, faculty and administrators gathered to hear a panel speak on the importance and implications of naming buildings. The panel was moderated by Vice President for Diversity and Inclusion Dr. José Villalba. The panelists included Dr. Jon Bohland, an associate professor of international studies at Hollins University, Dr. Corey D.B. Walker, a Wake Forest professor of the humanities and the founding director of the new African-American Studies program and Dr. Sherri Lawson Clark, an anthropologist who teaches courses at Wake Forest on cultural anthropology and social stratification in America.

The event was hosted to spark conversation around both the philosophical and practical implications of renaming buildings. These conversations are important, as Wake Forest continues its search for a new name for the Divinity and Religious Studies Building, and considers the names of all buildings on campus.

As Villalba asked the panel questions, two main themes emerged from their dialogues: the panelists provided insights on why names are so important and the significance of considering who held the power to name something in the past

When considering what a name means, Bohland drew upon his expertise as a geographer and his experience living in Virginia — a state which, because of its rich Confederate history, has consistently had to wrestle with the names it has given to buildings, roads, schools, in the past. Through his research on nationalism, identity and heritage in the American South and his witnessing of Confederate names on structures in Virginia, Bohland provided valuable insight on how names tell stories and promote cultural values.

“[A name] reifies a story over and over again,” Bohland said. “It tells us who our heroes are supposed to be and who they are not — whose version of the past counts and whose is to be excluded.”

The panelists stressed the point that names tell crucial stories, but also that only certain people were able to assign those names and tell those stories, which perpetuates certain agendas and ideologies. Consequently, it rejects others.

“This issue of naming comes down to who has the right to tell versions of the past and present — whose stories get validated and told, what stories are hegemonic and how stories are inscribed on the landscape,” Bohland said.

When asked why we name things, Walker approached the question by asking “who constitutes ‘we’?”

“What the naming conversation exposes is, not only the history of the practice of [colleges and universities], it also begins to unravel the question of knowledge and power in the university,” Walker said. “It’s not just about a building or a particular item on a landscape, it is about the power to name reality.”

Bohland also brought up the importance — not only of names on campus — but also the landscape and built environment. He gave the example of what Hollins University’s campus — which he described as “something out of ‘Gone With the Wind’” — communicates to its students of color. He says students of color there have reported feelings of shock and nonbelonging when they step onto campus and see antebellum-style architecture.

This intention is the very thing that those responsible for renaming buildings on campus at Wake Forest are working to understand. After reflecting on how names have historically indicated who held power in the past, Clark urged those in attendance to consider the significance of who will have a say in the next name, and how the group will affect those who interact with the name and space going forward.

“Naming a space denotes pride, community and ownership,”  said Clark. “When we think about those guiding principles of naming, we must think of those multiple stakeholders and how they are able to enter the room, sit at the table and state how this particular name is going to affect me.”

Clarke also gave a reminder that, just as the old name told a story, perpetuated ideology and symbolized a culture, so too will the new name.

“Should we take a name down, we need to fear what replaces it,” she said.

Clark offered another reminder that changing names is not a quick fix.

“The practice of taking down names or taking down memorials doesn’t erase that history, nor does it erase the institutional practices that individuals experience on a daily basis,” Clark said.

These surveys will serve as the main way the Wake Forest community can voice their questions, concerns and considerations as Wake Forest works to rename the Divinity and Religious Studies Building and reconcile with its past.