Wearing “The Normal Heart” on your sleeve 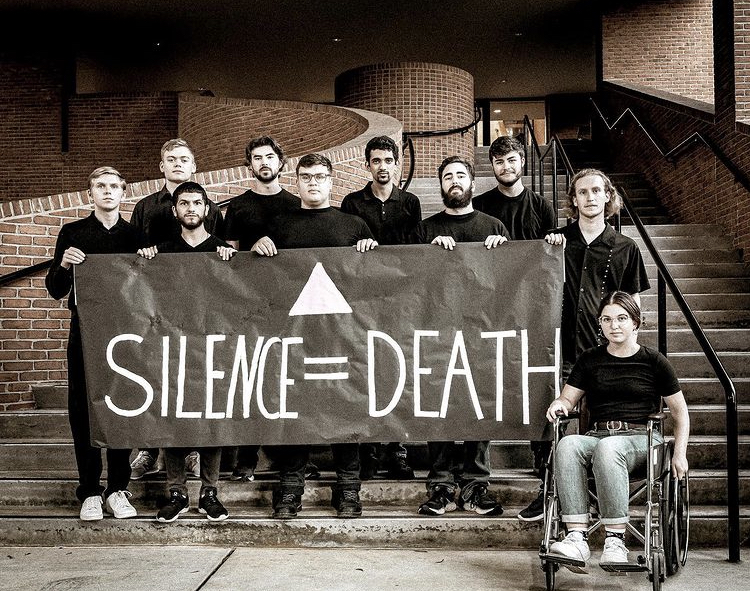 The cast of “The Normal Heart” poses with their “Silence = Death” poster, which now hangs in the Scales Fine Arts Center lobby.

Although the prevalence of AIDS is no longer at the height that it was in the 1980s, the crisis is far from over. People across the globe have been living with HIV/AIDS and dying from complications of the disease for the last 40 years.

In the beginning, there was no expeditious vaccine rollout or around-the-clock research being conducted. Patients with the disease were overlooked and ignored because of AIDS’s early association with gay men. Written by Larry Kramer in 1985, “The Normal Heart” tells the autobiographical story of the early years of the epidemic, exploring the feelings of confusion, anger and rage experienced by him and his friends.

The play follows Ned Weeks, the character based on Kramer, and the many men involved with the formation of the Gay Men’s Health Crisis, a foundation created to fight AIDS and fund research in the absence of the government’s involvement. The conflicts within the organization’s leadership lead to many intense moments as the characters consider the best ways to address the epidemic, experiences with the disease and their shared identity. But, the entire play is far from a screaming match.

“[The play] is not all the way sad even though it is about a very specific historical moment,” senior Abigail Franke, who plays Dr. Emma Brookner, said. “It’s also angry and it’s a fight call to stand up and to be seen for the fight to just have your voice heard.”

Many of Franke’s castmates expressed similar sentiments about the importance of performing this story now.

“We don’t really learn about [the AIDS crisis],” senior RJ Pratt, who plays Mickey Marcus, said. “We are not taught that when we learn about the ’80s and the Cold War. We don’t learn about this struggle — it is a massive part of American history that just gets overlooked. Almost an entire generation of gay men was wiped out, and it’s not talked about, it is not discussed. But, this show brings [that struggle] to the light.”

One of the main objectives of the play is to educate, and the cast and crew were able to do so off the stage, too. The lobby of the Lower Scales building is filled with posters of celebrities who either were affected by HIV/AIDS or are current advocates for those with the disease. A large “Silence = Death” poster hangs from the second level, and the wall from the box office to the Tedford stage doors is covered with articles and graphics. There is also a timeline of the entire epidemic, starting with the first recorded case in 1959 and stretching all the way to the present day.

The timeliness of the show should also not go unnoticed. Parallels can be drawn between the AIDS epidemic of the 1980s and the current pandemic, but “The Normal Heart” capitalizes on these differences. The fact that there was such a resounding response to COVID-19 cases worldwide rather than the silent spectating that occurred in the ‘80s is one thing director Brook Davis spoke on in the show’s program.

“In 1981, when the first cases of AIDS were being named in the U.S., the fear and panic in the gay community were met with a deafening silence and disregard from many,” she wrote in the director’s note. “Stigma, discrimination, and hate language were commonplace on a national stage.”

Davis continued “I am sure, were he here, Larry would rage at us to get out of these theatre seats and go continue the massive work that still needs to be done.”

“The Normal Heart” will continue to run through Sun. Nov. 7, with performances from Nov. 4-6 at 7:30 p.m. and at 2 p.m. on Nov. 7. After the Friday, Nov. 5 show, there will be a discussion about issues raised in the production featuring Dr. AJ Mazaris, director of the LGBTQ+ Center, and Dean of the Divinity School Jonathan Lee Walton.