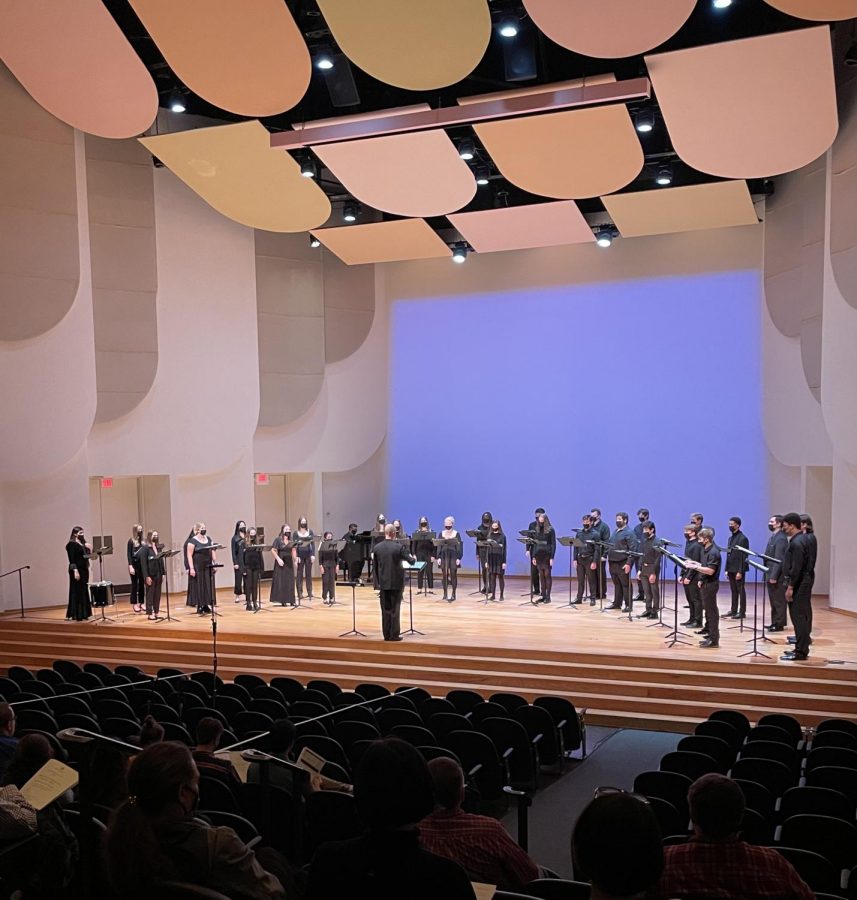 “We started out with songs literally about night and dreams, like “Stars” and “Only in Sleep,” and then transitioned into more hopeful ones about dreams for the world with songs like ‘Wake! Now a Time Has Come'” sophomore and ensemble member Sarah Ambrose said.

The concert featured 10 songs, with a live piano accompaniment from Professor Bryon Gorelick. By all accounts, seems the progression to hopeful music was fitting for the performers’ transition to a live audience.

“Even though we had virtual concerts and even got to perform at commencement last year, nothing can compare to the feeling of singing through a whole program you’ve worked so hard on in front of a live audience,” Ambrose said.

In addition, another performer, Hannah Murrow, emphasized the importance of having a live audience to capture the sentiment of the performance.

“I had never realized how important it was to have a live audience while performing,” Murrow said. “There is just something about that transfer of emotions from the performers to the audience, the storytelling of a concert, that we lost in the pandemic. I almost burst into tears of happiness when we first walked into Brendle Recital Hall at the start of the concert.”

She added that one particularly emotional aspect of the concert came when she performed her solo.

“I had sung that same solo in my junior year of high school, therefore I had a close connection with the piece and its message,” Murrow said. “I found that singing the same song two years later, I had a different feeling. I felt the nostalgia, the remembrance of high school memories and the emotions of performing it in front of a live audience. Seeing how the song affected people . . . it felt like a dream to be singing it again in front of an audience.”

Behind the scenes of this emotional experience are countless hours of rehearsal, Monday through Thursday from 5 p.m. to 6 p.m., every week. Sometimes, there is a great deal of frustration, too.

“Sometimes in rehearsal, we end up going through a piece measure by measure, doing the same thing over and over again until everyone gets it right,” Ambrose said.

She continued: “This level of attention to detail can be frustrating because we just want to keep going and actually sing through the pieces, but it does help us in the long run because we’re able to put all of that work on the small details together to make the performances even better.”

Dr. Christopher Gilliam, Director of Choral Activities at Wake Forest University and conductor of the concert, leads these rehearsals and always encourages performers to strive for improvement.

“Sometimes we work on rhythms, sometimes on note accuracy, dynamics, diction, and more,” Murrow said. “Dr. Gilliam is not afraid to stop us in the middle of a song to critique us, which of course makes us better, more disciplined musicians in the long run.”

Students highlighted some of the obstacles overcome in rehearsal in preparation for the performance. Ambrose specifically noted the challenging nature of one song,  “Leonardo Dreams of His Flying Machine” by Eric Whitacre.

“It’s split into so many parts that, a lot of times, there were only one or two people on each part,” Ambrose said. “The notes and rhythms were also really challenging to learn, and since there were so few people singing the same part as you, it really underscored the importance of knowing your own part super well.”

Larry Bai detailed the difficulty in memorizing the lyrics of “Brindisi”, a piece written in Italian. During the performance of this song, the ensemble engaged in some stage choreography as certain members performed solos, including Bai.

“Because this song requires some performance, the group really is expected to memorize the libretto,” Bai said. The best way for this kind of memorization is repetition. During the last few rehearsals, we ran this song almost every time, and that really helped.”

Despite the obstacles and weeks of strenuous rehearsal, the dedication of the students and Gilliam to the art of music echoed throughout Brendle Recital Hall during the performance.

“We’re all really dedicated to music, and it’s been so fun to learn alongside and bond with some really talented musicians,” Ambrose said.

She continued: “I have so much love for this choir, and I’m grateful for everything I’ve learned from my fellow singers and from Dr. Gilliam, too. We put a lot of work into this concert. We started working on a good number of the pieces that we performed tonight back in August.”