In a back-and-forth match, a late Duke goal proved to be the Demon Deacons’ downfall 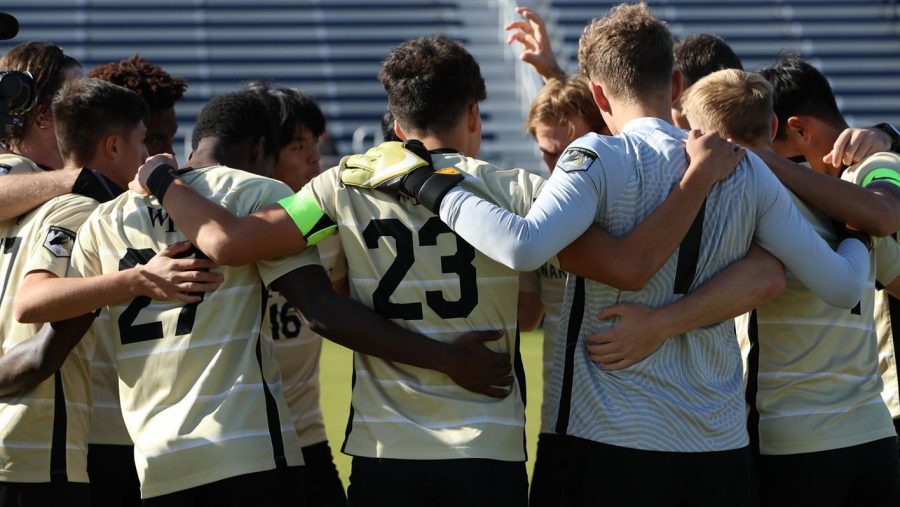 The men’s soccer team will find out if they have a chance at the NCAA crown during the selection show on Nov. 15 at 1 p.m.

With mere seconds left on the clock, the entirety of the Wake Forest men’s soccer powered forward in a last-ditch equalizing effort. Yet, rather than play the ball into the box, the Deacs chose to play it short. Their ultimate cross was blocked as time expired.

This final play was the cap to a frustrating afternoon for the Deacs, a 3-2 loss to the Duke Blue Devils in the ACC Tournament quarterfinal round that was mired by close calls and refereeing inconsistencies.

The Deacs took an early lead after a penalty was called when a Wake Forest header hit the outstretched arm of a Duke defender. Junior Jake Swallen stepped up in the 27th minute, but saw his initial shot saved. Luckily for the veteran midfielder and the Deacs, the rebound fell right to his feet, and Swallen coolly put the ball into the back of the net for his fifth goal of the season.

The No. 3 Blue Devils roared back to life, led by a masterful performance from sophomore Thor Ulfarsson. Ratcheting up the pressure, Duke penetrated deeper and deeper into Wake Forest territory, ultimately winning a dangerous free kick on the edge of the Deacs’ box in the 30th minute.

Ulfarsson stepped up and curled a phenomenal right-footed effort into the top corner past the reach of freshman goalkeeper Trace Alphin to level the score. Minutes later, the Icelander was at it again. This time he waded through the Deacon defense toward the edge of the box, and once there, received a pinpoint pass before deftly placing the ball past Alphin.

Ulfarsson’s dominance was not a fate experienced solely by the Deacs — the sophomore striker has scored in all but three matches this season. Undoubtedly one of the most dominant attackers in college soccer, combining pace and finishing prowess, Ulfarsson has scored 13 goals in just 12 appearances.

Duke never took their foot off the gas, forcing costly Wake Forest turnovers and threatening the Deacs’ goal throughout the rest of the match. Yet, just before half, the Deacs drew level when junior Nico Benalcazar powered a header past the Duke keeper off a corner kick.

Refereeing inconsistencies defined much of the rest of the match, beginning with what appeared to be a hard foul against junior Omar Hernandez. The midfielder was clattered with what seemed like a textbook foul, and the tackle ultimately knocked the key playmaker out for the remainder of the game with a knee injury. Later in the second half, freshman Julian Kennedy was brought down after storming past his defender, only for the referee to once again rule that no foul had occurred, despite the increasingly vocal Deacon protests.

Duke snatched a late-winner when Jai Bean scored his first collegiate goal in the 77th minute. The Deacs attempted to come back, but were continually frustrated by a staunch Blue Devils defense. Freshman Babacar Niang was sent off late after picking up a second yellow card, leaving the Deacs with only 10 men as the match drew to a close.

Barring an unfortunate and unlucky turn, Wake Forest hopes their resumé will grant them the chance to return to the NCAA tournament. If so, the Demon Deacons certainly have the history and ability to surprise teams and go deep in the tournament. The team will learn if they have that chance when the NCAA Tournament teams are announced on Nov. 15.