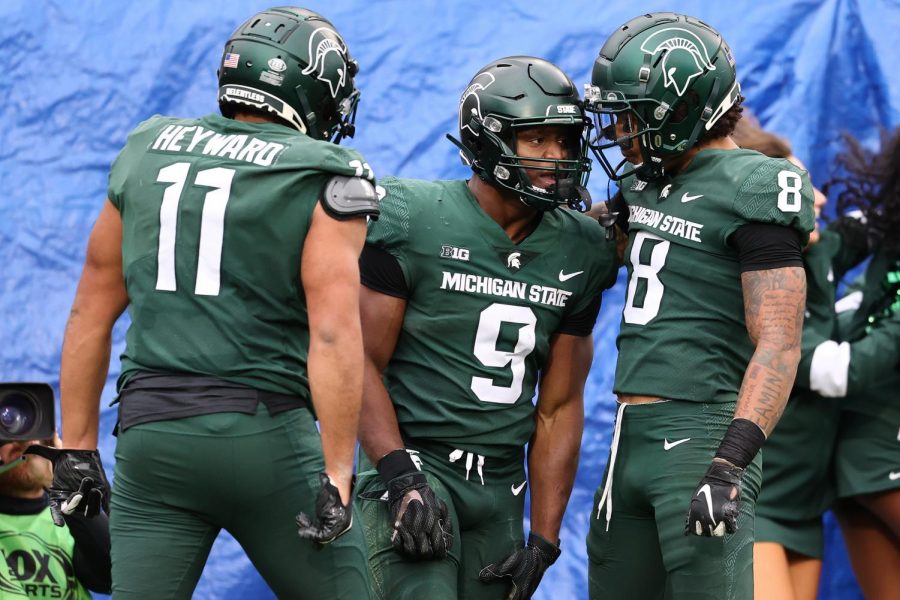 Week 10 of the college football season was not without its fair share of drama and heartbreak. While I am pretty sure all of us are still trying to emotionally come to terms with Wake Forest’s loss to UNC, plenty of other teams suffered even more disappointing fates.

The Michigan State Spartans marched into West Lafayette, Ind. on a high. The Spartans were No. 3 in the nation thanks to their resounding comeback victory against in-state rival No. 6 Michigan.

Yet, Purdue once again proved that they could never be counted out, as they played spoiler to another Big Ten team with playoff aspirations. The Boilermakers thrashed Iowa on their home turf several weeks prior, and carried that momentum into this matchup.

Purdue’s quarterback Aidan O’Connell threw for 536 yards and three touchdowns, and wide receiver David Bell was able to take full advantage of the Spartans’ lackluster defense and reel in 217 receiving yards and one score. Michigan State had no answer for the passing attack,  or really any of Purdue’s tricks for that matter. Late in the second quarter, the Boilermakers ran a double-reverse flea-flicker and scored, firmly swinging the momentum in their favor.

Former Demon Deacon running back Kenneth Walker III had 156 total yards and one touchdown for the Spartans as he continued to bolster his Heisman hopes. Michigan State’s resounding loss, could have major implications for the Big Ten title race and the playoff picture.

Michigan State faces Big Ten powerhouses No. 6 Ohio State and No. 23 Penn State in their final two matchups, so time will tell if the Spartans are able to bounce back and salvage their season.

One of the major shockers in Tuesday’s rankings was Cincinnati’s placement. The Bearcats were ranked No. 2 by the AP poll, and, despite defeating Notre Dame earlier this season, the committee dropped the hammer on strength of schedule and ranked them No. 6. Saturday’s matchup against Tulsa was a major setback for Cincinnati, as their playoff chances continue to dwindle.

In the game’s final minute, Bearcats’ quarterback Desmond Ridder fumbled on a QB sneak, giving life to Tulsa yet again. With a chance to punch it in on fourth-and-one, Tulsa running back Steven Anderson reached for the promised land, but ended up fumbling it into the endzone. Cincinnati recovered the ball and thus ended the game.

While Cincinnati’s defense stepped up in the contest’s biggest moments to secure the win, the stakes are higher for the team now more than ever. In order to secure a spot in the playoff, Cincinnati must perform like a playoff team week in and week out, as this ending will certainly not help their playoff cause.

No. 13 Auburn and No. 14 Texas A&M squared off in a defensive showdown in College Station. The only touchdown of the game was a 24-yard fumble return scoop-and-score that came early in the fourth quarter. The rest of the game was marked by field goals and defensive stands.

Texas A&M continued its four-game winning streak after shocking previous No 1. Alabama in a game for the ages a few weeks ago. This was a statement SEC West victory for the Aggies, and significantly improves their chances of making a New Year’s Six bowl game. If Alabama suffers a second in-conference loss in their remaining matchups, the Aggies have a direct path to the SEC Championship. But, now with two losses on the season, we will have to wait and see how the committee decides their fate.

The Hawkeyes were finally able to bounce back. After losing to Purdue and Wisconsin, Head Coach Kirk Ferentz’s squad tumbled in the rankings. Ranked as high as No. 2 in the AP poll, it seems as though all the hype finally got to their head. Luckily, Iowa was able to right the ship, albeit with a different captain at the wheel.

Sophomore quarterback Alex Padilla came in late in the first quarter to replace the injured Spencer Petras. Padilla led two drives, which both ended in touchdowns, in the first half against a struggling Northwestern team. While it certainly was not a statement win against the 3-6 Wildcats, Iowa snapped a two-game losing streak. Ferentz says Petras’ injury is not that major, but it will be interesting to see if there is a QB battle brewing in Iowa City.

Alabama’s sloppy play in all three phases of the game made for a nailbiter in Tuscaloosa. The LSU Tigers are not having their best season by any stretch of the imagination, which is part of the reason Head Coach Ed Orgeron agreed to part ways with the team despite hoisting the CFP trophy just two seasons ago.

Alabama quarterback and Heisman hopeful Bryce Young threw for 302 yards and two touchdowns, but a careless fumble gave LSU a fighting chance. The game was closer than it should have been in the fourth quarter thanks to errors on Alabama’s special teams.

Nick Saban must iron out these mistakes within the team if he hopes to make a run for the National Championship in several weeks’ time. This performance will not hurt the Crimson Tide, as their place in the playoff is all but secured, barring another loss. Nonetheless, sloppy play must be eliminated if they hope to repeat as champions.