Unselfish play propelled the Deacons, its abandonment led to their unraveling in Week 9 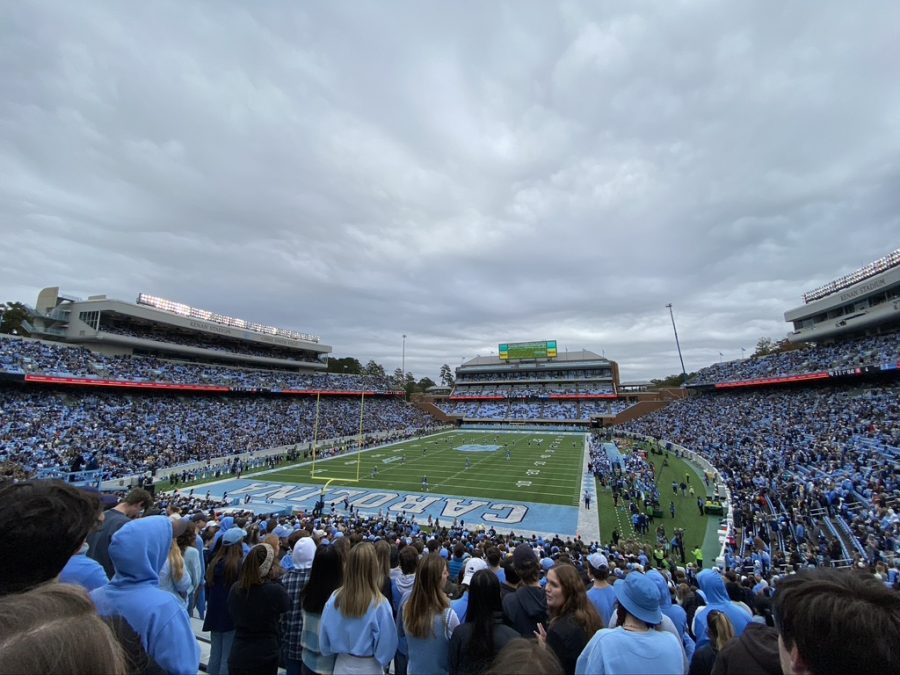 To defeat the Tar Heels in front of their home crowd at Kenan Memorial Stadium on Saturday, Wake Forest quarterback Sam Hartman knew there was little room for error. If the Demon Deacons wanted to roll out of Chapel Hill the same way they rolled in — undefeated — mistakes would have to be minimized, mental lapses few and far between.

To stay perfect on the season, Hartman and his Demon Deacons would have to play a near-perfect game. In football as in life, though, there’s no such thing as perfect.

“We’ve got to be unselfish to go from good to great,” Hartman had said several days prior to the loss at UNC, Wake Forest’s first of the season. “[For our team], putting the ‘we’ before the ‘me’ has [and will continue to] play a huge part in our successes.”

Through the Deacons first eight games of the season, unselfish players making unselfish plays enabled the team to attain unprecedented levels of achievement; during their rout of the Duke Blue Devils at Truist Field the weekend prior, those efforts were evident on nearly every snap.

“Look at Christian Beal-[Smith] — he’s our number one running back, but he’s also a starter on the kickoff team,” Hartman said. “Last week [against Army], he ran down like 10 kickoffs … he’s going full speed, making plays, taking guys on like it’s nothing.”

The quarterback continued: “Beal could be like ‘I’m the starting running back, I’m not going to give it my all on special-teams, and maybe they’ll take me off.’ But, he knows that’s a huge phase of the game, it could win us the game … that’s unselfishness.”

On Saturday at Kenan Memorial, though, the story was a different one.

Unsportsmanlike conduct and holding penalties abound — a 45-27 Wake Forest lead with under eight minutes remaining in the third quarter evaporated into a tie game only five minutes into the fourth.

For all the unbelievable throws and equally unbelievable catches, on more than one occasion, the team looked unfocused: errant passes fell short of their intended targets and balls bounced off the hands of wide-open receivers. Most consequentially, defenders committed inexcusable infractions — “dumb penalties,” as the redshirt senior Luke Masterson calls them — after the play had ended, leaving the door open to a Tar Heel comeback.

After the game, a humbled Hartman reflected on the team’s first loss since last year’s bowl game

“I made a lot of mistakes that really killed our chances to win today,” he said. “Playing an offense like that with a quarterback like that … you can’t give them that many opportunities.”

Though his game wasn’t perfect, it’s hard to lay much blame on Hartman. The redshirt sophomore threw two interceptions, but otherwise, it was another career day in a season that’s been chock-full of them: 25 completions on 51 attempts, 398 yards and seven total touchdowns — a Kenan Memorial Stadium record.

Still, because the Deacs didn’t come out with a win, Hartman bears responsibility. He’s the one under center and so the buck starts and ends with him. That comes with the job, it always has.

“It’s a fragile game,” Hartman said. “I can be the king of the world one week and the laughingstock of college football the next.”

The ebbs and flows of football, of stardom, are familiar to the self-proclaimed “fourth-year sophomore.” But with the unprecedented successes of this season — including the highest ranking in program history (No. 9, as of Week 8) — the light on Hartman has never shone so bright.

“Trying to keep a level head is difficult with all these different accolades coming in,” he said. “People tend to look at me and say ‘Oh, he’s playing so well, he’s living great,’ but there’s pressure and there are moments of anxiety [that come with that] … I’m fighting [those feelings] every day.”

Prior to the season, Hartman began regularly attending therapy sessions. Now, he’s up to two a week.

“Through therapy, [I better understand] the emotions that I feel throughout a day and can exercise better control,” Hartman said. “A younger me [didn’t have the skills to do that].”

The mountain of accolades will continue to grow for the quarterback who now ranks among the top 10 nation-wide in nearly every passing category.

Still, there is only one thing on his mind. It’s not a piece of hardware. It’s not a nomination — it’s “going 1-0 next week.”