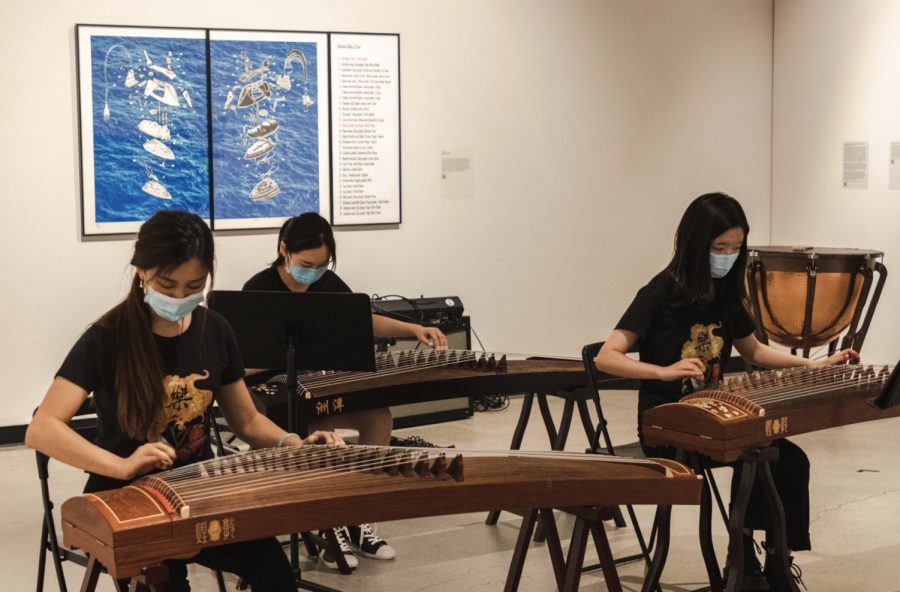 Hanes Art Gallery rang with traditional Chinese and Indonesian music on Friday, Nov. 5, as the WFU Department of Music kicked off the semester’s lineup of on-campus concerts, beginning with performances from the Chinese Ensemble and Gamelan Giri Murti.

The groups incorporated traditional and contemporary instruments to perform pieces that gave the audience a taste of commonly-played, historically-rooted music, as well as songs that reflect recent cultural phenomena.

The Gamelan Giri Murti’s opening act was a performance of “Seker Sandat,” a song translated roughly as “Balinese Flower” because the name refers to a particular flower that has no name in the English language. The Director of Gamelan Giri Murti, Elizabeth Clendinning, said “Seker Sandat” was the first song she ever learned over Zoom at the beginning of the COVID-19 pandemic. To her, this made it especially memorable and significant.

“I studied [“Seker Sandat”] with one of my teachers and friends alone, in my house, over Zoom during the pandemic,” Clendinning said. “So it was exceptionally satisfying to hear all of the parts live that I had previously only been able to imagine in my head.”

The group continued with excerpts from “Angklung Sidan,” a traditional piece, and ended with “Angklung the Sea,” which reimagines the classic Disney song “Under the Sea” with the accompanying melody of Indonesian instruments.

After Gamelan Giri Murti concluded their performance, the Chinese Ensemble took the stage and began by playing “Prelude to Spring Festival,” a song typically played before a celebration that marks the beginning of the Lunar New Year.

Xufeng (Danny) Hou, the moderator of the Chinese Ensemble’s performance, suggested that the song may be familiar to many Chinese members of the audience.

In fact, the song is so ingrained in Chinese culture that, in 2007, the song was broadcasted into space by a lunar exploration satellite.

Their second song, “Music of the Heavenly Palace”, is the prelude to a well-known Chinese TV series “Journey to the West”. That program follows the journey of a monk while he travels to India and back, bringing Buddhism to China with his return. This rendition of the nostalgic intro was played with a mixture of traditional Chinese and other more modern instruments.

“This [song] was a big part of many people’s childhood, including my own,” Hou said.

“Butterfly Lovers”, which the ensemble played next, recounts the story of a Chinese girl who disguised herself as a boy in order to attend school. At school, she meets a boy who becomes her lover. They then become so enamored with one another that they swear death would be the only reason they would ever separate. After they pass away, the two return to life as butterflies, proving that even death cannot keep them apart.

“We hope we can capture the feeling, the romance of their relationship, and maybe just a little bit of sadness,” Hou said of the piece.

The ensemble concluded with “Carrying You,” a cover of the theme song from the anime show “Castle in the Sky,” and “Sun Quan the Emperor”, a piece from a new genre of modern Chinese folk music. “Sun Quan the Emperor” was posted to Youku, a Chinese platform similar to Youtube in 2015, and went viral shortly thereafter. It became especially popular among young people because of its catchy sound.

Friday’s performance was the culmination of consistent practice throughout the semester.

The various other ensembles and performing groups within the Department of Music have also been preparing for performances later in the semester, and a complete schedule of upcoming events can be found on the music department’s website.