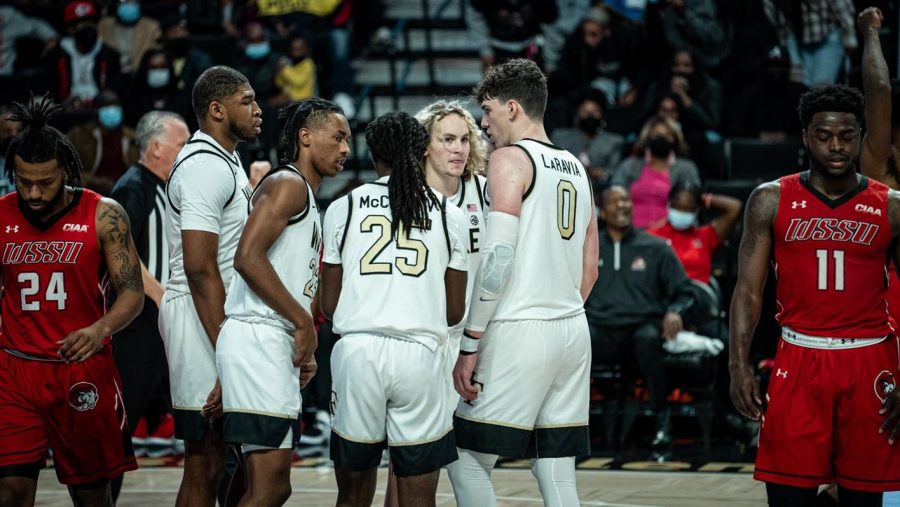 The Wake Forest men’s basketball team cruised to an 88-56 victory over Winston-Salem State on Friday in the Tip-Off Classic exhibition game.

“Thanks to Winston-Salem State for playing tonight,” Wake Forest Head Coach Steve Forbes said to the media after the game. “It was awesome to get underneath the lights and play again in front of our fans in the arena.”

There were approximately 1,200 fans in attendance for the exhibition contest.

The Deacs led 45-26 at halftime, and the contest was never really in question.

There were many encouraging debut performances, but standing out from the rest of the group are transfers Jake LaRavia and Alondes Williams. LaRavia put together a 16-point, 10-rebound double-double, while also adding four assists, four blocks and a steal in 27 minutes of play. Williams scored 16 points himself and recorded a number of assists, blocks and steals.

Guard Carter Whitt carried over his hot shooting from the end of last season, scoring 12 points on perfect shooting from the field, including 3-3 from beyond the arc. Graduate transfer Khadim Sy added 12 more points while chipping in six rebounds and three assists.

In the first public glimpse of this year’s Demon Deacon’s group, there is definitely a lot to be excited about. Compared to last season, this roster offers more depth, athleticism and shooting ability. It’s still a young team, and there are a number of new pieces that might take time to mesh together, but fans have reason to believe that year two under Forbes will be a step in the right direction.

On Friday, Wake Forest pushed the ball in transition, threw down some easy dunks, and shot a lot of threes. This year’s team should have a very similar style to Forbes’ teams at East Tennessee State.

One concern from the season debut was the number of turnovers. The Deacs gave the ball away 14 times against a team that will probably be the weakest defense they face all season.

“I thought Winston-Salem State played really hard, they played scrappy, and they played with quick hands,” Forbes said. “The turnover situation was going in the right direction until we subbed late, and those guys didn’t take care of the ball. That will be a precursor to playing time, as will being able to defend and rebound.”

The Demon Deacons looked great in this game, but the vast differences in height and talent make it difficult to learn much about this year’s squad from this one game.

On Oct. 30, ACC rival Duke beat Winston-Salem State 106-38, displaying the clear inferiority of the Division II school along with the dominance of one of Wake Forest’s in-state rivals.

Winston Salem State struggled from the free throw line shooting 8-of-17 (47.1%). Wake Forest also managed to finish the game with a 47-31 edge on the glass.

“All in all, we had a lot of guys that played tonight and we got out of it what we needed to get out of it,” Forbes said in summation.

The 2021-22 regular season officially begins for the Deacs on Wednesday, Nov. 10 at the Joel against William & Mary. The contest will tip off at 7 p.m.

On Friday, Wake Forest will face off against Western Carolina.