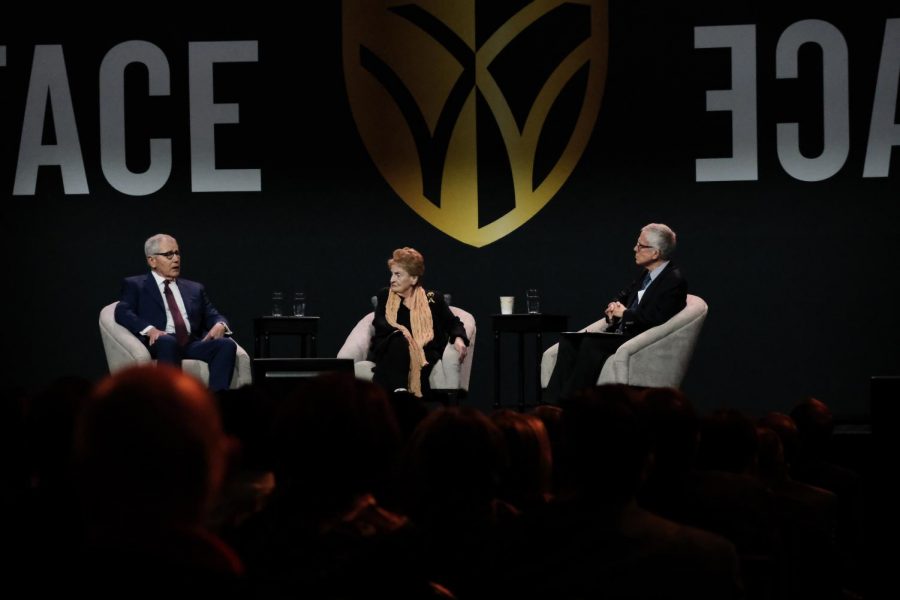 This students-only event allowed the undergraduate population to ask their burning questions on topics ranging from foreign policy to female empowerment in the workplace.

At the forum, Albright said she always knew she had a passion for politics, especially growing up as the daughter of a Czechoslovakian diplomat who went on to teach foreign policy at the University of Denver.

Albright also said she never saw herself as being fit for secretary of state, but former President Bill Clinton, who appointed her, and the Senate, which confirmed her in a 99-0 vote, clearly believed otherwise.

Albright recounted her experiences as the first female secretary of state and explained why she urges women to continue to run for office and become a part of civil society.

Albright’s advice for women wanting to get involved in politics is to be prepared to have to do anything.

“If you say you are going to do something, follow through and do it,” Albright said.

Albright said she ultimately regretted not running for office herself.

Hagel, on the other hand, said his main interest is in public service, but that it was not where his priorities always were. After an unsuccessful college career, Hagel decided to enlist in the Army. After the war, he was working at a radio station when he decided to go out on a limb and move to Washington, D.C. There, he found odd jobs while working to find more permanent and gratifying employment.

Hagel answered questions related to U.S. troops returning to Afghanistan after President Joe Biden had made the decision to pull them out. Hagel said that as a country, we must accept risks when trying to solve any political or military issues.

Per Hagel, in Afghanistan, the United States was attempting to impose American policies on countries that did not want them. In leading by force, not only were America’s relationships with allies at risk, but so was the country’s safety. He stressed that although the United States prides itself on its democratic ideals, the country must take a diplomatic rather than an encroaching approach, Hagel said.

When asked about technological advancements, Hagel said that technology, as with foreign policy, influences everything from perspectives and opinions to ideas and ideals. Hagel went on to discuss the threat of misinformation, especially within the political sphere. Politicians often spread misinformation, which then holds Americans captive.

Both Hagel and Albright extensively discussed the role of Generation Z in the future of the country, too.

“It is important that our best young people get involved in politics,” Hagel said.

Hagel said that the younger generations, with their knowledge of technology and modern problems, will be crucial to finding ways to not only solve the nation’s most pressing issues, but also to take advantage of its most exciting opportunities.

Albright and Hagel also emphasized that in the current political climate, diversity of thought and opinions is a positive, not a negative. In fact, it is what makes our republic thrive.

To that end, the two officials stressed the importance of respecting and listening to others’ views rather than merely tolerating them.

“You must have respect,” Hagel said. “It starts with respect.”

“Democracy is not a spectator sport,” Albright added. “The essence of democracy is being able to understand those with whom you don’t agree.”

For students, Albright’s account of being a woman in politics was inspiring.

“One thing that really stood out to me was that the Madeleine Albright was called “second-tier” by some men of power in our country,” freshman Sophie Daly said. “So, what does this mean? It means that it doesn’t matter what others have to say about you, but rather, what you do and make of yourself.”

Daly went on to say how Albright’s successful career “shows that just because you come from a position where you are always told no doesn’t mean that you can’t achieve greatness.”