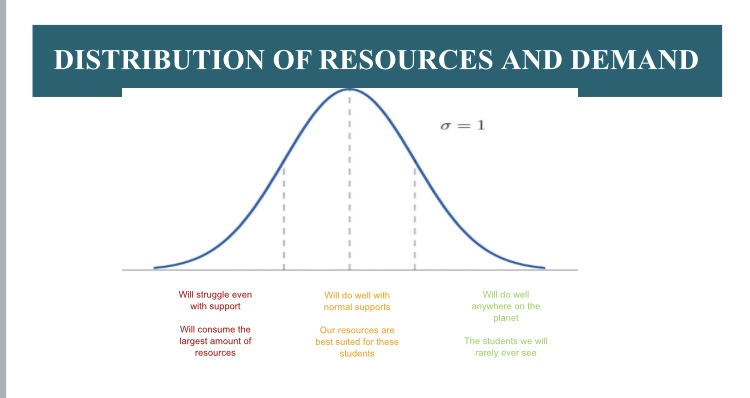 This graph, created by the UCC and presented to the Student Government Senate explains the reasoning behind the new changes to how students can schedule appointments.

The model only allows students to schedule appointments on the day they need them on a first-come, first-served basis. This effectively eliminates the possibility for students to meet with the same counselor more than once.

The new, temporary model works better with the influx of student demand after midterms and before finals, UCC Director Dr. Warrenetta Mann and Associate Director for Community Engagement Dr. Denisha Champion said in a Nov. 2 discussion with the Student Government Senate.

“General incidence of anxiety and depression in the Wake Forest student body is about 40%,” Mann said. “There are seven-to-nine providers, and they cannot see all those students. This means that the first students to schedule appointments regularly are prioritized.”

The issue surrounding the lack of care stems from the nationwide hiring shortage of counselors. The UCC currently has three positions open, according to Mann and Champion.

For now, though, it seems that students seeking regular therapy may be out of luck with the UCC. As such, it may be necessary to seek alternative care, according to Mann and Champion.

“The UCC’s resources are suited to support students who will do well with normal support, rather than those who will struggle even with support,” Mann said.

To students, the UCC is abdicating its responsibility to support those suffering from chronic mental health struggles, which Graff — who attended the Senate discussion — notes are the students who need help the most.

“I was given the analogy of an individual suffering from an eating disorder,” Graff said. “No one believes that an eating disorder is a condition that could be worked on and resolved within this new framework of Rapid Access, as there is no consistent caregiver or counselor who is dedicated to the individual and their health.”

Graff continued: “It is the same with depression and anxiety; the students who need help the most are the ones who come to UCC for care . . .With the onset of Rapid Access and the elimination of Wake Forest-provided continuous care for those who need it, many are now suffering more.”

As a consequence of the Rapid Access Therapy model, those wanting continuous, consistent care will likely be directed beyond campus to outside care which, Graff says he believed tuition would cover.

“I have had multiple students approach me who were worried about the new change,” Graff said. “Wake Forest has declared that students seeking continuous care will have to go off campus, and some cannot do that.”

Graff continued: “As a result of this, students will have to pay out of pocket for care that the university previously provided as part of our tuition. [The UCC] made no promise to subsidize any part of the costs associated with seeking outside care, including transportation or insurance copay costs, even though it is its policies that are forcing students to take this route.”

Although this shortage evidently impacts the center’s staff, Graff believes there should be a better solution to prioritizing student wellbeing.

“I understand the UCC’s rationale for the change. They have unfilled positions for counselors, and this has forced them to consider alternatives to traditional continued care and longer-term support,” Graff said. “But, there has to be a better way to provide more comprehensive care to students while balancing the caseloads of the counselors and the needs of the student body.”